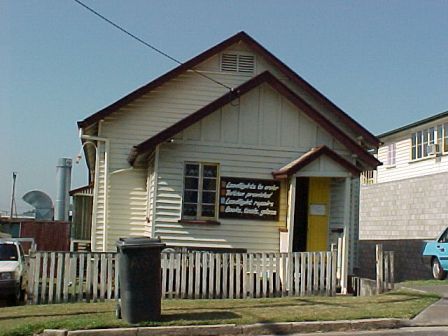 This timber hall was built in 1927 as a lodge hall for the Manchester Unity Independent Order of Oddfellows which established itself in Albion in 1866. Prior to the construction of this hall, the Prince Albert Victor Lodge chapter held fortnightly meetings in the Albion Public Hall, however it was eventually considered unsuitable and in the 1920s, funds were raised to construct a dedicated lodge hall. The order operated as a philanthropic society to which members made regular donations with the understanding that their medical and/or funeral expenses would be taken care of in the event of illness or death. The lodge met regularly in the hall until it was sold in 1983.

The Manchester Unity Independent Order of Oddfellows organisation was originally founded in Manchester, England as a philanthropic society that provided medical and funeral benefits to members and their widows and dependants. An Australian branch of the Oddfellows organisation was established in Melbourne in 1840 when English MUIOOF member Augustus Greaves migrated to Australia. Organisations providing some form of medical and funeral insurance helped to defray the high costs of sickness and death during an era of poor public health standards, high funeral costs and limited (or non-existent) government funding for hospitals and medical expenses. Members made regular contributions to their Lodge funds in return for payment upon death or illness to either themselves or their dependents.

The Queensland branch of the Manchester Unity Independent Order of Oddfellows began in August 1848 when the Loyal Strangers Home Lodge began conducting meetings in Brisbane. By 1863 a separate Brisbane District had been approved and lodges became much more than mutual, self-help health insurers. The organisation was governed by a hierarchy of officers and each lodge met regularly at public or private rooms or halls, while non-members were barred from meetings. Lectures were delivered to Lodge members at meetings and a set of rules were also established to govern the behaviour expected of members during these meetings.

On 26 August 1886 the Prince Albert Victor Lodge was formed at Albion, with meetings being held fortnightly in the Albion Public Hall on the corner of Sandgate Road and Birkbeck Street. For reasons not specified, the Albion Public Hall was considered ‘unsuitable’ to host official visits from District Officers so in 1926 approval was granted from the governing Board of Directors to spend £1300 on a new hall thought to be designed by past grand brother, J. Edgar Young. Tenders were called late in 1926, and construction began early in 1927, just as membership reached 210.

The new hall was being used for meetings from April 1927, however construction wasn’t completed until July. The hall was considered by the Queensland Oddfellows chapter to be a landmark in the district and in the history of Oddfellowship. The hall had ample seating (for almost 300), frosted windows, a new piano, and although electric lights had been installed, failures were an ever-recurring problem, forcing many evening events to be conducted by candlelight. The grand opening of the hall on 15 August by visiting District Officers was an entertaining event, with music, speeches, dancing, ample refreshments and episodic electricity failures.

In the 1920s and 1930s Albion was experiencing another growth period as the surrounding suburbs and those to the north expanded. Urban improvements were proceeding apace and in 1927-28 the Abbotsford Road Bridge at the Albion Fiveways was constructed to accommodate the increased road traffic arising from the suburban expansion to the north. The interwar years also saw the expansion or renovation of many of the commercial buildings in Albion, and the construction of a number of new blocks housing multiple shops.

The hall was owned by the Prince Albert Victor Lodge chapter until 1983 when Robert Barnard purchased the building to be used as a workshop for his business, the locally well-known Albion Glass and Mirror Co. Pty Ltd.  In 1991, an addition was made to the rear of the building extending the glass workshop; however the building has not been substantially altered from its original form and retains its integrity as a former Lodge hall.

as an interwar lodge hall built for the Manchester Unity Independent Order of Oddfellows who began providing essential health benefits for members and their families at a time when the government did not.

as a good example of a small, purpose-built interwar meeting hall.

as the lodge hall for the Prince Albert Victor Lodge chapter of the Manchester Unity Independent Order of Oddfellows for more than fifty years.