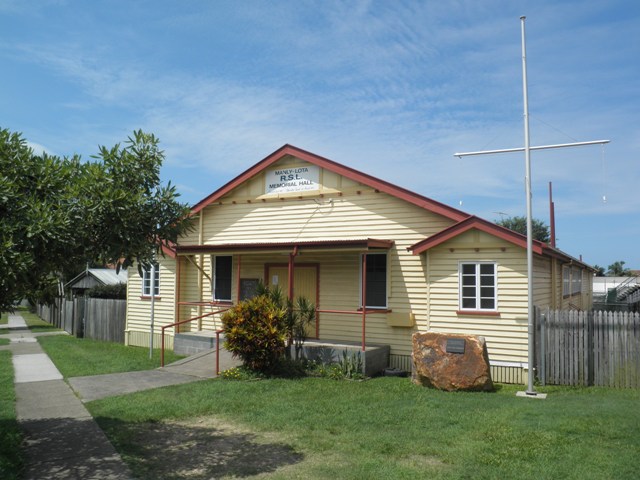 The Manly-Lota RSL Hall was originally built in 1936 as the Manly Progress Association (MPA) Rooms. Established in 1911, the MPA comprised residents and ratepayers meeting to promote the interests of the district. The MPA saw the need for a large, community hall and after its construction it was used for a variety of purposes including fundraising during World War II. The Manly-Lota Sub-Branch of the RSL was formed at the MPA Rooms in 1936 and met at the building until 1940. The Sub-Branch obtained the MPA Rooms in 1952, renaming the building the Manly-Lota Memorial Hall.

In December 1911, a representative meeting of local citizens was held at Paton’s Hall to form the Manly Progress Association. Previously, the needs of the Manly community had been represented by a larger, district organisation, the Wynnum and Manly Progress Association (established 1903). The MPA comprised local residents or ratepayers, who acted in concert with, and sometimes against, the relevant level of government, to promote civic improvements in Manly and Lota. A principle concern was the improvement of public facilities along the Manly foreshore in order to attract day visitors and longer-term holiday makers. Examples of other MPA activities include lobbying the Postmaster-General’s Department for the provision of more public telephones; and approaching the Brisbane City Council for the resurfacing of the Manly Beach Reserve.

The MPA continued to meet at various venues such as Paton’s Hall, the Tidbury Rooms or the state school, in Manly, until 1928. The MPA saw a definite need for a public hall for the local area. Fundraising for the hall’s construction was conducted by the MPA. A variety of activities, such the annual formal ball that began in 1927 at Manly’s Strand Picture Theatre, a 1928 community fete along the Manly foreshore and appeals for public donations were conducted. From 1929, the MPA began meeting at the 184 Melville Terrace, in what was temporary accommodation in a small building. This site comprised 36.2 perches of land that had been in the ownership of Mary Hannah Wright, the wife of Thomas Wright, since 1894. She had mortgaged the land through a loan from developer Benjamin F. Cribb in 1905 and then again on 14 April 1927 via a loan from Benjamin S.F. Cribb. The second mortgage may have been used to fund the construction of the first building used by the Manly Progress Association. On 3 April 1928, this property was transferred from Mary H. Wright to a board of trustees comprising Richard Russell (MPA president), Henry Reese and Thomas Goodman. The MPA is first listed as having ‘Rooms’ at this address in the 1929-30 Edition of the Queensland Post Office Directories. The fundraising for a new purpose-built MPA hall was hampered by the need to pay off monies owing on the existing MPA Rooms at 184 Melville Terrace. Thus the 1928 Manly Fete’s profits had to be divided between “the building fund to pay off the present debt on the association’s meeting hall, and inaugurate a new fund for the progress hall which it contemplates building shortly”.1

By February 1932, £300 had been raised and the MPA decided that “the outstanding need of Manly was a public hall worthy of the large community", with a frontage of 147 feet agreed upon.2 In 1935, the MPA decided that the proposed dimensions of the new community hall were to be 84 feet by 48 feet; while its public accessibility was ensured by the hall being built in the centre of the Manly business district.3 To complete the funding of the new building, the three trustees secured a mortgage through the Queensland Government’s State Advances Corporation on 3 March 1936.

As a result, construction of the second MPA hall began with a stump capping ceremony held on Sunday 29 March 1936. The new hall retained the name of the Manly Progress Association Rooms and was completed prior to August 1936. Furnished with items such as a piano, it was used for a wide variety of functions, including dances. During World War II (1939-45), the MPA Rooms was the centre of local efforts to aid the District Patriotic Fund.

In World War I (1914-18), Australia realised that there would be a need to provide a community-based support organisation for its returning servicemen. A national body, called the Returned Soldiers and Sailors Imperial League of Australia (RSSILA) was founded in New South Wales on 6 June 1916. While this national body included Queensland in its coverage, a separate state association, affiliated to the national organisation, received a separate Charter on 25 April 1917. In 1919, the national returned soldiers and sailors association was reorganised, with the state body renamed the RSSILA Queensland Branch. A Brisbane District association was formed on Anzac Day 1926. It was renamed the South Eastern District Association in 1928.

Across Brisbane’s suburbs, groups of Great War veterans formed local Returned Soldiers and Sailors clubs that became known as Sub-Branches of the District and the national Associations. While unofficial commemorations of the landing at Anzac Cove had been occurring since the first anniversary on 25 April 1916, an official Anzac Day, with its attached public holiday, was not declared until 1927. The Sub-Branches were responsible for organising the local Dawn Service, a local Anzac Day March (if required), celebrations after the March and the Remembrance Day commemorations on 11 November, each year. The Wynnum Sub-Branch also looked after the needs of the veterans who had settled around the Manly-Lota District, particularly with repatriation health care access, the Soldiers Settlers Scheme housing and funeral notices for recently deceased members.

The Manly-Lota Sub-Branch of the RSSILA was formed at a local hut on 26 September 1936. The new Sub-Branch was created so that the local ex-servicemen would not need to continually travel to Wynnum to attend meetings and socialise. Soon after, the Sub-Branch moved its meetings and services to the MPA Rooms. However the Sub-Branch wanted a club house that was separate to the MPA Rooms/community hall. Together with the local RSSILA Women’s Auxiliary, the Sub-Branch commenced fundraising in 1938. Its members continued to meet at the MPA Rooms until 4 October 1940 when the Manly-Lota Sub-Branch clubhouse was opened at the corner of Nelson Parade and the Esplanade, Manly. That same year, the RSSILA changed its title to the Returned Soldiers’, Sailors’ and Airmen’s Imperial League of Australia (RSSAILA) in recognition of those serving in the Royal Australian Air Force (formed 1921).

In the postwar period Manly, like other outer Brisbane suburbs, rapidly urbanised as it filled with new residents and new housing estates. The Manly Progress Association declined somewhat after World War II, but continued to meet until 1981. A contributing factor to the MPA’s decline may have been the death of trustees Thomas Goodman on 1 February 1940 and Richard Russell on 8 April 1949, followed by the retirement of trustee Henry Reese in 1950. On 20 December 1950, Goodman, Russell and Reese were replaced as trustees of the 184 Melville Terrace site by Kevin F.J. Keegan, Oswald M. Addison and John W. H. McMaster.

Because the Nelson Parade RSSAILA clubhouse was cramped and unsatisfactory, the Sub-Branch decided to obtain its old meeting place, the Manly Progress Association Rooms. Negotiations for the full transfer of ownership continued throughout 1951, aided by one of the new trustees, Kevin Keegan, being a Sub-branch member. The transfer of the property was finalised on 14 May 1952, when Kevin Keegan, William M. Gunn and Patrick V. Ryan, of the Manly-Lota Sub-Branch were appointed as replacement trustees of the property. The Manly Progress Association Rooms became the Manly-Lota Memorial Hall.

as a community hall erected by the Manly Progress Association and used by it and local organisations such as the Manly-Lota RSSILA Sub-Branch.