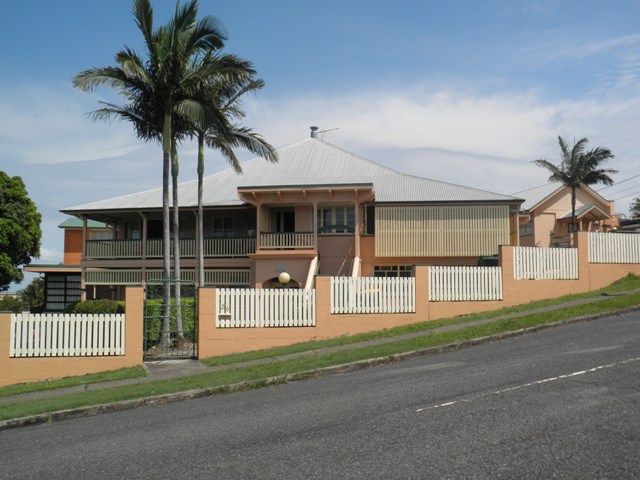 This house was constructed circa 1885 for bank manager James Gibson as a marine residence. It became his permanent residence after his retirement in the 1890s, called ‘Culterfel’. The property was sold to John Henry Hart in 1911, a grazier who also used it as a holiday and retirement residence. Transferred to his trustees with power of sale in 1929, it was sold in 1935 to Archbishop James Duhig. Duhig already owned ‘Wyvernleigh’ across the road and established the St John Vianney parish there in 1930. After alterations ‘Culterfel’ became home to the Presentation Sisters and their school, which opened in 1941. It continues to serve as the Convent of the Sisters of Presentation.

The appeal of Manly as a bayside suburb grew in the 1880s with the subdivision and sale of the 151 acre ‘Manly Beach Estate’. The estate was also known as the ‘Wyvernleigh Estate’, after a residence which had been constructed there. Bank manager James Gibson was the first registered purchaser of allotments in the estate in 1882, and his purchases included this site, fronting Dallie and Waterloo Streets (now Oceana Terrace and Kooralgin Street). He added surrounding blocks to his holding in 1883 and 1885. During that time Gibson also had a marine residence constructed on the site. By 1885 the Queensland Times, Ipswich Herald and General Advertiser was calling attention to a sale of Manly Beach Estate allotments ‘in close proximity to the marine residence of our well-known townsman, James Gibson, Esq.’ Gibson’s house was included in the 1887 estate sale maps, opposite ‘Wyvernleigh’.

Gibson’s house ‘Culterfel’ was one of the first seaside holiday houses constructed in Manly. As manager of the Ipswich branch of the Bank of New South Wales, Gibson and his family primarily resided in Ipswich, but took their holidays in the Manly house. The demand for bayside holiday houses accelerated in the late nineteenth century, as wealthy Brisbane residents took advantage of the opening of railway lines to Brisbane’s bayside suburbs and an economic boom, to create vacation and retirement homes. Most of this development occurred at Sandgate and Shorncliffe, with growth at Wynnum and Manly following in the twentieth century.

Gibson had built ‘a mansion worthy of the site’, according to an 1887 advertisement in the Queensland Figaro and Punch. ‘Culterfel’ faced the bay, with verandas to take advantage of the view. It was slightly less elevated than ‘Wyvernleigh’ but its position was still considered ‘one of the best on the shores of Moreton Bay,’ with an ‘unobstructed and extensive’ view.

Gibson and his wife became the permanent residents of ‘Culterfel’ on his retirement in the early 1890s. After the death of his wife in 1898, Gibson removed to Brisbane and leased the Manly property, which included stables, a coach house and gardens. ‘Culterfel’ briefly became a boarding house in 1909 and 1910 before Gibson’s death in 1910. The property was then sold to John Hart, a Blackall grazier. Hart followed Gibson’s example, initially using ‘Culterfel’ as a holiday residence but later retiring to the property with his wife. The Harts took an interest in the local community, joining clubs and providing the house to host the Manly fete in 1912 and Green Island Scheme meetings in 1920. The house was also used as security for a significant loan of £50,194, which Hart took out in July 1920. The mortgage seems not to have been related to ‘Culterfel’ itself; Hart owned large holdings in western Queensland and the mortgage may have been associated with these. In the late 1920s the Harts removed to a residence in Ascot. The Hart Estate at Manly was offered for sale in 1927, and Hart died a year later in 1928.

‘Culterfel’ and its land, including lots 64 to 69 and 89 to 90, was purchased by Brisbane’s Roman Catholic Archbishop James Duhig in December 1935. Following his appointment as Co-adjator in 1912 and Archbishop in 1917 Duhig planned immense and unprecedented growth within the Church. Over one hundred Roman Catholic churches were constructed in the Brisbane Archdiocese between 1912 and 1928. As part of this growth scheme Duhig purchased large old estates in and around Brisbane, modifying the houses and adding to the sites churches, schools, convents and presbyteries. These included ‘Folkstone’ in Bowen Hills (Our Lady of Victories Catholic Church, 1925), ‘Mount Margaret’ in Wynnum (now Nazareth House) and ‘Wyvernleigh’, across the road from this property.

Manly was ripe for Duhig’s investment, with a growing population but a shortage of Catholic places of worship and education. Wynnum was the nearest worship centre for Manly’s Catholic residents, with a church for Sunday services and the Sisters of Mercy’s convent school providing non-secular education. It was not until Duhig purchased ‘Wyvernleigh’ in 1925 that a church was proposed for Manly. In 1930 the St John Vianney parish was established, ‘Wyvernleigh’ was demolished, and a presbytery erected on the site in 1936. ‘Culterfel’ also played a role in this progress. Although title to ‘Culterfel’ did not pass to Duhig until January 1936, the Archbishop appears to have taken possession of the house early, with ‘Culterfel’ becoming home to the parish priest, Rev Father Butler, in 1930. The lower level of ‘Culterfel’ was reportedly used as a mass centre pending the completion of the presbytery on the former ‘Wyvernleigh’ site. The house was also used for the parish’s social gatherings, holidays for poor children, and a wedding breakfast was held on the veranda in 1931. However, the parish’s use of ‘Culterfel’ appears to have declined over the course of the 1930s, after the presbytery and a church hall were built on the ‘Wyvernleigh’ site.

In 1940 ‘Culterfel’ was remodelled to provide a seaside convent for the Presentation Sisters. The alterations, which cost around £1,700, are likely to have been undertaken by architect Frank Cullen. Cullen trained with Hennessy, Hennessy and Co and ran an architectural firm with Desmond Egan from 1937 to 1941. He was also the Archbishop’s nephew and was responsible for the design of many interwar and postwar Catholic buildings, including the presbytery for the ‘Wyvernleigh’ site (1936), alterations to Mount Carmel Convent at Wynnum (1940), the second section of the Villa Maria Hostel (1940) and extensions to St Joseph’s Nudgee College (1950s).

The property was transferred to the Roman Catholic Diocese Trustees on 14 January 1941. Twelve days later, the St Philomena’s Convent and School was blessed and opened by Archbishop Duhig. It was home to the Order of the Sisters of the Presentation (or Presentation Sisters), who had arrived in Queensland in February 1900. The order focused on outreach, particularly education, and the Sisters established schools and convents in Longreach and central Queensland. Schools in Brisbane followed, including St Rita’s Convent School in Clayfield which opened in 1926, and the Church of Christ school in Graceville in 1937 (now Christ the King Catholic Primary School). A Catholic school for

Manly was foreshadowed by Duhig in 1930, and one of the order’s Queensland pioneers, Mother Ursula, helped select the Manly site in September 1940. Oral history suggests that the Sisters had moved into the Manly convent in December 1940, and the Catholic Leader of January 1941 stated that the Presentation Sisters were seeking school enrolments. The Sisters conducted the school from the convent site, opening with just over 80 students. The school was renamed St John Vianney’s Catholic Primary School and moved across the road to a purpose-built schoolhouse in 1953.

as one of the first large holiday residences built in the Manly area in the nineteenth century.

as a rare surviving example of a large nineteenth century holiday and retirement residence built in Manly.

as it has served as the Convent for the Presentation Sisters since 1941.