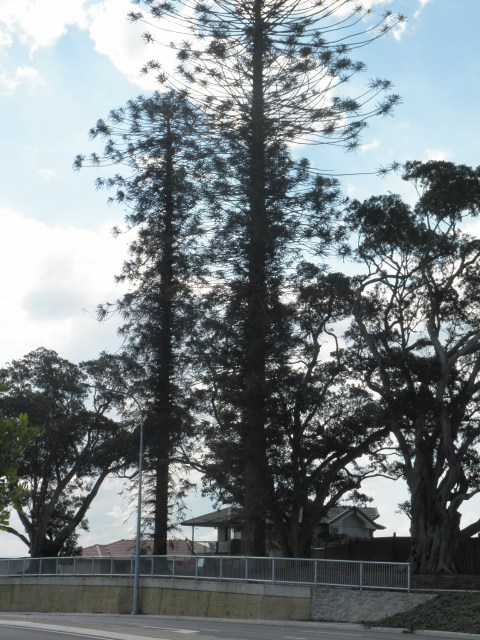 This tree is significant as the only remnant marker of the farm and canning factory established on this site in 1891 by John Hargreaves, a well-known early resident of the Wynnum/Manly area. The J. Hargreaves and Sons factory operated for over 100 years and became an important local industry and employer. The Bunya Pines were planted by John Hargreaves in 1891 and are accompanied by Moreton Bay figs also planted by John, and gum trees which were planted in the 1970s by then Queensland Premier Joh Bjelke Petersen and his wife Flo. Only one Bunya Tree now remains.

According to the Hargreaves family, these two bunya pines were planted by John Hargreaves in 1891, at the entrance to his successful farm and canning factory. Originally 320 acres, the farm was known as “Spring Gardens” due to the presence of an abundant spring which supplied water to the site. Family tradition holds that the trees, referred to as the “two sentinels”, were a symbol of John Hargreaves’ faith in the future of the fruit industry and the Wynnum Manly district. John Hargreaves became a respected member of the local community and served as a councillor of the Wynnum (check dates) and Balmoral (1900-1911) Shire Councils.

Hargreaves and his wife, Hannah, immigrated to Australia from Yorkshire in 1872. Formerly apprenticed to his father in the woollen mills of Yorkshire, Hargreaves initially worked in the woollen industry in Geelong and Ballarat before moving to Queensland in the early 1880s. After successfully selling home made jam in Breakfast Creek, John and Hannah Hargreaves purchased 320 acres at Manly in 1891 in order to set up a farm and fruit preserving business.

The Hargreaves soon built their holding into a successful enterprise, which by the late 1920s produced an annual output worth £92 000 and employed more than 150 people for most of the year. In 1934, J. Hargreaves and Sons was registered as a company.

By the 1930s, the number of staff employed at the factory during peak production times was around 450, making Hargreaves’ factory a significant provider of employment during the years of the depression. Hargreaves were reportedly the largest employer in the Wynnum Manly district. Facilities provided by the Hargreaves family for workers included a tennis court and bowling green on the site, and transport by truck to and from work at designated pick up locations. During World War II, the factory was a protected industry and American soldiers were billetted in front of the site.

According to an article in The Australian Pastoralist Grazing Farmers and Selectors Gazette published in 1929, the factory of J. Hargreaves and Son was well known and respected in Queensland for the uniform quality of its preserves and supplied “much of the preserves and jams throughout Australia and the East”. They received many awards for their products including the Duke of Edinburgh award in 1924 and various RNA awards for trade displays. In addition to the produce grown at “Spring Gardens”, the Hargreaves purchased more than 3000 tons of fresh fruit from growers. From the 1930s, the firm stopped making jams to concentrate mainly on canned pineapple, beetroot and tomato sauce. Their “Gold Coaster” canned beetroot in vinegar became particularly famous.

The Hargreaves family also contributed to the development of the canning industry in Queensland by inventing innovative machinery to assist in the production of canned food. In 1934, Charles Hargreaves, one of John Hargreaves’ sons, invented the first pineapple peeling and coring machine in Queensland – an invention which he patented world wide. Charles’ son, Alex, invented the first beetroot peeling, slicing and packing machine in 1958. The machinery at the factory was initially powered by steam. All three of John Hargreaves’ sons, Charles, Samuel and John B., were active partners in the family business.

During the interwar years part of the Hargreaves’ land holding was subdivided and sold as “The Springs Garden Estate”.

Although ownership of the business passed from the Hargreaves family in 1936 during the depression years, it continued to trade as J. Hargreaves and Sons Ltd. In 1963, the factory was purchased by the Petersville group of companies which includes Edgell-Birds Eye. Members of the Hargreaves family,  continued to play an important role in the life of the factory until the 1980s with one of John Hargreaves’ descendents, Arch Hargreaves, working there for 50 years. Under the Edgell and Birds Eye labels, the factory introduced the canning and freezing of peas and beans to Queensland. The factory closed in 1998 by which time four generations of Hargreaves had been part of this important Manly enterprise.

A house constructed for Charles Hargreaves circa 1915 and named “The Springs” is situated to the east of the site and is not part of this heritage listing.

The group of trees at the site of the former factory also include Moreton Bay fig trees also planted by John Hargreaves and gum trees planted in the 1970s by then Queensland Premier, Joh Bjelke-Petersen and his wife, Flo.

The factory buildings have been cleared from the site in preparation for development of the land as a residential estate. The bunya pines are a well known local landmark and play a significant role in marking the site of the former Hargreaves farm and canning factory which operated for over a century. The important role of the Hargreaves family in the history of the district and the landmark value of the century old bunya pines has been recognised by the local Wynnum Manly community.

These two trees are identified as examples of Auracaria bidwillii. Their age is approximately 110 years old. The trees are part of a group of trees under a Vegetation Protection Order (VPO) which are adjacent to Manly Road, on the southern boundary of the allotment. The group includes four Moreton Bay Fig trees.

as a marker of the site of the canning factory established in 1891 by John Hargreaves, providing evidence of the history of farming and manufacturing in the Wynnum/Manly area from the late nineteenth century.

for the large scale and structural qualities of the trees in addition to their health, beauty and landmark value.

as trees planted by John Hargreaves, a notable resident and businessman of the Wynnum/Manly area from the late nineteenth century.