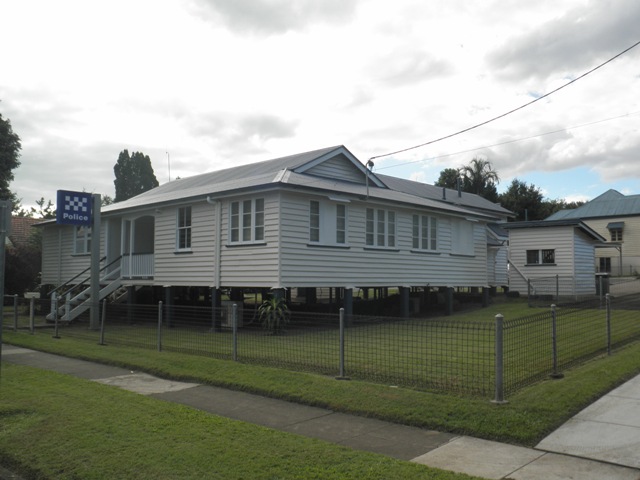 The land on which the Moorooka Police Station is situated was part of a combined landholding of approximately 119 acres purchased by Francis Henry Tamm in the early 1860s. In 1869 this sizeable area between Ipswich and Beaudesert Roads was transferred to James Cowlishaw and Sir James Garrick.

For both Cowlishaw and Garrick the land was an investment. An architect who arrived in Brisbane from Sydney in 1860, James Cowlishaw was connected with a number of organisations, notably the Brisbane Courier and the Brisbane Gas Company. From 1878 to 1922 he was a member of the Queensland Legislative Assembly. His home, Montpelier, was located in Bowen Hills.

In the early 1880s Charles McGinty purchased approximately 38 acres from Cowlishaw and Garrick, selling it the following year to Gilbert Lang who in turn sold it to John Lloyd Bale in 1884. At the time the South Coast Railway was under construction and a station platform, completed in 1886, was proposed for Moorooka. From the opening of the line in 1885 it was possible to travel to and from the city conveniently each day. Surveyors Hamilton and Raff surveyed the land into residential allotments. Advertised as the ‘Rocklea Township Estate’, a sale by auction was held on 13 September 1884. At the time many other estates were also available to buyers and overall sales were slow.

A police presence at nearby Rocklea was established as early as 1885. Following the damage received during the 1893 flood the station at Rocklea was reported to have moved to a rented house on Ipswich Road until a permanent station and residence was constructed. Plans for the new building, drawn up by 4 March 1915, are attributed to Deputy Government Architect Thomas Pye (1861-1930).

Born in Lancashire in England, Pye migrated to New South Wales circa 1882. He joined the Queensland Public Works Department two years later, resigning from and rejoining the Department on more than one occasion before being appointed Deputy Government Architect in September 1906. He retired in 1921.

On 2 June 1914 Jasper Bott’s 1 rood 10.8 perches was transferred to the State of Queensland. Tenders for the Moorooka Police Station were called in the Queensland Government Gazette on 15 May 1915. The lowest tender, from H. Cannon for £659.10.0 for the construction of the station (which included residential accommodation), outbuildings consisting of a single cell lock-up with verandah, a stable with a stall and a fodder room, along with the necessary fencing, was accepted. Utility services to the office and residence were added only gradually. It was a decade before electricity replaced kerosene lighting.

The first police officer to reside at the Hamilton Road station was Constable T. W. Devere. Mounted patrols took him as far afield as Coopers Plains, Runcorn and Yeronga. At the time the station’s outbuildings included a stall and fodder room in which Devere’s horse was stabled. Another police officer resident of the station was Constable Flori, who was appointed to Moorooka in 1926.

As a consequence of the Police acting as relief agents for the unemployed during the Depression of the 1930s, office space was always in demand. The necessary alterations and construction of an additional office with new verandah and stairs were completed for a cost of £141 in 1932. A washhouse was constructed in 1935.

Throughout the 1930s other requests were made for alterations to the station, considered too small to accommodate the increased numbers who passed through on relief days. In 1937 a feed room was converted for office use and a sleep-out enclosed. Space was still a problem in 1939 when officers made use of the nearby Oddfellows Hall for the payment of relief money each Friday.

During the 1940s minor alterations also were made. In 1952 plans were drawn up by Chief Architect HJ Parr to extend the office. The station remained a police residence as well as station until land was purchased at the corner of Hamilton and Beaudesert Roads for a new residence in 1968. In 2004 the building still operates as the Moorooka Police Station.

as a police station established in Moorooka at the beginning of the twentieth century.

as one of the few remaining suburban police stations built during the early twentieth century.

as a combined police station and residence.

for its connection to the Queensland Police Service, who have used this building as a station and work residence for more than 90 years.