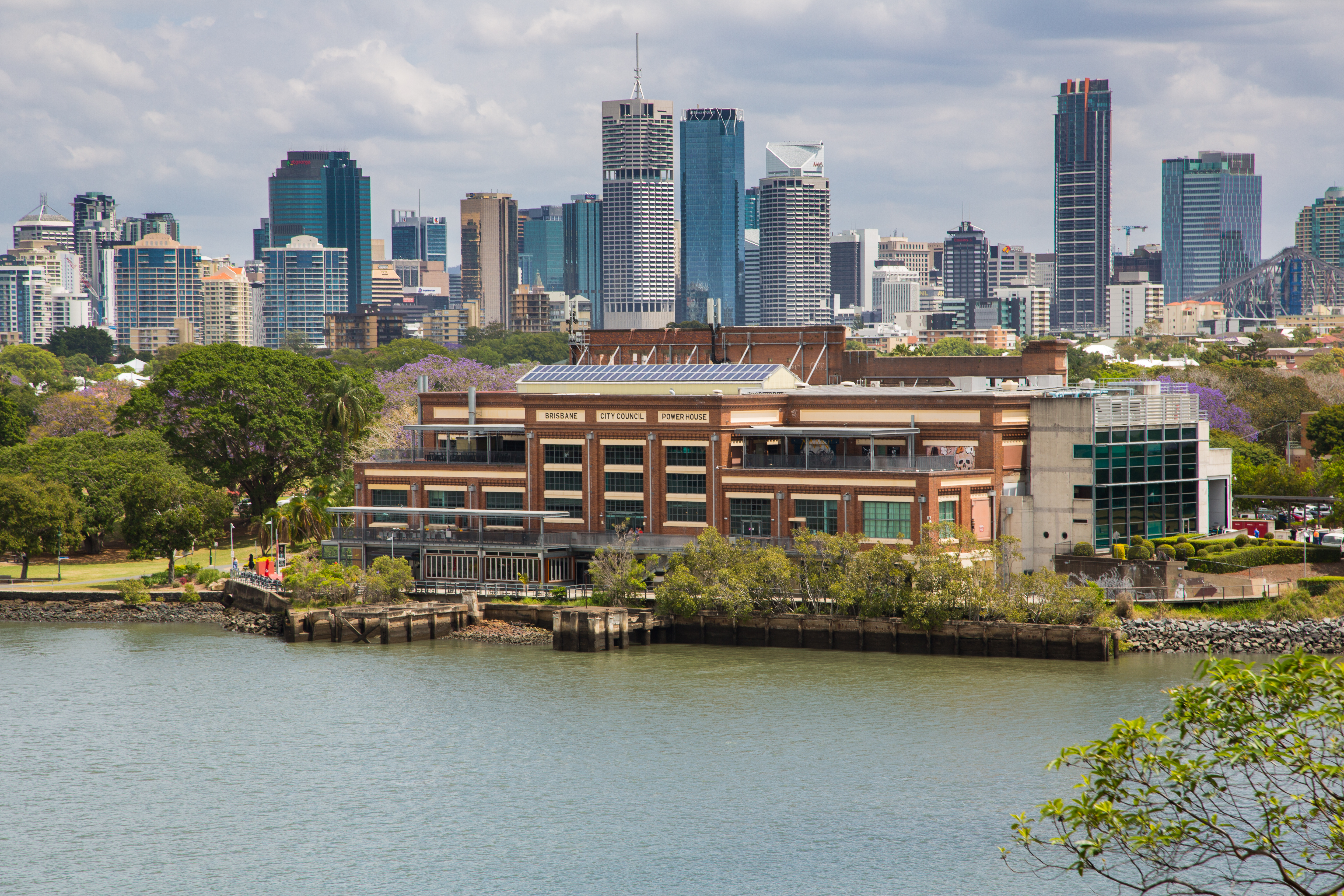 The robust and powerful form of the New Farm Powerhouse is testament to the once-vast extent of the Tramways operations in Brisbane. The significance of the structure has been maintained in its conversion to a performing arts complex, retaining the strength and simplicity of its form and allowing important remnants to tell their own story of the building’s history. The Powerhouse is an important landmark on the New Farm peninsula, visible from the Humbug and Bulimba Reaches of the Brisbane River. The Powerhouse is an important, large-scale work of the Tramways department’s architect, Roy Rusden Ogg.

The New Farm Powerhouse was built in 1928 to provide power for Brisbane’s expanding tram network and power and lighting for the suburbs of Toowong, Ithaca and Yeerongpilly. The Powerhouse was designed by Roy Rusden Ogg, the architect for the Brisbane City Council’s Tramways Department. He was also responsible for the design of eight Tramways substations. In 1929 the first section of the stores building was constructed.

The Powerhouse was constructed in two stages in response to increasing demand for power supply. The first stage comprised the turbine room and boiler house. In 1934 the turbine room was extended and the switch house, the portion facing the River was built. The stores building was also extended in this year. An additional bay to the boiler house was added in 1936 along with a staff accommodation wing. A major and final extension to the boiler house was completed in 1940.

During the post-War years the Powerhouse operated at peak capacity. In 1963, operations of the Powerhouse were passed over to the Southern Electric Authority, later to become the South East Queensland Electricity Board (SEQEB). The powerhouse was decommissioned in 1971 when it was superseded by the Swanbank Power Station. SEQEB continued to occupy the site as a works depot. Generating plant and ancillary structures were removed in the late 1970s. Fears about the security and stability of the boiler house section led to its partial demolition in 1984. In 1989 most of the Powerhouse site was transferred to the Brisbane City Council.

In the years after it was made redundant the structure was subject to neglect and vandalism. In the years prior to its conversion it was occasionally the venue for dramatic theatre and rave events.

In 1991 the Urban Renewal Task Force recommended a review of the structural and financial feasibility of retaining the New Farm powerhouse for public or residential purposes. Subsequently the Brisbane City Council initiated the proposed development of the powerhouse into a cultural and performing arts venue. The Powerhouse arts complex brief was developed through extensive public consultation and with direction form the Urban Renewal Task Force. A collaborative team of Architects with specific experience – City Design (theatres), Cox Rayner (urban design) and Allom Lovell (conservation) developed the design. Construction commenced early in 1999 and the complex was completed in 2000.

The New Farm Powerhouse complex is an imposing brick structure on the Brisbane River beside New Farm Park. Its conversion to a centre for the performing arts in 1999/2000 has not diminished its rugged presence and the building retains many links with its former function.

The main building’s external walls “are carefully composed architecturally to form a tripartite division” (Allom Lovell 1998), p. 10). The plain rendered basement walls contrast with the more elaborate treatment of the brickwork above.

The main volume of the building is “strongly articulated to provide a rhythm of vertically proportioned openings and piers” (p.10). The use of restrained decoration, the strongly horizontal parapet and the articulation of the building’s volumes tend to break down the scale of the structure. By contrast the sheer, raw face of the remnant wall on the north west side of the building provides evidence of the vast scale of the boiler house.

The 1999 conversion acknowledges and expresses the various phases of the building’s existence. From its days as the powerhouse for the entire tram network through to its recent years of dereliction, evidence of each era has been selected and retained. The additions to the complex are generally light, framed structures. The entry structure in particular, punctuating the massive boiler room wall, provides a telling contrast between the old and the new.

The site of the demolished boiler room is now a large entry plaza, its boundaries suggested by the low remnants of brick walls. New pedestrian paths link this space with New Farm Park and the new Powerhouse Park on the north east side of the building. A new galvanised steel-framed canopy delineates another path from the plaza to Lamington Street. The one remaining full-height boiler room wall is now the dramatic entry elevation of the complex. The brickwork retains its scars and stains and the insertion of a slender glazed entrance foyer heightens the mass and scale of the wall. A series of morse code emitting lanterns occupies existing openings and penetrations.

The entry leads into the former turbine room, which accommodates most of the performing arts facilities in the complex – a rehearsal room and 200 seat thrust theatre at river plaza/basement level, a 400 seat flexible theatre at entry plaza/ground level and a general performance area in the huge foyer void at the southwest end of the building. The switch room provides a bar and gathering spaces at ground level, with spectacular river views through the large existing windows. A new restaurant will operate in the basement or river plaza level of the switch room, while the Powerhouse administration occupies the top level.

A new concrete and glass extension on the north east of the building houses dressing rooms and the production offices of resident arts companies. Throughout the building, commissioned artworks such as Julie Rap’s Power Walker and Sheridan Kennedy’s Optogemel are interspersed with remnants of old powerhouse machinery and the restless patterns of existing graffiti.

The new built work is robust and functional in keeping with the original.

The Stores building
The Store building is a simple, elegant structure. Like the main building, the walls are of load-bearing brick, articulated into a pier and panel system but entirely rendered. The Stores building accommodates rehearsal space, offices, amenities and a 12m high studio for ‘physical theatre’. It is linked to the entry courtyard via a new access bridge, lift tower and open stair. The main alteration to the stores building fabric is the removal of the existing roof. The new metal-clad roof has been raised above parapet level to accommodate the physical theatre studio.

The Powerhouse has undergone major renovations in the course of its conversion to a performing arts centre. Restoration and stabilisation of the existing building fabric was accorded high priority in the works. It could be assumed that the building is in good condition. Inspection of the building fabric of such a large complex is beyond the scope of this report.

as evidence of the scale of the former Tramways network.

as a powerhouse structure that retains the robust form of the original buildings and allows remnant structures and equipment to evoke its past functions.

as an important element in the historic urban landscape of the New Farm peninsula.

for the evidence it provides, along with the Tramway substation network, of the architectural work of R.R. Ogg.