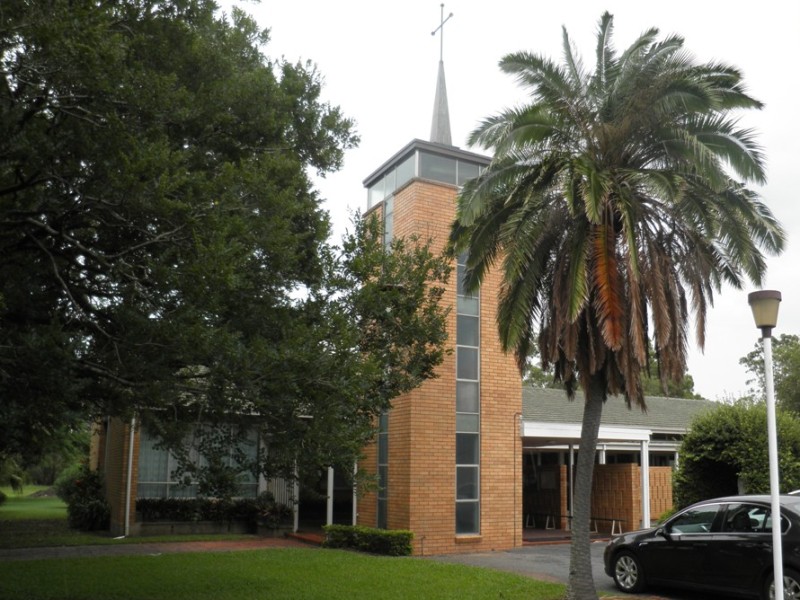 St John’s Church was built in 1962, eleven years after it was proposed for construction with the adjacent St. Jon’s Convent School. This church is the only non-military place of worship that was built specifically as a Royal Australian Navy War Memorial. The church contains a Roll of Honour of the sailors who enlisted in Brisbane during World War II and later died during that conflict.

The site of this church was originally part of 1 acre, 2 roods and 11 perches of freehold land sold to John Fraser on 19 December 1863. The land was designated Portion 153 in the parish of Toombul. William John Munce purchased Portion 153 on 27 January 1874. He transferred it to Frederick Ahles on 9 November that same year. Ahles, an engine fitter, resided at Boyd Street, Nundah.

Mary Jane Edgar, the wife of Henry Edgar bought Portion 153 on 6 December 1912. The Edgar family subdivided the land and retained subdivision 1 of Portion 153. On this block, they built the family home c1915. The farmhouse and land was sold to Ada Caroline Cambage, the wife of Walter Cambage on 28 May 1918.

The opening of the Holland and Mackenzie factory on Toombul Road prior to World War I and the construction further along Northgate Road of the Northgate Rail Workshops in 1914 attracted more residents. This part of Northgate, known as Northgate East, saw its first housing development (‘Station Estate’) in 1918. ‘Hala Estate’, bounded by Toombul and Melton Roads plus Allworth and Edgar Streets, was subdivided for sale on 11 October 1924. A dedicated but unformed road, Best Street, ran through the Estate’s centre joining Edgar Street to Melton Road. Melton Road was known as North Coast Road at this time. The six allotments on the corner of Toombul Road and Melton Road were sold. Another 12 houses were erected on the blocks at the corner of Melton Road and Allworth Street.

On 22 August 1929, the former Edgar farm was sold to the Catholic Church. Such was the population growth in the area that the Church chose to utilize the Edgar farmhouse as a temporary church, presbytery and parish meeting centre to meet community needs.

After World War II, with the housing boom, the vacant blocks in Northgate began to fill with new homes and new residents. As well, employment opportunities improved. In 1946, a Queensland fruit grower co-operative began construction of the Golden Circle cannery on ex-US Army land on Earnshaw Road, Northgate. Golden Circle soon became the largest single employer in the area. The former US Navy warehouses along Toombul Road were leased to a variety of business including GMH Holden and Athol Hedges car body maker. In 1952, the US company Kraft converted one of these warehouses into a processed cheese factory, while Wunderlich opened a tile factory in Crockford Street.

Such was the area’s post-war population growth that the Catholic Church built its first school at Northgate a decade before it built its first church in the suburb. The usual scenario saw a church building being constructed first, followed later by a school for the children of the parishioners. Catholic Archbishop James Duhig laid the foundation stone for Northgate’s first school – St John’s Convent School and located centrally the at the corner of Nudgee and Fraser Roads on 8 April 1951. Northgate State School did not open at the end of Amelia Street until 27 January 1959. The school took its first enrolments for the 1952 school year. Ironically as the new convent school attracted more Catholic families to the area, the inadequate worship facilities provided at the old Edgar farmhouse became increasingly evident and presented a poor image to both the Catholic pupils and their parents.

The situation remained in this unsatisfactory state of affairs for the following 10 years after St. John’s school opened. The original 1951 building application submitted to the Brisbane City Council was to build St. John’s School and Church together. Perhaps a lack of available funds allowed for only the school to be built. Further applications to build the church were made in 1957 and 1959. By the beginning of the 1960s, a campaign to obtain a proper church building was led by the Northgate Parish priest Rev. Fr. V. Rowan. Final approval for construction of the church was gained from Council on 8 February 1962. The foundation stone was laid and blessed by Archbishop Duhig on 13 May 1962. A modern, brick, glass and tile church was constructed beside St. John’s school and it was completed in August 1962. It cost £34,000 to build. The former Edgar farmhouse remained as the Presbytery.

The design architect was Frank Leo Cullen. He was born c1909 in Brisbane and was the nephew of the Catholic Archbishop of Brisbane James Duhig (‘Duhig the Builder’). Thus he was employed by the Catholic Church to design churches and other religious or educational buildings. Cullen also designed St. John’s School.

What made the new St. John’s Church unique was the decision to dedicate the building as a Royal Australian Navy (RAN) War Memorial Church. It was the first Australian church of any denomination that was built to honour the war dead of the RAN. King George V had proclaimed the creation of the RAN on 10 July 1911. By 1962, the RAN had fought in World War I, World War II, the Korean War and it was about to enter the Malayan Emergency followed by the Vietnam War. On 2 March 1962, the Queensland branch of Naval Association presented Fr. Rowan with a Roll of Honour plaque that listed 171 names of the RAN personnel who had enlisted in Brisbane and subsequently died during World War II. The Roll of Honour is mounted on the outside wall at the base of the bell tower. There are also a cast-iron RAN emblem shield and a brass dedication plaque placed at the (main) Nudgee Road entrance to the church.

On Sunday 5 March 1962, St. John’s Church was officially opened and blessed by Archbishop Patrick Mary O’Donnell. O’Donnell was Duhig’s Coadjutor and the last Irish-born bishop to be appointed to high office in the Australian Catholic Church. In attendance at this dedication ceremony was the Commonwealth Minister of the Navy John Gorton (later to become Prime Minister), the Officer-in-Charge (OIC) of RAN Eastern Australia area Rear Admiral G.G.O. Gatacre and the Naval Officer-in-Charge (NOIC) for Queensland Commander J. Ferguson.

Due to declining enrolments, St. John’s Convent School closed at the end of the 1995 school year. A time capsule was laid on 10 November 1995 by the last students of the school close to the small Grotto of the Virgin Mary that is located beside the church. The church remains in use, particularly for Sunday Mass services.

St. John’s Church remains as Australia’s first and only RAN War Memorial Church. The only other similar structure is the Naval Memorial Chapel of St. George the Martyr at the H.M.A.S. Watson naval base on the cliffs situated above South Head, Sydney. It is a small, military chapel whereas the St. John’s building is a large, civilian church. There is a certain irony in locating a Naval War Memorial Church on this Northgate site. It is very close to the Toombul Road naval warehouses that comprised the largest US Navy supply depot built during World War II in Brisbane.

containing a Roll of Honour listing the names of those RAN members who enlisted in Brisbane and later died in World War Two.