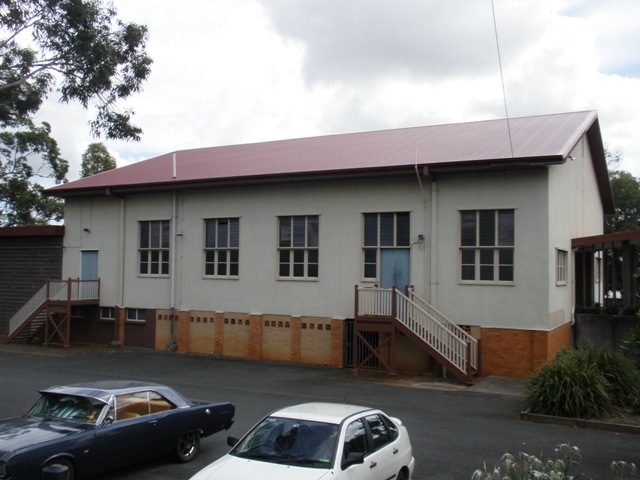 The Nundah Memorial Hall is important because of its role in the social life of the local community. The Hall has been continuously used as a venue for public meetings, dances and classes since 1953. The building is a rare and intact example of a post-World War Two community hall, that demonstrates the austerity that characterised the architecture of the time.

The Nundah Northgate Memorial Hall Building Fund Society was established in 1948, and its constitution duly produced. The Society was created because of the district’s lack of a Public War Memorial and of facilities capable of catering for public, cultural, educational or recreational activities.

The hall was built as a public memorial to the 1st and 2nd World Wars, and designed to be managed as a community centre. The foundation stone of the hall was laid by the
Queensland Governor, Sir John Lavarack, on 23 May 1953.

A lease was granted to the Trustees of Nundah-Northgate Memorial Hall Building Fund Society from 8 September 1954 to 13 June 1968, at a rental of, £10 per annum. The Trustees took out a mortgage in 1954 to the English, Scottish, and Australian Bank Limited, presumably to finance construction of the hall. Medium term leases were continued to 1989.

In 1982-84 the area underneath the hall was bricked under ostensibly to avoid vandalism, the hall was repainted internally, and the inside was relined with panel board below window level.

Over the years the hall has been used extensively by local community and educational organisations. It has been hired out for dancing classes, senior citizens’ dances, and for other uses as diverse as a country and western music club, coin and stamp collectors group, Red Cross, aerobic classes, the RSL, and local state and private schools.

During 1990 the Trustees arranged that the interior, entrance and external front of the hall was painted, and windows repaired. BCC carried out maintenance to the site including the replacement of eaves soffits and timber supports on the rear section of the building, and the replacements of eaves, guttering, down pipes and repair to roof.

The Nundah Memorial Hall is a large community hall that has undergone few changes since its construction in 1953. The large main volume formed by the hall itself is unadorned inside and out, reflecting an austerity that characterised architecture in the post-War years. A 1970 concrete block extension to the rear of the hall is no less austere. The hall is supported on a face-brick perimeter wall with concrete stumps supporting the floor. The walls are steel framed and the cladding is finished in smooth rendered surface. The side walls feature five large window sets, comprising timber framed casements and louvres above. The roof is a simple gable. The extension features split-face concrete blocks and a flat roof concealed by a deep fascia.

The hall entry is from Bage Street, although at the time of writing this report, the street had disappeared into major excavations for the Nundah Bypass on Sandgate Rd. The concrete entry stairs rise to a simple portico, formed by an awning/ skillion and supported on each side by closely spaced timber posts. The hall is entered through three pairs of frosted glass doors. Egress from the hall is provided by a series of timber-framed stairs at the side of the building.

Inside, the hall features a polished hardwood floor and a rendered ceiling that spans the space in a single faceted arch. The raised stage area has angled wings and a simple proscenium opening. The change rooms and amenities are housed in the two-storey extension behind the stage area.

A brief visual inspection of the building reveals it to be in generally good physical condition, but there is evidence of water damage to the vaulted ceiling in the main hall. Some of the external render is cracking in places.

The 1970 extension complements the original building and is scaled and positioned so as not to detract from the large unadorned volume of the hall.

The building is part of what was once an attractive community precinct on Bage Street, comprising the Hall, adjacent library, two attractive school complexes and the Corpus Christi church with its landmark dome. The precinct, along with its visual and pedestrian amenity, has been shattered by the roadwork excavations.

as a community facility developed by local residents in the early 1950s.

as a combined war memorial and community centre built after World War Two.

as a well-utilised facility, it has a strong and special association with diverrse community groups and educational facilities in the area for over forty years.