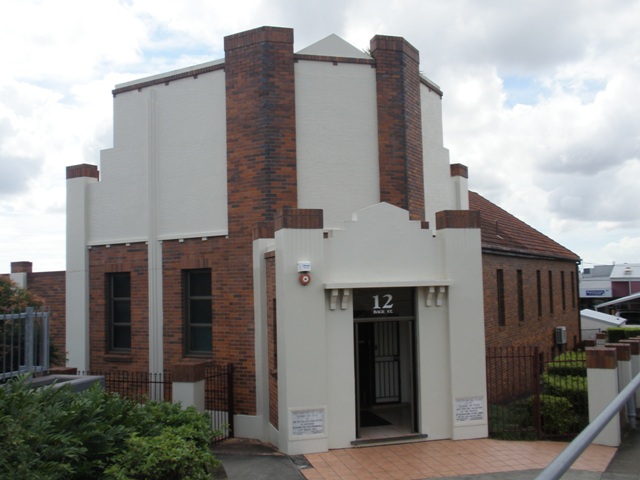 This brick building was built by the Salvation Army in 1952 to replace an earlier hall in nearby Sandgate Road which was destroyed in a cyclone in June 1948. The new hall’s foundation stone was laid in March 1952 by Brisbane’s Lord Mayor, Sir John Chandler. On 23 Augus that year, the £8,500 building was officially opened by the Salvation Army’s Territorial Commander, Commissioner Joshua James.The hall, which had silky oak interior woodwork, was designed by Mr Beaven, a Salvation Army Territorial Property Inspector. The building contractor was Mr E.M. Masters. Church and community donations contributed to the cost of the new building, including contributions from 64 RSL branches. The Salvation Army sold the hall in 1994 when the Nundah congregation merged with other local groups and moved to a new location at Taigum.

The Salvation Army was established in London in 1865 by William Booth, a Methodist minister. Guided by a mostly Methodist theology, the organisation sought to bring “salvation” to the poor whilst meeting their physical and spiritual needs. By the 1880s, the Salvation Army was active in Brisbane with Sandgate and Nundah among the earliest corps.

A Salvation Army Hall was established in Sandgate Road, Nundah circa 1890. In addition to holding spiritual meetings, the Salvation Army reached out to the local community by providing social gatherings and classes in skills such as cooking and baby care. After the hall in Sandgate Road was destroyed in a cyclone in 1952, the organisation began planning for a new hall to be built at Nundah. In December 1950, 54 perches of land on the corner of Bage and Boyd Streets which included a timber residence, were purchased by the Salvation Army from Mrs Isabella MacPherson. After the new hall was built, the residence was removed from the site.

The new hall in Boyd Street was designed by Salvation Army Territorial Property Inspector, Mr Beaven and the building contractor was Mr E.M. Masters. Most of the cost of the new hall was raised by the Salvation Army. At the annual State Congress at the Ann Street Temple on 24 June 1948, retired Salvation Army Brigadier committed to helping raise £3,500 to build a new hall at Nundah. Donations were also received from community groups such as the Returned Services League. A bond between Australian servicemen and the Salvation Army was forged from the time of the Boer War when the charitable organisation provided physical and spiritual comfort to the men.

By the time Brisbane Lord Mayor, Sir John Chandler, laid the foundation stone of the new hall on 30 March 1952, over £4,000 had already been raised. An additional £600 was donated towards the building costs at the ceremony. The building was the first Salvation Army hall to be constructed in Queensland since World War II.

The new building was officially opened by the Salvation Army East Territorial Commander, Commissioner Joshua James, on 23 August 1952. Four hundred guests, including Mr Alexander Dewar, the local State member of parliament, and members of the Returned Services League (RSL) attended the ceremony. The hall, which cost an estimated £8,500 featured an interior of silky oak woodwork. Mr Clive Harburg, President of the South Eastern Districts Branch of the RSL addressed the audience, praising the work of the Salvation Army during two world wars and their commitment to assisting young people in the Nundah district.

The hall continued to serve the Salvation Army community until the 1994. At this time, the Salvation Army was amalgamating local corps into larger churches. The Nundah Corps joined with Sandgate and other groups and moved to the North Brisbane Hall at Taigum. The hall at Nundah was no longer needed and was sold.

In 1994, the new owner, Business Assistance Pty Ltd, constructed a brick addition along the northern side of the building.

The former Salvation Army Hall is a small but imposing post-WWII, two storey building situated on the corner of Bage and Boyd Streets at Nundah. It is constructed of face brick and cream rendered brick with a tiled hipped roof.

The main hall is parallel to Boyd St and is terminated at the Bage St end by an imposing two storeyed wall which forms the front of the entry foyer and rises up to form a parapet past the ridge of the main roof behind.  The main entrance to the building is via a small portico, set at 45 degrees to the main body of the building and addressing the street corner.  Behind the portico, the wall incorporates two engaged brick piers which form the corners of the wall, rising past the parapet and contrasting with the cream rendered brick of the upper part of the wall.  The rendered finish to the wall of the upper part of the foyer has been used to lighten the otherwise massive front wall of the building as well as to accentuate the entrance.  The parapet extends around to enclose both sides of the corner of the building.

The main brick hall has a row of windows along its length with corresponding windows/doors along the lower storey. A similar double row of windows adorns the eastern end of the building. There is a narrow brick extension on the northern side of the hall.

The site includes a masonry and iron railing fence which has been partially rendered in cream in a similar style to the hall.

as a fine example of a post-war community hall.

for its striking design, use of contrasting materials and strong visual presence on this corner site.

as a place of worship built by the Salvation Army which served the local congregation and wider community for more than forty years.