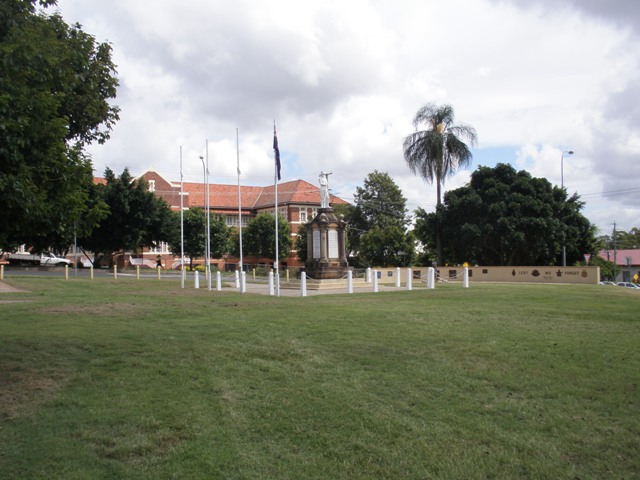 The park is important to the local community as a place commemorating the district’s involvement in the major wars and offensives of the 20th century. A conspicuous local landmark, the Nundah War Memorial is an elegant, striking monument standing at the high point of a sloping open grassed area. Important for its design achievement, the well conceived arrangement is a good example of the work of the notable Ipswich mason Frank Williams. The early inscriptions on the monument are important in reflecting the attitudes of nationalism and imperial sentiment of the period of the Great War.

The land the park now occupies was part of a parcel of land purchased in 1855 by George Bridges. After subdivision, the park land was purchased by his son Samuel Bridges in 1875. Samuel Bridges’ widow, Mary Bridges, sold the land to the Toombul Shire Council in 1909. The dedication date of the land as a park is uncertain. The park was known as Buckland Park, named after John Buckland a member of the Toombul Divisional Board and MLA.

The Toombul War Monument Committee organised for a monument to be erected in the park. Designed and executed by F. Williams & Co. Ipswich, a well-known and highly regarded masonry firm, the monument was unveiled by the Governor on Remembrance Day 11 November 1921. A field gun and flagpole were placed in the park east of the monument. Early photographs indicate palm tress flanked the memorial near Chapel Street. These appear to be the existing palms. A perimeter planting of Camphor Laurel trees was undertaken in the late 1930s. The tree remaining in the northeast corner may be a remnant of this planting.

In 1998 the park was renamed Nundah Memorial Park.

The site has been disturbed by recent roadworks, during which all vegetation and structures other than the memorial monument were removed from the park. At the time of inspection it was not clear in what form the park would be reconstructed.

Before this recent disturbance, Nundah Memorial Park, formerly Buckland Park, occupied a rectangular block of grassed open park bounded by Buckland, Bage and Chapel Streets. From 1921 the park was an open grassed area sloping uphill from east to west and contained the war memorial monument, a flagstaff and trophy gun in an east-west line at the western end. Later a single row of camphor laurels was planted to the north, west and south edges and more recently additional planting and play equipment were added.

Following the recent roadworks, the Park has been subdivided to reflect State Government control of the large road tunnel that passes beneath the Park. Consequently, the Council tenure is restricted to the two ends of the park, while the State Government owns the central portion over the tunnel below.

War Memorial Monument
A richly sculpted sandstone mausoleum bearing the statue of a sombre soldier facing east standing at ease, the monument stands on a bevel-edged concrete slab on an elevated grassed plateau to the west end of the park. The monument is approached from the east by a flight of concrete stairs and is surrounded by low tapered stone bollards to the perimeter of the slab. A stepped base of concrete and quarry-faced sandstone supports the mausoleum which has corner ionic columns crowned by aedicules. A marble plaque to the east face of the mausoleum records that the monument was erected by the residents in honour of the enlisted from the Shire in the Great War. Dates “1914” and “1919” within a wreath and words “King and Empire” are carved in relief to the east roof and pediment of the mausoleum. The south face marble plaque commemorates those involved in offensives between 1945 and 1995 and the north face plaque commemorates those who served in the armed forces of Australia, British Commonwealth and our Allies during the Second World War. Dates “1939” and “1945” are carved within a wreath below soldier to the north.

Three flagstaffs stand to the south of the monument. A tall palm stands to the northwest and southwest and a line of palms stands on the east boundary. A shade tree to the northeast corner of the park may be a remnant of earlier planting.

A brief visual inspection reveals that the monument has some surface damage to the stone faces and carving which could be partly due to sandblasting undertaken at sometime. The soldier and perimeter bollards have been inappropriately painted. The trophy gun has been removed. The early flagstaff has been removed and/or relocated. The monument shows signs of weathering and needs cleaning.

as a remnant of an early 20th century memorial park.

as a commemorative structure erected as an enduring record of a major historical event.

as a conspicuous landmark, an elegant and striking mausoleum bearing a life-size statue of a soldier standing at the ridge of a grassy slope.

as a sacred and special place for commemorating the involvement of the district in the major offensives of the 20th century.

as a fine example of the work of the highly regarded monumental masonry firm of Frank Williams.