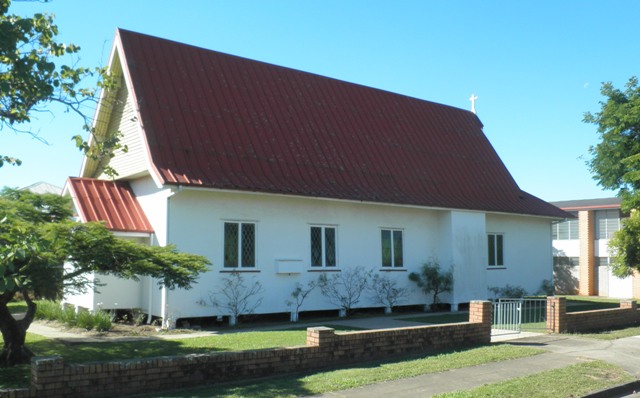 Designed by noted Brisbane architect Robin Dods, The Church of the Holy Spirit was constructed in 1904 as a chapel at the Eton High School for Girls. Later it was to serve the St Francis Theological College. It was moved to its present site in 1936 after the College was relocated to Milton. The Church has a longstanding connection with the parishioners of Nundah and has been in continual use since its construction.

The Corporation of the Synod of the Diocese of Brisbane acquired the land the Church of the Holy Spirit is located upon in October 1936. Prior to this acquisition the property was part of over 21 acres that had been under the ownership of the War Service Homes Commissioner.

Sources indicate that the Church was originally constructed for the Eton High School for Girls. The chapel was originally designed by Robin Dods, based upon his plan he used for the church at “Cressbrook”, Toogoolawah.

Eventually the chapel became part of St Francis Theological College. When the College moved to Milton the chapel remained

…unused and was to be moved to allow an extension to Boyd Road.
The Nundah Parish of St Francis felt that the chapel should remain in the district, and a petition to this effect was signed by local residents to use the building as a daughter church to St Francis in Cavendish Street. In 1936 two allotments were purchased and cleared at the corner of Imbros Street and Olive Street. The contract to move the chapel was given to Guymore and Wright, and in October 1936.1

The Church was dedicated on 7 February 1937 by Archbishop William Wand. He is also reputedly to have suggested the name of the chapel be Church of the Holy Spirit as “students now worshipped in the Chapel of the Holy Spirit at Bishopsbourne, Milton.”2

It would be envisaged that there would undoubtedly be a need for an additional church in the area to cater for expanding numbers of worshipers. During the early interwar period the commercial centre of Nundah was developing. A picture theatre had been established in c1918 and had undergone refurbishment in c1930. This growth undoubtedly flowed onto the adjacent suburb of Wavell Heights. This is exampled by the nearby Nundah Private Hospital, now Cadogan House, which opened in late 1933.

The Chapel is originally credited as the work of Architect Robin Dods. New Zealand born architect Robin Dods, together with his business partner John Hall, are credited with achieving “an architectural revolution in Brisbane.”3 This was principally achieved by Dod’s use of timber in construction. This chapel was originally constructed in timber. The design may be seen as an example of his work.

The church still is utilised as a place of religious worship.

This chapel presents as a purpose designed and constructed early c20th lowset place of religious worship. The building is constructed of timber with a high roof sheathed in tin. At the eaves the roof is bell shaped.

A small roofed and enclosed porch denotes the entry to the church. According to notes made on the building the chapel is constructed of single skin VJ walls, varnished internally, with at one time, a design of religious significance being painted on the ceiling. An altar was supplied for the church from the nearby Tufnell Home.

Further notes on the building include that there were wooden singles on the roof and these were replaced with ribbed iron in c1949. In addition the main entry was moved from the Olive Street end to the Imbros street end in c1958 and a porch erected. The church was rendered with stucco in c1959.

as it is a purpose built place of worship that was constructed in response to the needs of the growing Nundah community; first as a school chapel and later, as a place of religious worship serving the wider parish.

as a purpose built religious building associated with the Church of England.

as it is an early chapel associated with the former Nundah Eton High School for Girls, St Francis Theological College and the Anglican Church at Nundah, thereby making it a prominent and enduring site in the lives of many Nundah residents.

as an existing example of the religious architecture of notable and influential Queensland architect Robin Dods.