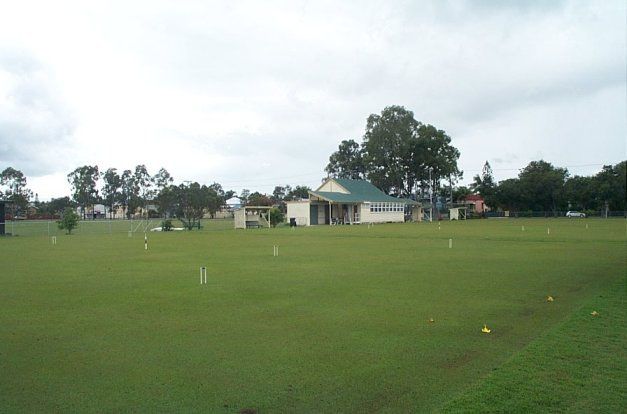 Associated with the early development of the Nundah district, the landmark Oxenham Park has been a place of recreation, sport and leisure since the early 20th century. The Park continues to be an important place for the local and wider community to meet, relax, play and engage in organised sport. A collection of dedicated playing fields, Oxenham Park has an important association with the Toombul District Cricket Club, the Mayne Tigers Junior Australian Football Club and the Toombul Croquet Club. Accommodating the Nundah Golden Years Centre, the Park has an important association with the Northern Suburbs District Senior Citizens. The well-tended array of croquet playing greens with associated clubhouse and green side seating and the fenced cricket oval with associated sightscreens and spectator stand, together with the prominent perimeter stands of eucalypts and other vegetation form an important visual element in the streetscape. Named for the Oxenham family the Park is important in recognising the contribution of the family to the district and to cricket in Brisbane.

The area bordered by Melton Road, Jenner, Duke and York Streets was originally known as the Nundah Recreation Reserve. In 1881 part of this land was owned by the Queensland Railway Carriage Wagon and Tram Car Company and the balance was leased by the Queensland Meat Export Company (QMEC). The QMEC section, known as “bullocks’ paddock”, was used for resting stock unloaded at Nundah railway station prior to being driven overland to the QMEC works at Pinkenba. When the railway line to Pinkenba was completed, stock went directly to the works. Around this time the Carriage Company was downgraded as most of the construction of carriages was undertaken at the Ipswich Workshops.

The park has had a relationship with a number of community organisations and sporting clubs, including the Nundah Cricket Club (Toombul District Cricket Club), the Northern Suburbs District Senior Citizens, the Toombul Croquet Club, Nundah Tennis Club, Toombul United Soccer Club and the Mayne Tigers Junior Australian Football Club, since its establishment.

The Shire of Toombul organised its first Soccer Club in 1922. Together with the Soccer Club, the Toombul Cricket Club petitioned the Shire Council to erect a stand and dressing room accommodation on the oval. The new grandstand was erected in 1923.

The park was known as the Nundah Recreation Reserve until 1939 when, following a request from a deputation representing residents of Nundah, the Toombul District Cricket Club and the Queensland Cricket Association to the Lord Mayor of Brisbane, Alderman W.J. Green, the name of the park was changed to Oxenham Park in recognition of Queensland cricketer Ron Oxenham and the work undertaken on the Park by the Oxenham family. Augustus Emanuel (Gus) Oxenham dedicated much time and energy to cricket administration and to establishing the park and the cricket club. In addition to playing for Toombul Cricket Club, his sons Lionel and Ronald played for Queensland. Ron also represented Australia in seven tests between 1928 and 1932.
During 1940-41 the Nundah/Northgate Company of the R.S.L. Volunteer Defence Corps used the area as a training ground.

During the 1967-68 season the grandstand was dedicated as the N.J. Plaisted Stand, named in memory of late member Norman Plaisted. Sadly a fire in September 1982 left only the base of the stand.

In 1984 Oval No.2 was named the La Frantz Oval after Sam La Frantz and his son Errold La Frantz, M.B.E., both successful cricketers, Errold representing Queensland in the 1941-42 season, and both men playing for Toombul Cricket Club and active in cricket administration.

The Toombul Croquet Club was founded in August 1928 and successfully applied to the Brisbane City Council for an area of land in the Nundah Recreation Reserve to be set aside for the purpose of constructing two croquet courts. The Club was initially granted a twenty year lease at a rental of £5 per court per annum. The Club members developed the grounds and facilities, undertaking a number of fundraising ventures including bridge parties, dances and interestingly, the issuing of £5 debentures, to fund the work. In 1929 a former school house building was acquired and moved onto the Toombul Croquet Club site to be used as a clubhouse pavilion. Erected as the Hendra Day School in the late 19th century, the building was the schoolhouse for the former private school conducted by the Misses Franz in Dora Street, Hendra. The Club continues to be an important social and recreational organisation in the Nundah area. In 2002 the Club, together with a number of other Brisbane croquet clubs, hosted the Australian Croquet Championships.

Oxenham Park stands east of Nundah Railway Station on a flat rectangular grassed block bounded by York, Melton, Jenner and Duke Streets, Nundah. The Park accommodates the Toombul District Cricket Club, the Mayne Tigers Junior Australian Football Club, the Toombul Croquet Club and the Nundah Golden Years Centre. A popular thoroughfare for local residents making their way to/from the Nundah Railway Station, the Park is distinguished by perimeter plantings of tall eucalypts to Melton and Jenner Streets and a prominent poinciana standing to the corner of Duke and York Streets.

Toombul District Cricket Club
Entrance to Toombul District Cricket Club facilities is near the corner of York and Duke Streets through a gateway formed by a pair of stout brick piers supporting a blue-painted metal arch framing “TDCC Oxenham Park” in red-painted metal. A slab on ground masonry kiosk and club pavilion overlook the Ken Mackay Oval which is bounded by a hollow metal tube perimeter fence. A small uncovered tiered timber spectator stand stands to the southwest of the Oval, white-painted timber sightscreens stand to the north and south of the Oval and practice nets stand to the northwest. The Alan Skuse practice nets are located southeast of the Oval.

A second cricket oval, the La Frantz Oval, available for public use, has a practice net to the southeast of the Oval and a small masonry skillion roofed pavilion to the southwest.

The Park is important as a collection of dedicated playing fields that have remained in continuous use since the early 20th century.

A brief inspection of the Park reveals that the Ken Mackay Oval, fencing and sightscreens are in a satisfactory condition however the practice nets to the northwest are in an unkempt state. The Toombul District Cricket Club kiosk and pavilion are looking fatigued and together with the spectator stand require maintenance and painting. The Alan Skuse nets are in good condition.

The Toombul Croquet Club appears to be in good condition. The playing greens are well tended and the associated greenside furniture and clubhouse are well maintained.

as an early twentieth century recreation reserve in the Nundah district.

as an area of open parkland accommodating the dedicated playing fields and pavilions for the resident cricket and croquet clubs.

as an area of open parkland bounded by distinctive stands of perimeter trees and accommodating dedicated sporting facilities, in particular the timber croquet pavilion with associated well-tended greens and green-side furniture, and areas for general recreation within a suburb setting.

named for the Oxenham family in recognition of their contribution to the district and to cricket.