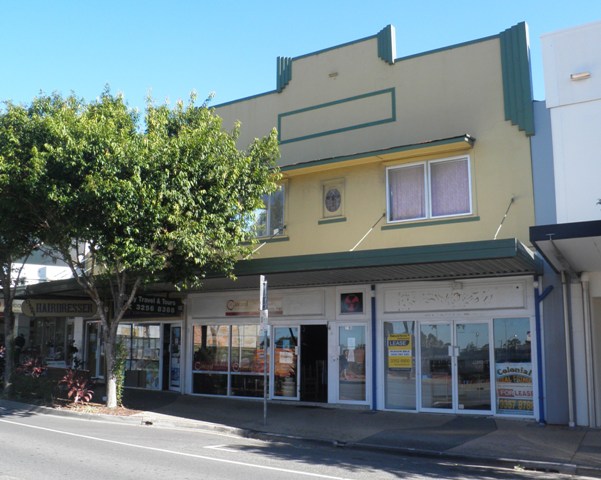 This interwar commercial building comprising three stores was constructed circa 1920 for chemist Henry Thomas. Thomas established a chemist shop in the centre store and leased the two outer stores. It remained in use as a chemist's for many years, mostly under the ownership of Alexander Shearer. In recent years the stores have been adapted to other purposes, including a thrift shop, restaurant and travel agency.

The original deed of grant was issued on this property in July 1856 to George Bridges. The land then passed through a number of owners, including the one time Lord Mayor of the Shire of Toombul, Isaac Stuckey. Stuckey purchased the property in June 1885 during the land and building boom of the 1880s. The land, following Stuckey’s death in 1902, remained under the ownership of the Stuckey family, with Stuckey’s widow apparently marrying Isaac’s brother James. At this stage the property was 2 roods in size.

Following the death of both James and his wife, in 1915 and 1906 respectively, the land was gradually sold off in small parcels between the years of 1916 and 1919. It was at this time nearby Chapel Street was created. From this sale Henry Thomas purchased just over 17 perches. Thomas ran a chemist shop in nearby Station Street at Nundah.

Thomas constructed the shops at 1192 Sandgate Road sometime between 1919 and 1920. It building comprised then, as it does now, of three shops with the chemist store located in the centre shop. The other tenant was the Commercial Bank of Australia.

Unfortunately, Thomas died shortly after its construction. Following the settlement of his estate the shop was sold to Alexander and Maude Shearer. Shearer had previously operated a chemist store at South Brisbane and this property remained in the Shearer family until the late 1970s.

The shop was constructed during the early interwar period at a time when the northern end of the commercial centre of Nundah was expanding. The picture theatre had opened around 1918 and the middle of the 1920s saw further commercial premises being constructed and opened in the locale.

Prior to WWII the store was given its present Art Deco style facade. This style of facade in conjunction with the remodelled Imperial Picture Theatre situated across the road would have produced an attractive shopping precinct during the interwar period at the Nundah commercial centre.

This is a typical commercial building erected in the early interwar period on the street alignment of Sandgate Road in Nundah.  The front of the building is of two-storey rendered masonry construction with an asymmetrical street frontage above the awning line.

The stepped parapet conceals the corrugated iron roof of the building. A pattern of decorative moulding lines the perimeter of the parapet. The parapet contains two large windows and a smaller circular window located centrally in between. A masonry slab overhang shades the windows from above.

Behind the main rendered masonry façade the building is clad in timber and roofed with a corrugated iron hipped gable. Metal rods provide structural support for the suspended awning above the building entry.

The building makes an important contribution to the streetscape of Sandgate Road as its form and materials are part of the commercial pattern of the street.

as the shop was built at a time when this part of the Nundah commercial centre was expanding in response to the steady growth of the district.