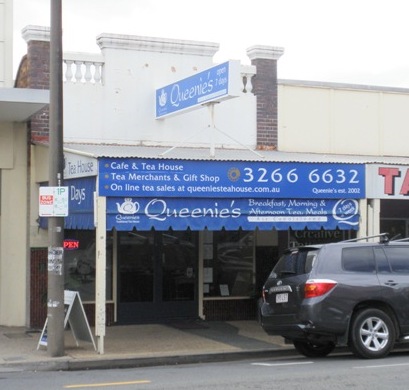 This single storey brick building, which originally opened as the Imperial Cafe, was constructed between 1922 and 1925 for Florence and Charles Rose who owned the Imperial Picture Pavilion picture theatre next door. It was at this time that this part of Nundah began to be developed commercially and a shopping precinct emerged, evidence of which can still be seen along Sandgate Road today. The Roses leased the cafe to Misses Little and Auld, and Miss Little ran the cafe until the picture theatre was closed and subsequently demolished in 1965. In 2002, the shop was reopened as a traditional teahouse.

The Imperial Picture Pavilion opened circa 1918 and operated as a picture theatre until its closure and subsequent demolition circa 1965. The owners of the theatre, Florence and Charles Rose, who lived locally, erected the café obviously aware of the need for such an enterprise in close proximity to their picture theatre.

Land for the café was purchased in December 1921 and according to Post Office Directories it was operating by 1925. At the time of purchase by the Roses the size of the allotment stood at just over 16 perches. Gradually, over the years due to the need for easements and pressure for space within the Nundah shopping precinct, the allotment has been reduced to just over 8 perches in size (207sq.m).

The owners leased the café to Misses Little and Auld.  Miss Alud retired some years later and Miss Little apparently continued until the theatre was sold. During the late 1990s,  the shop was operating as an Opportunity Shop run by St Vincent De Paul.

Evidence indicates that until the mid 1920s the section of Sandgate Road, inbound, between Station and Park Streets contained only two buildings, the picture theatre and Dyer’s store A number of buildings, principally shops, were subsequently erected after this time.

The Imperial Picture Theatre at Nundah, operating for over 50 years, was particularly important to the community not only as an entertainment centre, but also a centre

where community events could be, and were, staged. The need for refreshments in the café next door would have been part of the entertainment and recreation offered.

In 2000, during a period of growth and rejuvenation in the commercial precinct of Nundah, the building was reopened as Queenies’ Traditional Teashop.

Built on the street alignment of Sandgate road in Nundah, this single storey commercial building was built in the early 1920s. The building's front elevation from Sandgate Road is characterised by its brick construction and corrugated iron awning.

It has a symmetrical frontage with a rendered brick parapet and a separate awning attached to the front. The awning is a skillion roof supported by two square timber posts along the Sandgate Road facade. The shop signage is mounted on the awning front, between the supporting timber post.

Two brick pillars bound the parapet on either side. The parapet is stepped symmetrically about the building’s frontage decorated by masonry balustrading and capped with a masonry cornice. The building makes an important contribution to the history of the streetscape of Sandgate Road as its form and scale are part of the pattern within the history of the street, relating to commercial usage.

as a remnant of the commercial hub which was established along Sandgate Road, Nundah during the interwar era.