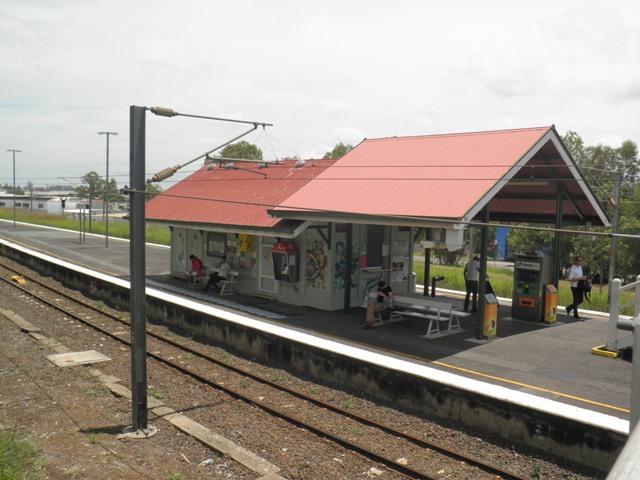 The Salisbury railway station ticket office and footbridge are significant as evidence of the establishment and subsequent expansion of rail transport services from South Brisbane to Beenleigh. As part of that rail system, Salisbury station has served the local community's transport needs for more than a century. The site developed throughout the twentieth century and the present ticket office, constructed in 1950 is a good example of the precast concrete buildings that Queensland Rail erected at stations since 1919.

Salisbury Railway Station ticket office and footbridge form part of site first used for railway purposes in the mid-1880s. Discussion on the need for a railway line to service the agricultural areas to the south of Brisbane commenced late in the 1870s. By June 1884 a railway line from the city served residents south to Logan Junction (now Yeerongpilly), before branching west towards Corinda. An extension of this line to Beenleigh and the South Coast, commencing at Logan Junction, was first proposed in 1882. Construction appears to have commenced in 1884. The first section of railway line to Loganlea, including the new Salisbury station, was opened to traffic on 9 April 1885.

With the development of this transport infrastructure a number of portions of nearby land were subdivided into residential estates. These included the Salisbury Park Estate (1888), the Salisbury Court Estate (1890) and the Salisbury Station Estate (circa 1890s). Although an efficient means of travelling to the city was now available, an oversupply of allotments and the economic downturn development of the 1890s meant that by 1900 the number of households in Salisbury still totalled only nine.

The first railway station at Salisbury was constructed on the eastern side of the then single line, but was relocated 700 metres south to its present site in 1891.

In 1950, when work on line duplication was undertaken, the former weatherboard station building on the eastern side of the then single line, with its skillion roof sloping away from the platform, was replaced by the current pre-cast concrete building. This new ticket office and waiting room was located on an island platform between the inbound (western) and outbound (eastern) tracks. A footbridge to allow passengers to move safely to Fairlie Terrace/Lillian Avenue in the east and Dollis Street/Beaudesert Road in the west became necessary.

The section of footbridge to the east, towards Fairlie Terrace and Lillian Avenue, is built to the standard design used by Queensland Rail throughout the twentieth century and is of timber frame construction with timber treads, deck and landings. This type of footbridge is now familiar only on the Brisbane metropolitan lines and the Ipswich to Toowoomba Main Line.

The section of footbridge towards Dollis Street and Beaudesert Road is not included in the listing.

The station office is of standard E6 design and measures 12 feet by 32 feet. The material used is pre-cast concrete. The office is situated on an island platform. Shades (extensions of the office’s gable roof) cover both sides. The footbridge is a standard traditional design, constructed in timber and steel.

as the ticket office and earlier (timber) section of footbridge are evidence of the establishment and subsequent expansion of rail services to the local area in the early to mid twentieth century.

as it is an existing 1950s precast ticket office built to a design Queensland Rail used since 1919 with associated timber footbridge (part).