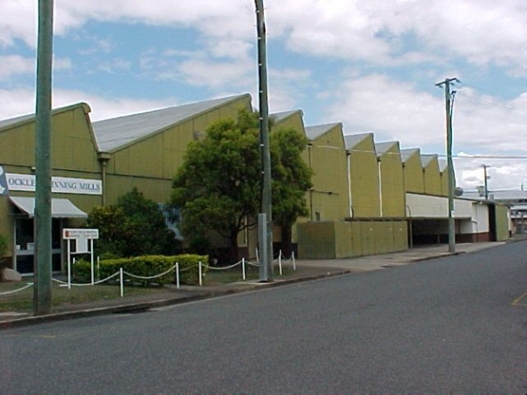 The former S.A.A. Case and Assembly Shop (Building No. 1) is important as the first building constructed in the Rocklea Munitions Works and the only purpose-built Small Arms Ammunition factory constructed in Queensland during the Second World War. Completed as part of a rearmament program financed by the Commonwealth, this building demonstrates the degree of technical achievement reached nationally in the construction of ammunition factories during the Second World War. When wartime production was at its peak, a minimum of 1,300 people worked in this building.

The former Small Arms Ammunition Case and Assembly Shop (Building no. 1) was constructed in 1941, one of approximately eighty buildings that comprised the Rocklea Munitions Works.

The former SAA Case and Assembly Shop was the primary structure within the Rocklea Munitions Works. The building housed the necessary machine tools to form two ‘plants’, each of which produced and assembled small arms ammunition cartridge cases, then filled and packed them ready for shipment.

Foundation plans for the former SAA Case and Assembly Shop were prepared in February 1941 and forwarded to the Queensland Main Road Commission, which commenced excavating the site on 10 March. Approximately 160,000 cubic yards (122,330 cubic metres) of earth had to be cut and filled to level the area of 138,600 square feet (12,876 square metres) which the building covered. Construction commenced on 23 March 1941. Detail working drawings continued to be produced by the Works and Services Branch of the Department of Interior throughout March, April and May.

Specialists were brought in from other facilities to oversee the setting up of the SAA Case and Assembly shop. EJ Glayde, who previously had overseen SAA factories in Victoria and South Australia, was appointed engineer in charge of SAA production from January 1941 and remained so until April 1942. Appointed at the same time, engineer JA Layard stayed two years with the Rocklea Works before moving to the Ordnance Factory at Maribyrnong. Operations within Building 1 were overseen by two other staff members. AG Taylor oversaw the case and bullet production; FF Fairlay was in charge of filling and assembly.

The cost of equipping the building with the necessary machinery and equipment was significant. Approvals were gained for expenditure of £300,000. The building became the largest SAA factory in Australia.

Limited production of Small Arms Ammunition commenced in November 1941, even before all the machinery and equipment had been delivered and all the associated buildings completed. The ammunition produced differed in calibre, as can be seen in the table below.

In addition, the SAA Case and Assembly Shop reconditioned and repacked 1,526,000 rounds of .30 inch carbine ammunition and 15,000,000 rounds of .450 inch Thompson submachine gun ammunition for the American Ordnance Depot in Brisbane.

To ensure this large building provided as unrecognisable a target as possible, it was covered with what camoufleurs called ‘garnishing’. Through the use of netting and other camouflage devices the building was made to look like a quarry surrounded by scrub.

The number of employees working in the SAA Case and Assembly Shop rose and fell with production. Generally two shifts operated, each overseen by six foremen. Between April and November 1943 employee numbers ranged between 830 and 1043. Women outnumbered men by a ratio of more than two to one. Production increased dramatically from late 1943, as did the number of people employed in Building No. 1. Between January and August 1943 the total number at work in the SAA Case and Assembly Shop was never less than 1,300. From March to July 1943 the number of females employed there each month was always greater than 1,200. Absenteeism was a problem. On one notable day, Friday 26 June 1943, of the 1,728 then employed in the SAA section, 485 were absent from duty.

In a July 1943 conference in Melbourne it was agreed to transfer the whole factory area to the Department of Aircraft Production for the purposes of aircraft engine overhaul. Production of SAA in Building 1 ceased in September. By the end of November all plant was cleared from the building in preparation for a take over by the engine overhaul contractor.

Postwar the building became part of the Salisbury Industrial Estate and was occupied from the late 1940s by Rocklea Spinning Mills.

as the first building constructed within the former Rocklea Munitions Works, built as part of Brisbane's mobilisation for World War II.

as one of the buildings within the only Munitions Works established in Queensland during the Second World War.

as a large building constructed as part of a rearmament program and according to a design used nationally for the manufacture of munitions.

as a building within an industrial site which at its peak employed up to 3,000 workers each day, many of who were women, whose previous participation in the workforce had been neither technical nor considerable.