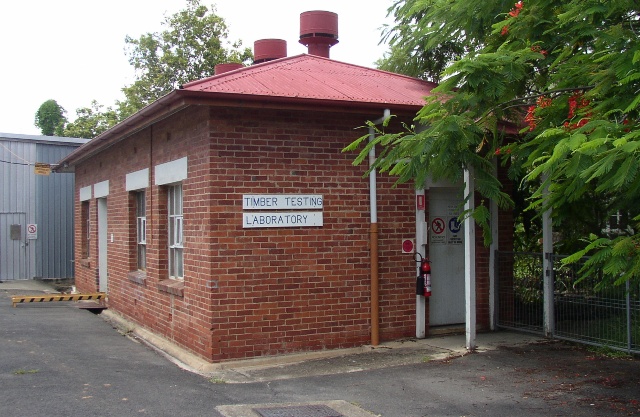 Both these buildings are part of the former Rocklea Munitions Works, which was established during World War II to manufacture small arms ammunition for Australian and American forces. The Chronograph House was constructed to house the precision chronographs required in the testing of ammunition. The Velocity Range Building housed the small arms used to test the ammunition. Since the war both have been adapted to serve other purposes.

External ballistics is what happens to the bullet and residue outside the firearm, including the direction and velocity of the shot as well as any deviation in trajectory. To check the ammunition’s velocity required determination of its power factor using a chronograph. With power factor and bullet weight (number of grains) known, velocity could be calculated.

Plans for the Velocity and Casualty Ranges were produced in mid-1941. Manufacture of ammunition commenced in November 1941, with the first lot of Mark VII ammunition passed of use in February 1942.

as the Chronograph House and Velocity Range Building were built to serve specific wartime goals as part of a large munitions manufacturing establishment. They illustrate therefore the impact of the Second World War on the Rocklea/Salisbury local area.

as the Chronograph House and Velocity Range Building were constructed for the purpose of testing ammunition within the only munitions works established in Queensland during the Second World War.

as these buildings formed an integral part of an industrial complex which at its wartime peak employed up to 3,000 workers and therefore made a lasting impact on the lives of those employees.