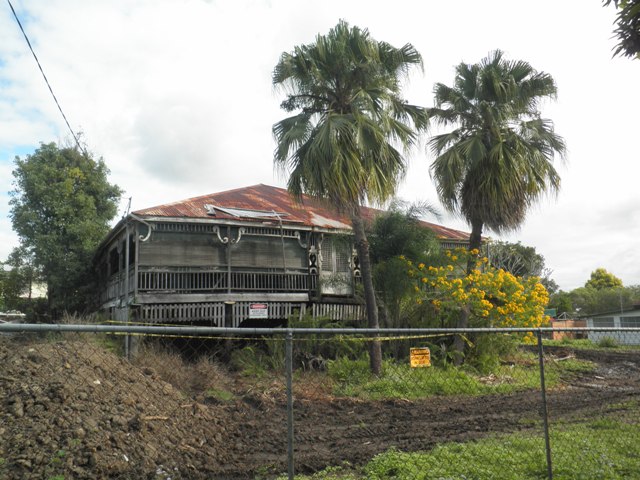 This Federation Bungalow style residence was constructed circa 1920, during a period of significant growth in Salisbury. It was built for the Schmutter family, who were early and active members of the former Salisbury Congregational Church. Still owned by the Schmutter family today, it remains as one of very few intact houses of this style in the area.

In August 1862 Francis Lahey purchased four portions of open forest land, a total of 224 acres in what was then known as Coopers Plains, for £224.10.0. Francis Lahey and his wife Alicia then constructed a homestead in Portion 174, approximately where today’s Nyanda State High School is sited.

The Laheys arrived in Queensland from Ireland in 1862. They named their new home Bellissima Forest, after the ship which had brought the family to Sydney. Between 1862 and 1873 cotton, arrowroot, corn and a range of fruits, including pineapples, were grown on the farm. The attraction of richer farming land on the Brisbane River and at Pimpama led to the sale of the majority of Bellissima Forest to close relation Isaiah Ferguson in 1873.

The new title for 178 acres was issued to farmer and former gold prospector Isaiah Jeremiah Ferguson in July 1873. This land was not destined to remain agricultural for long. Construction of the South Coast Railway initially connecting Brisbane with the agricultural communities south to Beenleigh, commenced in the mid-1880s.

With the arrival of the railway in 1885 and ready transport to and from the City, Ferguson was interested in subdivision of his land. Correspondence with the Queensland Department of Railways indicates he intended to convert ‘Bellissima Estate’ into over 1,700 allotments. Isaiah Ferguson died in August 1889 without having subdivided his land, 122 acres of which was transferred in 1890 to his sons, schoolteacher Henry John Ferguson and Robert Wesley Ferguson, the latter described as a ‘gentlemen’. Had the land been subdivided for sale at this time it is unlikely to have been success. The Depression of the 1890s and an oversupply of allotments for sale in suburbs closer to the city led to a general stagnation in sales.

In December 1911 Arthur Alexander Blackwood of Sydney purchased Portions 175 and 176 and part of Portion 174 from the Ferguson brothers. Subdivision of what became known as ‘Blackwood’s Salisbury Township Estate’ commenced from August 1912.

The local history publication, A closer look at Salisbury and Nathan Heights, records that John and Minnie Schmutter arrived from England in 1906-07 and moved to Salisbury in 1909. Editions of the Queensland Post Office Directory from these years do not confirm this. John Schmutter’s name is listed only once prior to that time, in the Queensland Post
Office Directory alphabetical listing for 1913-14. For these years he is recorded as residing in Gladstone Road, Highgate Hill.

According to Certificate of Title information, ownership of 3 acres 8 perches of the Blackwood’s Salisbury Township Estate, Subs 114, 142, 143 and 144 of Portion 176, was registered to John Thomas Schmutter and Minnie Elizabeth Schmutter in April 1920. John Schmutter is first recorded as a resident of Salisbury in the Queensland Post Office Directory for 1922-23. At the time the suburb still had fewer than 100 households.

John Schmutter is believed to have been a cabinet-maker employed by Carricks Ltd. From the 1920s the furniture-manufacturing warehouse established by this company was located between North Quay and Saul Street, Brisbane. During that same decade and until 1944 a Miss Minnie Schmutter, believed to be his daughter, is recorded as a dressmaker (later costumier) with an establishment at 113 Queen Street.

The house built at 143 Henson Road is an example of the Bungalow style which was popular between 1900 and 1920. It was also a style which was safe, familiar and easy to
construct. The house is larger and more imposing than many of the other houses built in Salisbury during this period.

Following his death at the age of eighty in December 1952, ownership of the residence passed to his wife Minnie Schmutter. In 2004 the house remains in family ownership.

This building is of the bungalow style with a continuous verandah on three sides and a short ridge roof. The front elevation is symmetrical about the front steps which are centrally placed. Half-lattice timber doors open on to the verandah which consists of five bays. Verandah posts feature ornate, sinuous brackets, most likely Art Nouveau, with a line of infill between the brackets. The verandah balustrade features three rails. Slatted battens mask subfloor detail.

as a Federation Bungalow style house constructed during a period of significant growth in the suburb of Salisbury.

as one of few intact houses of this style remaining in Salisbury.