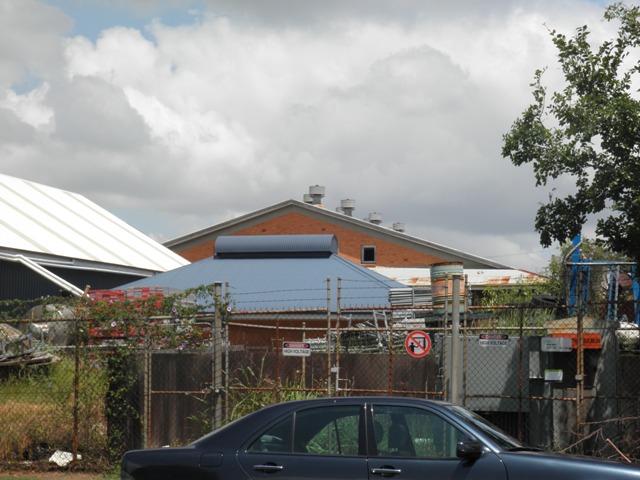 The former Magazine 8A is important as one of the Rocklea Munitions Works buildings, which was the only ammunition factory of its kind constructed in Queensland during World War II. At its peak, the Works employed up to 3,000 workers each day. A strong link has been made between the work undertaken in the munitions industry by workers, especially women, and postwar changes in employment. The former Magazine 8A is the only remaining cordite magazine within the former Works complex. Its design features the principal characteristics of a magazine constructed to house explosives.

This former Cordite Magazine (Building 8A) was constructed in 1941-42, one of approximately eighty buildings that comprised the Rocklea Munitions Works. Until the closure of the Works it was used to house cordite and percussion caps.

Cordite is the name given to a smokeless propellant used in the manufacture of munitions. Cordite Mark 1, first produced in Britain by Sir Frederick Abel in 1891,was composed of 58% nitroglycerine, 37% guncotton and 5% mineral (petroleum) jelly. The addition of nitrocellulose (gun cotton) to nitroglycerine allowed the oxygen-rich and relatively unstable liquid to be formed into a soft paste which could be forced through dies or perforations to form cords of explosive between 1 mm and 5 mm wide. The mineral jelly lessened erosion in the bore of the armament and improved storage stability.

Australia’s first cordite factory was constructed at Maribyrnong in Victoria in 1909. It supplied the nearby Colonial Ammunition Company, contributing to self-sufficiency in the manufacture of ammunition in Australia. With decentralised production, cordite had to be transported then stored in magazines specifically designed to accommodate this material.

Plans for three cordite magazines at Rocklea, Buildings 8A, 8B and 8C, were completed on 2 April 1941. The buildings were kept small to reduce the impact of accidental explosions. Because of the explosive nature of their contents, the magazines were considered a danger area and located apart from other buildings in the complex.

The magazines also were located at a distance from each other and surrounded by an earthen blast mound which would minimise damage in the event of an explosion.

Cleanways constructed of special concrete ran between the magazines and production areas. On these ran special electrically powered rubber-tyred transport vehicles. These prevented the accumulation of electrostatic charges and kept to a minimum the risk of sparks.

One important design feature of the magazine is its wide overhanging eaves and verandahs. These were to assist in the control of temperature and humidity. Such conditions were necessary as cordite, when kept in moderately high temperatures, over time shows signs of decomposition.

In August 1942 plans were completed for another three magazines, each to have housed 50 tons of explosives, as well as percussion caps. These magazines were not constructed, the explosives stored instead in an old coal mine at Ebbw Vale between Brisbane and Ipswich.

The magazine is a brick building with a timber framed hipped roof clad in corrugated iron. It features wide overhanging eaves.

as one of the buildings of the former Rocklea Munitions Works.

as a good example of a cordite magazine building utilised in World War II as part of the larger Rocklea Munitions Factory.

as a building within an industrial site that at its peak employed up to 3,000 workers each day.