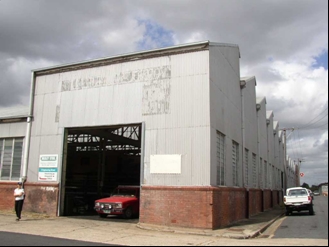 Although Queensland was strategically vulnerable during the Pacific phase of World War II, construction of a munitions facility (Rocklea Munitions Works) in Brisbane was undertaken to decentralise production and take advantage of an available workforce. This former Tools and Gauges Building (Building No. 28) was constructed in 1941-42. Machine tools such as milling machines, lathes and shapers were used to form, cut, grind, scrape and polish pieces of metal into shapes. These shapes or ‘parts’ could be used to build or repair other machine tools.

This former Tools and Gauges Building (Building No. 28) was constructed in 1941-42, one of approximately eighty buildings that comprised the Rocklea Munitions Works.

The Department of Munitions as created on 11 June 1940 at a meeting of Federal Executive Council. Munitions manufacture was split into eight main sections or directorates, one of which was the Machine Tools and Gauges Directorate. Frederick G Thorpe, a mechanical and electrical engineer and company director, was placed in charge.

The relationship between machine tools, precision gauges and munitions is an important one. Machine tools such as milling machines, lathes and shapers are used to form, cut, grind, scrape and polish pieces of metal into shapes. These shapes or ‘parts’ may be used to build or repair other machine tools.

Because the Australian Military forces needed ammunition designed to a precise calibre and weight, its mass production by unskilled workers depended on accurate process repetition. This required assessment using precision gauges. In mass production sets of gauges can be master sets, inspection sets or working sets, depending on their accuracy. While master sets require storage in controlled conditions, inspection sets are used to ascertain the accuracy of working sets which are then used in workshops for machine tool set ups.

Detailed and specific planning for the Rocklea Munitions Works commenced in Victoria in February 1941. The Administrative Office was transferred to Brisbane in July 1941. Throughout this period while buildings were being constructed, the process of ‘tooling up’ was also undertaken. Initially it was planned for two-thirds of the required tools and gauges to be obtained from the Railway Annexe at Ipswich and one third from the Rocklea factory’s tool room.1 Financial approval for an expenditure of £96,000 on the purchase of manufacturing tools and gauges was obtained.

Following interviews in February 1941 fourteen tool makers from Brisbane were sent to Melbourne. For the next six months these trainees worked at the Ammunition Factory in Footscray. In September 1941, under the instruction of WA Mappin, the assistant manager of the Rocklea Works, and engineer GA Pitcher, the trained tool makers temporarily installed their equipment in the Assembly Room within the SAA factory (32 Commerce Street, Salisbury) until the Tools and Gauges building was completed.

Plans for the Tools and Gauges building (No. 28) were completed in June 1941. Additional financial approval for expenditure of £98,500 on machinery and £5,400 on measuring equipment, including gauges, was obtained. When construction was completed the machine tools were transferred there. The manager of the section was GA Pitcher. In August 1943 when production was at its peak the Tools and Gauges section worked three shifts. The foremen at the time were VS Stanley (Senior Foreman), K Kane, JS Jenkinson and H Robertson.

It is not known what role the building served when the Munitions Works was converted to aero engine overhaul in 1944. From May 1946 Building 28 was leased, initially to Aircrafts Proprietary Limited, an aviation company which in the immediate postwar years sought other ways in which to employ the skilled metalwork staff it had trained during the Second World War. Aircrafts Proprietary Limited was one of the enterprises sponsored by the Secondary Industries Commission and at the time produced domestic refrigerators under the brand name ‘Airstream’. During this period the Queensland Manufactures Year Book for 1947 described Building 28 as an ‘excellent type factory construction’ building at Rocklea.

As part of the Rocklea Munitions Works complex, the former Tools and Gauges building is important in demonstrating the evolution of land usage from agricultural to industrial which occurred during the Second World War in the Rocklea/Salisbury area. As a steel frame workshop which features different roof heights, a brick office and brick with corrugated iron exterior, it exhibits uncommon and endangered aspects of local area’s cultural heritage. Specifically designed to accommodate machine tools, it is important in demonstrating the high degree of technological achievement involved in the manufacture of munitions during work during the Second World War.

The former tools and gauges building is an elongated structure which covers approximately 20,000 square feet (1,850 square metres). It is constructed in brick and galvanised iron and features fourteen saw-tooth-roof bays. The southern two bays, most likely the original office, are faced with brick. The remaining walls are brick to approximately head height, topped by galvanised corrugated iron. The internal framework and supports are steel.

Immediately north of the brick-walled office section are five bays supported by single steel posts, the remaining seven bays have a central row of doubled steel uprights. These appear to be additional support for the roof over the western side of these seven bays, set higher than the rest of the building.

The brick office section is relatively intact. The flooring throughout is predominantly hardwood timber. Flooring at the southern end of the building is in better condition than the north.

as a significant building within the Rocklea Munitions Works complex.

designed to accommodate machine tools specific to the process of munitions manufacture.