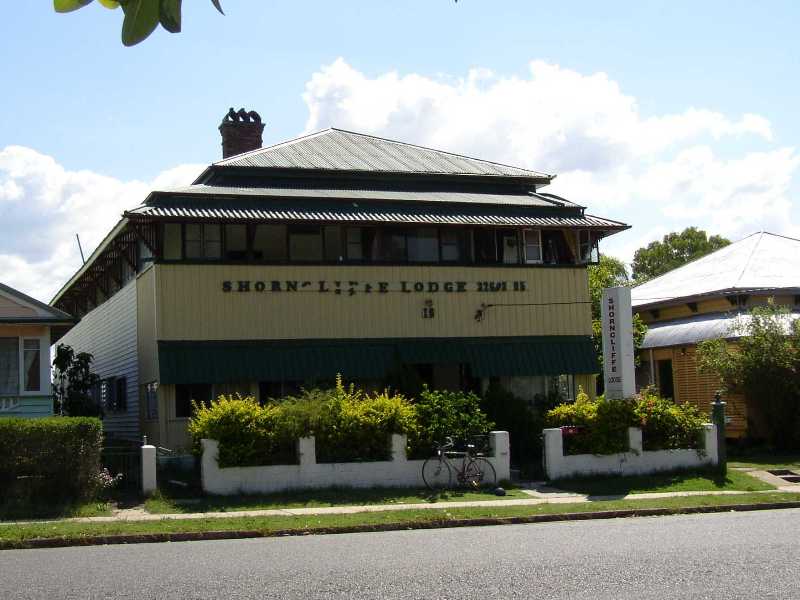 ‘Shorncliffe Lodge’ was built in 1881 for prominent Brisbane architect John Richard Hall and his third wife Charlotte as a family home. John designed the house himself and named it ‘Villa Marina’. After John’s death in 1883, Charlotte converted their home into a boarding house to take advantage of the increasing amount of tourism in the area. Along with panoramic views and proximity to the beach, facilities for guests included tennis courts, croquet lawns and horse stables. Charlotte sold the property in the late 1920s and it changed hands several times before being converted to flats and renamed ‘Shorncliffe Lodge’ in the early 1950s.

‘Shorncliffe Lodge’ was built in 1881 and was designed by prominent Brisbane architect, John Richard Hall as a family home for himself and his third wife, Charlotte in the popular seaside resort of Shorncliffe.

J.R. Hall was born in Chester-le-Flats at Durham, England in 1835, the son of Robert and Jane Hall. Following in his father’s footsteps, John Hall became an architect, first practising in Newcastle, England. He migrated to Australia, and in 1857, he married Philadelphia Starr in Sydney. They moved to Queensland where he was appointed a works foreman for the Colonial Architect’s Office on 23 December 1859. He only remained in this position until May 1860 when his overseer Charles Griffin claimed that Hall had“ no control whatever over workmen” and promptly sacked him.1

In 1864, Philadelphia Hall died and John Hall commenced a private practice in Brisbane, with offices in the “Brown’s Building”, Queen Street. He married Sarah Ann Milligan on 9 January 1865. In 1866, Hall came second in a competition to design a new engine house for the Citizen’s Volunteer Fire Brigade. The following year, Joseph Fowles beat Hall for the position of City Surveyor. From 1866-72, he was employed as the Brisbane North Ward’s assessor and it is thought that he also did some work at Maryborough around this time. He also supplemented his practice by engaging in property speculation in Brisbane Town and Spring Hill.

Hall oversaw the completion of the Brisbane Girls Grammar School that had been designed by Benjamin Blackhouse. In 1872, Hall was engaged as the Queensland National Bank’s architect and he was responsible for the design of many of their buildings throughout Queensland. He won the competition to design new government wharves and stores at Petrie Bight in 1873. In 1874-75, he designed a silk shed for William Coote’s Rocklea farm and subsequently gave evidence to the Parliamentary committee investigating the colony’s silk industry. Hall divorced his second wife in 1876.

On 28 February 1877, John Hall married for the third time. Charlotte Hall bore him a number of children including Thomas Ramsay Hall who also became an architect and later Sandgate Town Clerk. With a young wife and an expanding family, including a son from his first marriage, Hall bought land at Sandgate and designed a large family home. The move to this area led Hall to become involved in a number of local building projects. As well, Hall was active in the Manchester Unity of Oddfellows, having designed additions to their Fortitude Valley Hall in 1879. The year before, he had completed a Charlotte Street warehouse project for S. Hoffnung and Co. A dispute with this company over the warehouse’s roof, lead to a court case. It is thought that the stress of this legal action contributed to Hall’s death on 5 January 1883. He left behind a body of work that involved nearly 60 buildings, most of which were in Brisbane. Hall was buried at Bracken Ridge cemetery and his Hall and Son architectural practice was taken over by his eldest son Francis Richard Hall.

With a large family to support, his widow Charlotte decided to convert “Villa Marina” into a boarding house. The opening of the Sandgate rail line on 10 May 1882, meant that Charlotte Hall would be able to benefit from the increasing number of holiday makers who taking the train to the popular beachside township. Charlotte Hall had the telephone (phone No. 4) connected to “Villa Marina” and advertised its facilities and close location to the Sandgate Pier in the newspapers. The facilities provided to her guests included tennis courts, croquet lawns, a garage and horse stables and fine cuisine. Charlotte Hall acquired the adjoining residences, “Bellair” and “Capri” and these buildings were used as annexes to her accommodation centre. “Capri” was later renamed “Monaro” and it was used as “Villa Marina’s” dining room. Apparently the property was very popular with people who were holidaying from Western and Central Queensland, with Queensland Country Life describing Mrs Hall as the “genial hostess” of “Villa Marina” which was “situated in the best part of Sandgate” with “unsurpassed view of the bay islands and Pacific Ocean”.1

“Villa Marina” remained in operation as a first-class boarding house when Miss O. Harper and Mrs. G. Ebenstoh ran it in the late 1920s. In 1946, the owner, Mrs. E. Mullins, added a garage and storeroom to the site. She added a fire escape and a bathroom to the building in 1949. With the demise of Sandgate’s popularity as a holiday destination during the 1950s, the demand for the type of accommodation offered at “Villa Marina” diminished. In 1953, the owner of the property, M. Anderson received Brisbane City Council permission to convert “Villa Marina” into tenements (flats). After this time, the property changed its name to “Shorncliffe Lodge”.

This property has been identified as having heritage significance in both a local heritage trail and in the 1995 Sandgate Character and Heritage Study that was conducted by the Brisbane City Council.

as a former residence that operated as a boarding house from the 1880s to the 1950s when Sandgate was a major Queensland tourist destination.

as a home designed by, and built for, prominent Brisbane architect John Richard Hall.