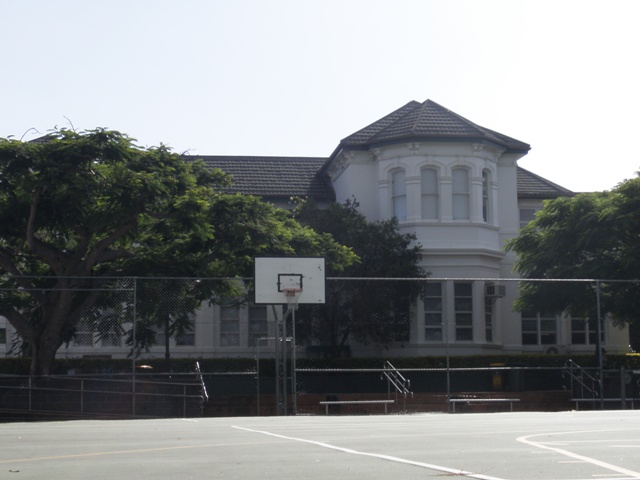 The house at the heart of St Patrick’s College was first established for John McConnel in 1864. The residence was altered and extended by notable architects FDG Stanley and GHM Addison in 1886 and 1891 for D.L. Brown and became the favourite seaside resort of Brisbane’s social elite in the late nineteenth century. As Sandgate enjoyed its heyday in the early twentieth century Morven was operated as a guesthouse. Since 1951 it has been central to St Patrick’s College but its gothic grandeur remains testament to an earlier incarnation as the seaside home of the well-to-do.

Properties in what is now Shorncliffe were among the first and second parcels of land sold in Sandgate. The first survey was undertaken by J. C. Burnett in 1852 and the area, bounded by Friday Street, Signal Row and the shoreline was first offered for sale on 9 November 1853. Over 30 acres was sold, mainly in two rood allotments. Native Police were stationed in the area from 1850 until 1862 as the local Aboriginal population continued to resist the occupation of their land by white settlers.

Despite this, further land sales were held in 1854 and 1858. By the following year the Belvidere Hotel and three other small mansions were the extent of building in Sandgate Village, as the area had come to be known. The bridging of Cabbage Tree Creek in 1861 helped to establish the area. Much of the land was bought by speculators, but as more Brisbane citizens began to travel to the area, more substantial buildings began to be erected.

On 1 June 1854 David Cannon McConnel of Cressbrook was granted title to allotments 9, 10 & 11 of section 4. His brother John McConnel of Durundur station, having been appointed to the Legislative Council purchased adjoining lots 8 and 13 in 1862 and had Benjamin Backhouse design a single storey timber residence. Construction is reputed to have incorporated timber from the McConnel property at Esk and hand-made bricks made on site. By 1864 McConnel was a resident of the village of Sandgate when he purchased more land to add to his holding. In the 1870s further accommodation was built for the growing visiting population. McConnel’s home was joined by another large seaside residence Saltwood constructed nearby, and the Seaview Hotel was built in Pier Avenue (then called Kate Street) as well as the boarding house Holland House.

By the late 1870s the Aboriginal presence was erased and a number of land holdings were subdivided into building allotments of 12 to 28 perches. Further occupation and development of the area contributed to and followed the proclamation of Sandgate as a self administering town in 1880. The area around Pier Avenue and Yundah Streets became the communal and civic centre of the town of Sandgate. The first Town Hall (1886), Court House and first and second police stations were located there. Religious and educational facilities were also located nearby. The area grew in popularity as a 'watering place' for Brisbane and Ipswich residents, both for day trips and for holidays at local cottages, particularly with the completion of the rail link to Sandgate terminating near Curlew Street in 1882. The completion of the rail line also gave impetus to the increasing permanent local population. The belief in the beneficial effects of the sea air contributed to Sandgate's popularity and many people came to stay to take the airs. The Lady Musgrave Sanatorium (1884) cared for recuperating children whilst hotels and boarding houses were also used for this purpose as well as providing holiday accommodation for country families. More land was subdivided and offered for sale as residential sites. A number of larger homes, boarding houses and hotels were built, such as Blue Waters (1881), Villa Marina (1881) and the Musgrave Hotel (1887). A number of existing buildings, such as the Seaview Hotel (1882) were extended.

Existing houses also underwent extensive alterations and additions. In 1879 Moses Ward of Brisbane and chairman of the Redcliffe and Sandgate Steam Ferry Company purchased John McConnel’s property. An entrepreneur and land speculator, Ward sold the property to businessman David Laughlin Brown in 1880. A number of Brown’s children were born at the property which he called “Morven” after his homeland in Scotland. Under Brown’s ownership the house became a hub of social activity. In 1886 Brown engaged renowned colonial architect F.D.G. Stanley to design alterations and additions which are believed to have converted the single storey dwelling to two storeys. In 1891 Walter Taylor and Oakden, Addison and Kemp successfully tendered for further alterations to the house. These works resulted in the fine, imposing residence photographed in 1904.

During the late nineteenth and early twentieth centuries “Morven” was the venue for seaside interludes for many of Brisbane’s social elite including Queensland Governor H. W. Norman. On 15 November 1905 the Brisbane Courier ‘Social’ columns reported that Mr & Mrs Banks and family, Miss Banks, Mr & Mrs Doek and two children, Mr & Mrs Ellerslie, Mrs & Miss Shewcroft, Mrs Lindsey, Mr Lindsey, Mr Kenyon and child, Mrs Dath and child, Miss Stone, Messrs Morgan, Cranston, and Wright and others” were staying at Morven.  Evidently the alterations included extensions that allowed Morven’s numerous visitors to “take rooms” and stay for extended periods. The house and grounds were also used for fundraising events for the Presbyterian Federal Assembly, the Methodist Church and numerous other worthy causes including Patriotic and Repatriation Funds and Queen’s Carnivals.

In December 1910 Edward Goddard Blume bought the property. During Blume’s ownership the property continued to be used as a guesthouse. In 1921 Morven was advertised under ‘Board and Residence, Health Resorts and Invalid Rooms’ as offering “good accommodation in large rooms for visitors and permanents with a tennis court and garage.  Tel. Mrs Craven 3.” (BC 8/9/1921) As the twentieth century progressed, numerous oyster saloons, cafes and refreshment rooms dotted the area. Three bus companies provided services to and from Brisbane as well as locally.

The town of Sandgate became administered by the Brisbane City Council in 1925. The area continued to develop with stores and businesses catering to the growing resident population and holiday crowds. Early films were shown on open air screens attached to the kiosk in Moora Park and the Pier Open Air Theatre. Later films were screened in the Town Hall and Deckers Hall in Pier Avenue (then Kate Street). However, while Shorncliffe continued to be a popular destination, the Sandgate and Brighton foreshores also drew crowds of holidaymakers. The building of the Hornibrook Highway in 1935 brought mixed blessings to the area as it brought more passing trade but also allowed visitors to travel further north.

Blume’s mother-in-law, Mrs Craven and her daughters ran the property as a popular guest house and resort. Edward Blume retained ownership until his death on 3 November 1943 whereupon title was transmitted to his family, the Craven Blumes, with power of sale in October 1949.

Gradually Shorncliffe declined as a civic and community centre as services developed in the more central area of Sandgate which was more accessible for residents of Deagon and Brighton. However, Pier Avenue continued as a thriving local shopping centre from the late 1920s until the 1960s. This is likely to have been assisted by the purchase and redevelopment of the Morven property by the Corporation of the Trustees of the Roman Catholic Archdiocese of Brisbane in 1951. That year the Council approved the establishment of a school and alterations and additions to the Boys College on the site.

St Patrick’s College commenced on 29 January 1952 with an enrolment of 172 students. Throughout the 1950s further alterations were approved as well as permission granted to erect an additional building in the site in 1955. The building at 68 Park Pde was registered as a tenement for 18 persons until 1970 when permission was granted to erect a school. Since 1968 the Trustees of the Christian Brothers have owned the site. Since that time the school has continually expanded and upgraded its facilities to accommodate its growing community of students.

as Morven had its origins in a residence built in 1864 but altered and extended in the late nineteenth and mid-twentieth centuries. The history of the grand residence now at the core of a college complex reflects the history of the development of the local area.

as the core of a school established by the Catholic Church it has educated and influenced the lives of students and their families for over half a century.

as the core building of a boarding school established at the seaside by the Catholic Church which has had an important role in the local area's and Brisbane's history. 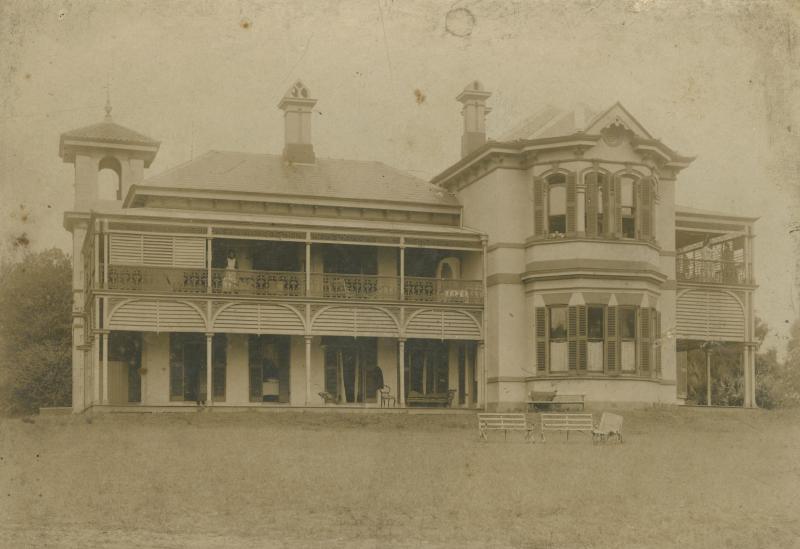