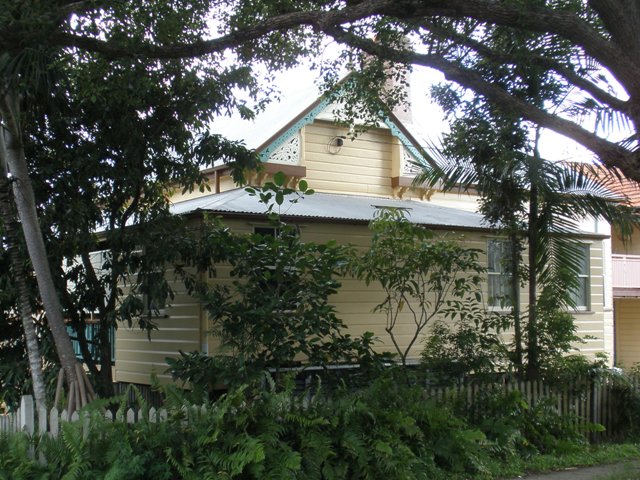 Ardovie was built for bootmaker and alderman David Pringle Milne. Milne established the Glasgow Boot and Shoe Mart in Queen Street in 1860s and served as the local member for Brisbane’s west ward. He commissioned eminent architectural firm John Hall and Sons to design this residence in what was then the fashionable seaside suburb of Shorncliffe. The house was finished by 1887 and Milne retired the following year. He divided his time between his Petrie Terrace residence ‘Warriston’ and this house until his death in 1897. Ensuing owners gave the property its name. In the 1930s the house was used for numerous social and charitable functions. It was converted to a tenement dwelling in the 1950s but has since reverted to a single unit dwelling.

This area encompasses the first and second land sales in Sandgate. The first survey was undertaken by JC Burnett in 1852 and the area, bounded by Friday Street, Signal Row and the shoreline was offered for sale on 9 November 1853. Over thirty acres were sold, mainly in two rood allotments. Thomas Dowse and his sons were the first white occupants. Despite a number of confrontations between the Dowse family, white travellers and the local Aboriginal people, further land sales were held in 1854 and 1858. By the following year the Belvidere Hotel and three other small mansions were the extent of building in Sandgate village, as the area had come to be known. The bridging of Cabbage Tre Creek in 1861 helped to establish the area. Much of the land was bought by speculators, but as more Brisbane citizens began to travel to the area, more substantial buildings began to be erected, such as the Sandgate (1858), Osborne (1862) and Seaview (c1870s) Hotels, ‘Morven’ (1866) and ‘Saltwood’ (1870s) and the boarding house ‘Holland House’ (1876). John Baxter established an oyster saloon in 1862 catering for travellers. However substantial numbers of militant local Aboriginal people meant that the road from Nundah to Sandgate was picketed with troopers and horsemen and occupants of vehicles were not allowed to pass unless the locality was cleared before dark.

The Aboriginal presence was erased by the late 1870s and a number of land holdings were subdivided into building allotments of 12 to 28 perches. Further occupation and development of the area contributed to and followed the proclamation of Sandgate as a self-administering town in 1880. The area grew in popularity as a ‘watering place’ for Brisbane and Ipswich residents, both for day trips and for holidays at local cottages, particularly with the completion of the rail link to Sandgate terminating near Curlew Street in 1882. The line was extended and what later became known as Shorncliffe station opened on 1 May 1897. During the 1880s more land was subdivided and offered for sale as residential sites. A number of larger homes were built, such as ‘Blue Waters’ (1881), and some existing ones, such as ‘Morven’ underwent extensive alterations and additions. New boarding houses such as ‘Villa Marina’ (1881) were built; the ‘Seaview Hotel’ was extended and the ‘Musgrave Hotel’ was also built.

The belief in the beneficial effects of sea air contributed to Sandgate’s popularity and many people came to stay to take the airs. The Lady Musgrave sanatorium (1884) cared for recuperating children whilst hotels and boarding houses were also used for this purpose as well as providing holiday accommodation for country families.

From the 1880s the area around Pier Avenue and Yundah Streets became the communal and civic centre of the town of Sandgate, which is now Shorncliffe. The first Town Hall (1886), Court House and first and second police stations were located there. Religious and educational facilities were also located nearby.

The peak of Sandgate-Shorncliffe’s popularity dates from this time, with numerous attractions catering for visitors being developed from the 1880s until the late 1930s and 1940s. The Sandgate Pier, first proposed as a commercial wharf, was built and extended in 1882-3. Bathing areas were attached

David Pringle Milne purchased the 27 perch site in August 1873. Milne was a boot maker and importer. From 1870-76 he was also Alderman for Brisbane’s west ward. He lived in Petrie Terrace and around 1884 commissioned a large semi-detached dwelling called ‘Warriston’. (Warriston is still extant and listed in the Queensland Heritage Register [600276].)

Warriston was completed around 1886 and Milne moved in with his family. He then engaged architectural firm John Hall and Sons to design a building for his Shorncliffe site.

In 1888, Milne announced his retirement from the Glasgow Boot and Shoe Mart, thanking his ‘numerous Customers for past favours’. He lived primarily in Warriston, but served on the bench of the Sandgate Police Court from 1890, suggesting that he also used his marine residence.

Milne died in 1897 and his property was offered for sale. The house had gained additional appeal with the opening of the Shorncliffe railway station, not far from the house. David and Margaret Burns bought Ardovie in 1898, offering it for rent through the late 1890s and early 1900s.

as an 1880s seafront home built while Sandgate/Shorncliffe was the favoured seaside recreation area of Brisbane.