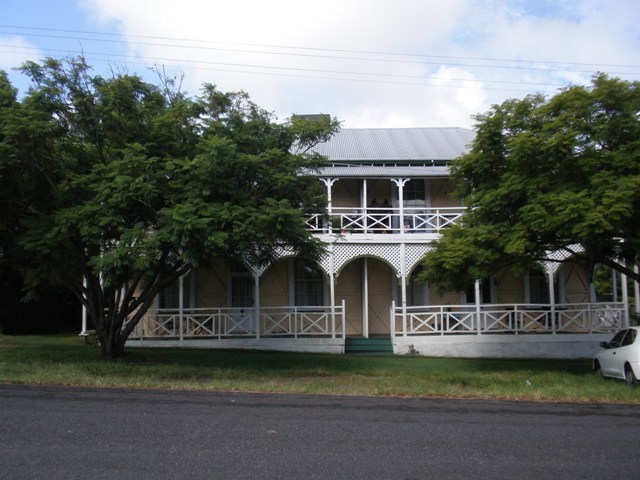 Holland House reflects the appeal of Shorncliffe as a seaside resort for Brisbane residents in the nineteenth century. Built circa 1889 as a hotel, it was intended to cater to vacationers brought to Sandgate and Shorncliffe by the new railway line. It was refused licensing, however, and its proprietor was declared insolvent. From the early twentieth century it operated as a boarding house, known initially as ‘Dorset House’. The large timber residence was a popular holiday and honeymoon destination in the twentieth century before it was converted to flats.

Shorncliffe, known as Cabbage Tree Creek for the nearby waterway, was one of the earliest occupied areas of the Moreton Bay foreshores. The land was subdivided and sold from the 1850s, though poor relations with local Aboriginal groups meant that settlement was slow. A small community developed in the 1860s, and day-trippers were brought to Shorncliffe by coach after the creek was bridged (when ‘the heat and dust of Brisbane will again drive her citizens to inhale the fresh air here, and to invigorate their enervated frames by a dip in the cooling waters of our beautiful bay’.1 Hotels sprang up alongside private homes, to cater for the holiday visitors.

This block of land was granted to William John Loudon in September 1856. Loudon, or Louden, had operated the Lamb Inn, one of the oldest hotels in Fortitude Valley, and a hotel on the road to Sandgate. He opened a hotel in Sandgate but did not develop this site. Although large, the site did not have views to the sea, and was not particularly close to transport.

This situation changed by 1882, however. Yundah Street became a popular area for boarding houses, while the rest of Shorncliffe began to develop rapidly, leaving few areas vacant. ‘This land is in reality the only large block left in Sandgate for subdividing purposes,’ wrote sales advertisements, which claim, though exaggerated, was borne out somewhat by the increasing number of houses, shops, hotels and holiday homes built in and around the area. Loudon’s site, since purchased and sold by Arthur Wettendal, was transferred vacant to Jacob Dickinson in 1882.

Dickinson was a Fortitude Valley second-hand dealer, who appears to have purchased this site as a speculative investment property. He also had another property in Sandgate, ‘Bella Vista’, in which he resided in 1889, and evidently also hosted boarders there.

In January 1889 Dickinson applied for a licence for his Yundah Street property. He had prepared plans, which he presented to the Sandgate Board, and estimated the cost of the new property at £5,000. In April 1889, a new application was made for the property in the name of RF Daniel.

(Dickinson attempted to turn his property into a hotel in the late 1880s. He applied for a hotel licence but his application was refused on the grounds of a hotel being ‘unneeded’. Although Dickenson had claimed that he had turned away paying guests for lack of room, Sandgate already featured accommodation. The 1885 post office directory listed five hotels and eight boarding-houses, including two temperance houses for teetotallers. Other proprietors, like Patrick Murphy, had also had applications refused but constructed large residences

In spite of this response Dickinson had completed construction of the property by 1890, when he was declared insolvent.)

Holland House, built in 1876, was a popular guest house for honeymooners. The house and a tennis court stood on grounds of one and a half acres within two minutes’ walk of the beach and three minutes from the railway station. Mrs English, the proprietress, offered visitors ‘every attention and all home comforts’ as well as ‘milk and poultry from our own yards’. It was not only the promise of fresh seaside air and home cooking that attracted American servicemen to 92 Yundah Street during the second world war. At that stage Holland House operated as a brothel. Early boarding house

as it demonstrates the development of Shorncliffe as a holiday destination for Brisbane residents.

as a two-storey, nineteenth century set of timber flats.