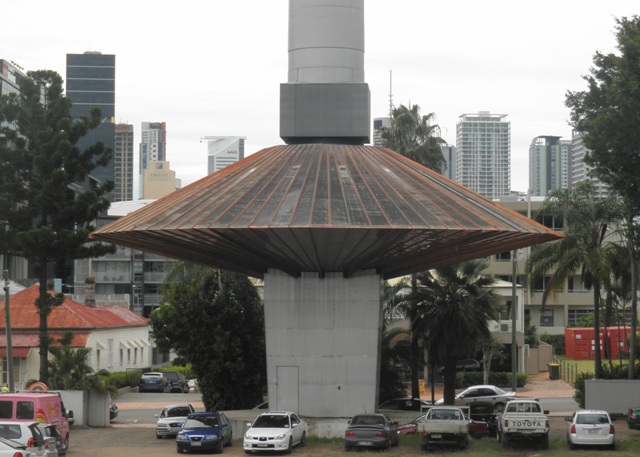 The Skyneedle is one of the surviving sculptures that were commissioned specifically for Expo ‘88 in Brisbane. At that time it was considered to be the largest single art commission in Australia. This particular sculpture, by its very size, became an identifiable symbol of Expo ‘88. It also remembered for its integral part in the Expo fireworks spectacular, where the Skyneedle dominated the night sky over Brisbane. As Expo ‘88 is considered to be a landmark event in the development of Brisbane as a modern city, this sculpture remains an important reminder of that event.

This tower was one of the sculptures that were erected for World Expo ’88, which was held in Brisbane from 30 April to 30 October 1988. The sculptures throughout the $34,000,000 Expo site were designed so as to “form a vital link between nature and technology – the two faces of World Expo ‘88.

World Expositions began in 1851 with the “Great Exhibition of the Works of Industry of All Nations”, later known as the Crystal Palace Exposition, that was held in London. Then in 1931, the Bureau International Des Expositions (BIE) was formed in Paris as the regulatory body for world expositions. The Queensland Government began planning a bid for a world exposition in 1980 and after being awarded the 1988 Expo with a theme of “Leisure in the Age of Technology”, by the BIE, planning began on a suitable site.

A largely run down area of South Brisbane between Grey Street and the Brisbane River was selected for redevelopment as the Expo ’88 site. When Expo ’88 opened on 30 April 1988, a crowd of 90,000 people were in attendance. By the end of the first week, attendance figures had risen to 500,000 people per day. Expo ’88 was hailed as a significant event in Brisbane’s history for it finally dispelled Brisbane’s image as a sleepy provincial city.

The ‘Skyneedle’ was sculptured from steel and copper, erected to the height of a 20-storey building and topped by a revolving searchlight. This searchlight had a candlepower that was eight times brighter than the standard searchlight of World War Two. This gave Skyneedle’s searchlight a radius of 200 kilometres. ‘Skyneedle’ cost $1,500,000 to design, construct and erect and at the time of Expo ’88, it was considered to be the largest art commission in Australia.

‘Skyneedle’ was utilised for more than its aesthetic value as a sculpture. The laser searchlight on top of the tower would pierce the night sky of Brisbane, making it one of the most prominent landmarks of the Expo ’88 site. As well, the searchlight was used to create special lighting effects for the fireworks spectaculars that closed the evening program every night at Expo.

After the closure of Expo ‘88, all of the sculptures were put up for public sale. ‘Skyneedle’ was purchased by prominent Brisbane businessman and hairdresser Steve Ackerie who moved it from Southbank to his ‘Stefan’ corporate headquarters at 16 Edmondstone Street, thereby maintaining the Skyneedle’s link to South Brisbane.

This is an uncharacteristic example of a tower designed exclusively as a landmark sculpture for South Brisbane. Its needle-like silhouette rises high above its surrounding low-lying buildings, making it a prominent feature of Brisbane’s south side to be observed from kilometres around. Topped by a roving searchlight, the steel and copper tower once radiated a light beam around the city of Brisbane at night. Near its base, two wide, connected, ribbed, copper cones meet and through each of their centres, a tall, shiny aluminium cylinder rises. Part way up is a thin copper band followed by another wider copper band up higher again. A cone shape with the top half removed sits above a protruding curved band of aluminium with a series of bands reflecting the colours of the rainbow above it. This colour scheme was not part of the original sculpture but was added to it after the Skyneedle was purchased by Stefan Hair Fashions. A half copper and half aluminium sphere resides above the thin coloured bands, with a long thin metal piece extending further towards the sky.

as a sculpture commissioned specifically for Expo '88 which was a momentous event in Brisbane's history.

as a reminder of Brisbane's historic Expo '88 that was an important event for the wider Brisbane community.