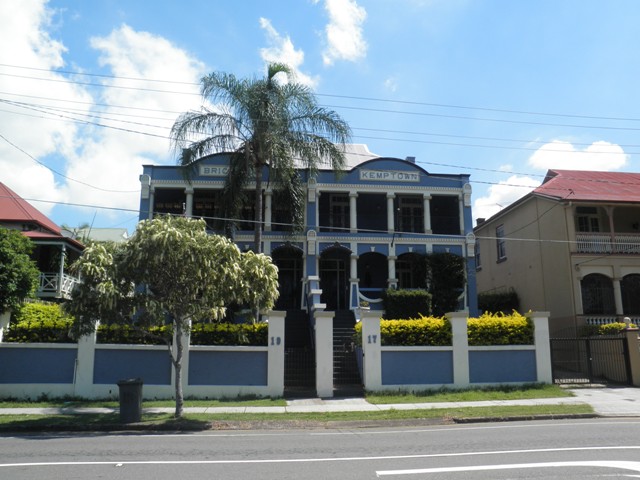 This dwelling is an unusual example of high quality duplex housing and was one of two built in 1882 as a rental investment for the wealthy entrepreneur, George Booth. The two buildings at 15 and 19 Edmondstone Street were among the earliest constructed in this vicinity, which in the 1880s was considered to be a highly desirable address for the upper middle class. This duplex was constructed of high quality materials in a terraced design that represents a rare and uncommon aspect of Brisbane’s cultural heritage and makes an aesthetically significant contribution to the streetscape of Edmondstone Street.

In Brisbane, detached housing was always far more common than attached or semi-detached housing, even in the nineteenth century, primarily because the Undue Subdivision of Land Act 1885 prohibited the sale of terraced and duplex houses as separate dwellings forcing owners to use them as rental dwellings.

George Booth acquired the land on which they were built in August 1881, under the Provisions of the Victoria Bridge Lands Sales Act 1879. The two blocks purchased by him – Lots 3 and 4 of Section 47 - measured one rood and 32 perches and cost £315. Construction of the duplex began almost immediately after the land was purchased and by 1883 post office directories indicate that both were occupied.

For several years a string of short-term tenants occupied this building. Post office directories indicate that the occupants were mainly professional people and skilled artisans. Then in 1891, Booth finally moved into one half of 15 Edmondstone Street, making that the first year of owner occupancy since its construction. On his death in 1920 the whole of the land was sold to Thomas Edmonds, builder. Post office directories indicate that Edmonds lived in 19 Edmondstone Street before selling the property on to Maud Piper and Alice Greene in 1927.

The history of this duplex is closely associated with that of the adjacent dwelling as the pattern of ownership is closely correlated. This duplex exemplifies the fate of most of the grander homes in South Brisbane. From the 1920s, the expectations of housing in this area began to change.

The increasing value of inner-city properties encouraged subdivisions and the conversion of houses into flats during the 1920s. Consequently this dwelling, as with others in the area, followed a pattern of first accommodating comfortable, middle class residents followed by a period of low cost rental accommodation from the 1940s to 1980s. Presently, there is a renewed interest in restoring the homes to their original grandeur and this is evident in the condition of 19 Edmondstone Street.

This two-storey duplex is built symmetrically around a central party wall. It has been greatly modified from its original with alterations to the verandah and a new roof. The entry to the tenancies is at the bottom level and on either side of the party wall, via identical entry gates and a concrete stair. The verandahs on each side of the party wall are enclosed with cast-iron screens and balustrades. The columns are rendered in a fashion that expresses solid masonry columns at the locations of the original verandah posts. The columns have a rusticated base at the lower level with concave sections dropping between them and a horizontal member as the balustrade rail.  The lower level verandah bays have arched heads above the steel gates within the two entry bays. At the upper level a broad arch appears on the parapet centred over each tenancy. Below this arch the building has its two names rendered in raised lettering, ‘Kemptown’ and ‘Brighton’. The main gambrel roof has had its sheeting material replaced but the original chimneys remain at each end of the building.

as one of the earliest inner-city duplexes constructed in this area of Brisbane and as an example of a dwelling built in the boom years of the 1880s.

as an inner-city duplex used for rental accommodation and owner occupancy during much of its existence.

as a duplex built in the early 1880s that provided accommodation for artisans and professionals.