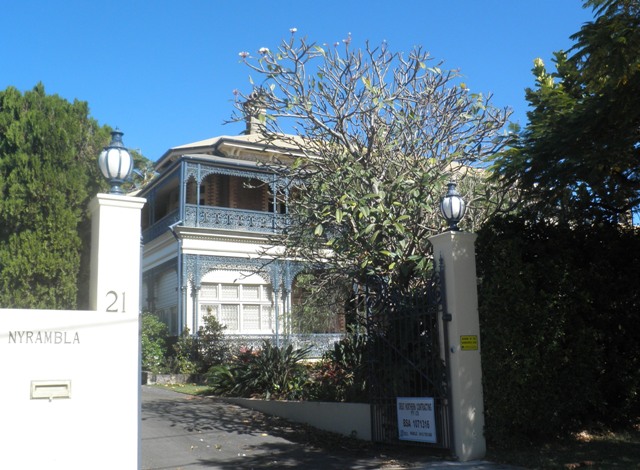 This large, ornate mansion, designed by James Cowlishaw, was built for the Australian Joint Stock Bank in 1885-86 as the residence of their General Manager, Henry P. Abbott. It is significant for the evidence it provides of the pattern of development of Ascot during the late nineteenth century when Brisbane’s wealthiest residents built mansions on large estates in the area. The house was converted to flats in the late 1920s and was occupied by the Central Bureau during World War II who worked on breaking Japanese codes. The house has since been converted back into a private residence.

Nyrambla was built by the Australian Joint Stock Bank in 1885-86 as the residence of its manager, Henry P. Abbott. The house was designed by Brisbane architect, James Cowlishaw. Once one of the grand homes of Ascot, it was converted to flats in the 1920s and its large estate been progressively reduced by subdivision.

Nyrambla is situated on land which was part of some 40 acres sold by Deed of Grant to Frances Edward Roberts in 1856. After further sales and subdivision, around 14 acres were purchased by the Corporation of the Australian Joint Stock Bank in 1885. It was usual for banks to provide residences for their managers, a practice which continued well into the 20th century. Sometimes the bank and residence were incorporated into the same building, for example the A.J.S. banks at Rockhampton (1862-63, James Cowlishaw), Mackay (1879, F.D.G. Stanley, supervised by A. Josling) and Killarney (1890; designed by F.D.G. Stanley and recently removed to the western suburbs of Brisbane). Prominent Brisbane architect, James Cowlishaw was commissioned to design a residence on the Ascot site for Henry Abbott.

James Cowlishaw trained as an architect in Sydney before arriving in Brisbane in 1860. He soon established himself as one of the town’s most successful private architects and was also a land speculator, newspaper director and Conservative MLC in the Queensland parliament. Cowlishaw designed many bank buildings throughout Queensland in addition to many residences, churches and business premises in Brisbane and elsewhere. His obituary described his architectural legacy as “banks and business premises and the better-class residences”1.

Postal records show that H.P. Abbott was living in Brisbane by 1868. Prior to the 1880s, his earlier addresses are given as Brunswick St (1874) and “Hazlewood”, South Brisbane (1876). A 1932 article in the Queenslander by F.E. Lord noted that the Abbotts were members of the New South Wales squattocracy and that Nyrambla  was named after a station owned by the family of his wife. After retiring from his position at the Australian Joint Stock Bank in the late 1890s, Abbott and his family moved to Sydney where he died in 1903. Abott Street, which dates from at least the 1890s and Henry Street, which appeared some time after the estate of Nyrambla was subdivided in 1905, recall the presence of the family in the area.

In the 1890s, Nyrambla was one of the three large estates which took up much of the land between Windermere Road and Lancaster Road. The other two estates were Windermere and Mayfields. While the 1880s residence of Windermere, once the home of the Appel family, has survived to the present, Mayfield, was destroyed by fire in the 1990s.

By 1900, Nyrambla was being rented from the Australian Joint Stock Bank Ltd. by  Patrick Perkins, an Irish brewer and Member of the Legislative Assembly of Queensland. Subsequent tenants included Mr T. Herbert Brown and his wife, a daughter of Sir Samuel Griffith.

From 1905, the entire property of Nyrambla was subdivided by the Bank and sold as allotments ranging in size from 16 perches to over 80 perches. An estate map for the sale advertised the land as “Nyrambla Estate, Ascot ….for many years the residence of the late H.P. Abbott …….93 super excellent building blocks and superb residence”.

In 1912, Nyrambla and over 1 acre of the surrounding grounds were purchased by Edward David Miles, of Charters Towers. After his death in 1922, the property was sold to G.W. Whatmore of Centennial Hall Ltd, later Willoughby Trust Ltd. After Whatmore’s death in the late 1920s, Nyrambla was converted to flats by his family and the amount of land around the house was further reduced by subdivision to its present size of around 80 perches. The Brisbane architectural firm of Hall and Prentice was commissioned to oversee the conversion, accepting the tender of builders Cunningham and Jones in July 1929.

Lord gives a lengthy description of the brick, slate roofed house and its grounds, which at that time included two large garages and a two-storied wing at the rear of the house containing maids’ rooms, breakfast room and a kitchen. The house featured several fireplaces, 6 bedrooms, a cedar staircase and verandahs on three sides with ornamental ironwork. A two-storey, brick stable building at the back of the house had been replaced by a new house at the time Lord was writing.

During World War II, the house played an important role in the Allied war effort as it was occupied by the Central Bureau, a group of Allied service personnel who worked on breaking Japanese codes. A plaque on the house was donated by a group of Americans who returned to Nyrambla in 1988 for a wartime reunion and reads:

Central Bureau, an organisation comprising service personnel of Australia, USA, Britain, Canada and New Zealand, both men and women, functioned in this house from 1942 till 1945. From intercepted enemy radio messages, the organisation provided intelligence which made a decisive contribution to the Allied victory in the Pacific.

A second plaque recognises the contribution of “the service given by the men and women of the Royal Australian Corps of Signals at this site during World War II…..They passed this way”.

Title deeds indicate that the property has remained in the possession of descendants of the Whatmore family. It has recently been converted from flats back into a private residence.

The residence is an example of a two storey Late Victorian Mansion.  It has a hipped corrugated iron roof and a street-facing gable to the left side of the house. Iron cresting and finials top the ridges. A decorative apron is applied to the underside of the gutter of the main roof.

The house has a verandah on each storey. The top floor verandah wraps around the house with a metal curved roof separate from the main roof of the house in a fashion typical of 19th century dwellings. Timber posts and top rails with cast iron balusters are located at both verandah levels.  Vertical timber valances decorate the upper part of the lower verandah.  French doors open onto verandahs at both levels.  Tall vertical arched windows are located along the right sidewall.

The house has an elongated rectangular plan, with a U-shaped wing extended to the back. The two-storied wing originally contained the maids’ rooms, kitchen, and breakfast-room.

The main part of the house is shaped according to the style favoured in the 1880’s and 90’s. This design incorporated a long room divided by folding doors on one side of a hall extending through the building, and two rooms on the other side. Upstairs there were six bedrooms and a sitting-room. Several fire-places were situated in the house these composed of tiled hearths and marble mantelpieces.

as it demonstrates the pattern of development in the Ascot/Hamilton area in the late nineteenth century of large estates built by some of Brisbane's most influential families, and for the role that it played in the Allied war effort in Brisbane during World War II as a site for code breaking.

as a fine example of a Victorian mansion built in Brisbane during the late nineteenth century.

as an ornate and imposing 1880s Victorian mansion.

as a mansion built for the Australian Joint Stock Bank, which was a major bank in Brisbane (and Queensland), and as a fine example of an 1880s residence designed by James Cowlishaw, a prominent nineteenth century Brisbane architect. 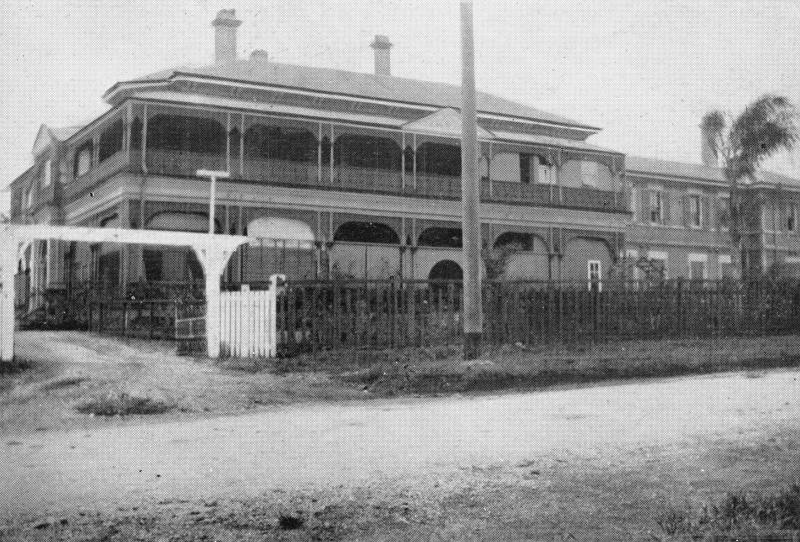 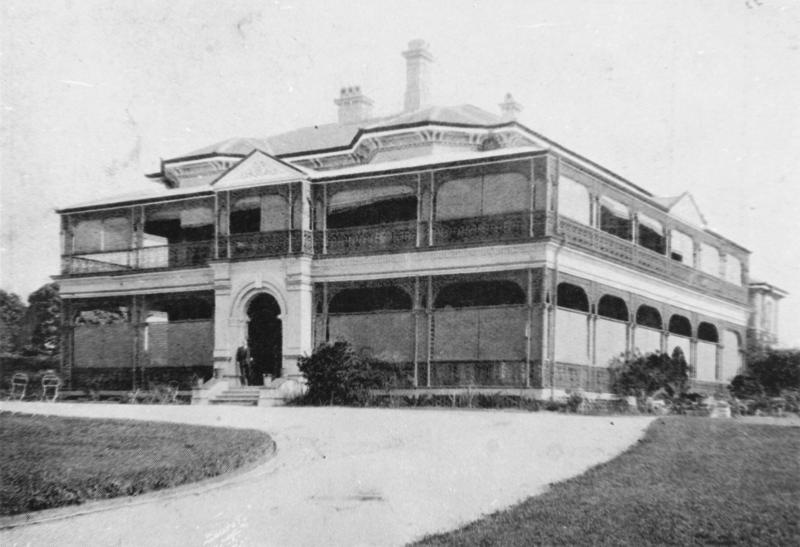 When Nyrambla in Ascot was converted into flats, tenders were invited by Hall & Prentice Architects and Builders. Cunningham & Jones were the successful firm. More information is available from: Architecture and Building Journal of Queensland, 10 July 1929, p. 66. (Description supplied with photograph)