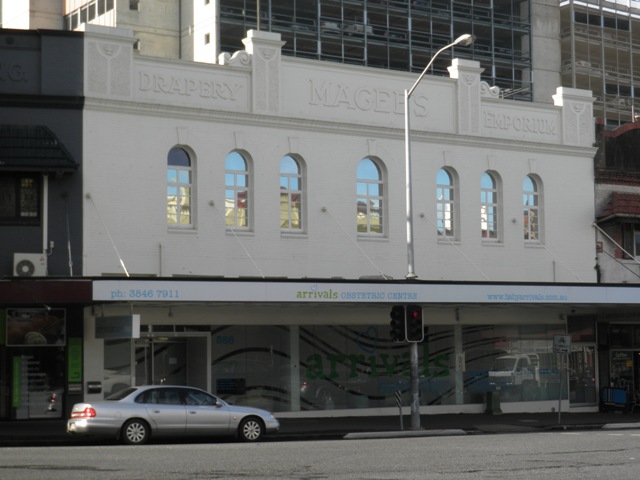 Built in 1928 for Magee & Co, this building was one of a small number of new commercial premises constructed during the 1920s to revitalize the Woolloongabba shopping precinct. This construction complemented a South Brisbane Municipal Council program of new roadworks. Opened as Magee’s Drapery Emporium, it had a prominent site, opposite the busy Annerley Road intersection and serviced by two tram routes. It reflects the shopping experience available to Brisbane suburbanites prior to the advent of shopping centres in 1969. By 2000, it was the well-known Ford’s Music Store.

Stanley Street (or Stanley Quay as it was first known) was identified on Brisbane's first Town Plan in 1842.  By the 1860's the street had been subdivided and gradually small shops and wooden hotels were constructed. The 1880s was a growth period for South Brisbane as Queensland experienced an economic boom. Thus Stanley Street developed into a major thoroughfare and retail centre, second only to Queen Street.

The construction of the South Brisbane graving dock in 1881 and the 1884 opening of the Woolloongabba Railway Station (on the northeastern corner of Stanley and Merton Road) brought suburban and country customers to Stanley Street.  Commercial development flourished and Stanley Street became lined with the premises of grocers, ironmongers and bootmakers.  Recognising the commercial potential of Stanley Street, prominent retailers such as Allan & Stark and J. & T. Heaslop established businesses there.  The fire station and post and telegraph office were erected near the intersection of Stanley and Vulture Streets, making this region the civic centre of South Brisbane.  Stanley Street became inadequate for the increasing volume of traffic and in 1883 the street, between Vulture Street and Annerley Road was widened. Stanley Street, between Annerley Road and Merton Road, was widened by the Woolloongabba Divisional Board in 1886.

By 1918 the condition of Stanley Street had deteriorated to the extent that the South Brisbane Council spent £2,000 remaking and metalling the street.  Anxious to stimulate commerce, in 1920 this Council implemented a programme of reconstruction, allocating £56,000 to build permanent roadways in Stanley and Melbourne Streets.  In 1927, the land on the northern or riverside of Stanley Street, from Annerley Road to Merton Road, was resumed and the existing shops were demolished.  This section of Stanley Street was doubled in width and the tram tracks were re-aligned.   New commercial premises were constructed at the completion of this work.

With the exception of those buildings mentioned earlier, the majority of buildings that comprise the Stanley Street streetscape are from this era or later. The typical late twenties, early thirties commercial architecture of this streetscape is best indicated by the former Magee's Drapery Emporium.

The business partnership of Murray and Magee, drapers, was operating on this site circa1905, apparently from rented premises. The buildings on this site were demolished following the road resumption that happened in Stanley Street in 1927. The property was purchased by the Malouf family in September 1927 and sold to members of the Magee family in February 1928. In May 1928, Magee & Co applied to erect a brick shop on this site. The builder was M. Dwyer of Hendra and the architect was A. Wilson, presumably Alex B Wilson of the architect firm Alex B. and R. Martin Wilson. This may have been one of Wilson’s last designs, as he retired during 1928. Magee’s Drapery Emporium was erected shortly after and remained in family ownership until January 1945.

As with most regional commercial centres, the development trends in Stanley Street, reflect the statewide economic fluctuations.  The last economic boom along Stanley Street had occurred in the 1920s and little growth took place after that decade. Postwar, the ‘Magee’s Drapery Emporium’ building was occupied by Ford’s Music.  From the 1990s, it has contained an adult entertainment venue.

The front of the building is of two-storey brick construction and is mostly intact above parapet level. The upper level has seven symmetrically arranged arched window openings. The central window is slightly wider than the others, which are grouped in threes to both sides. A decorative keystone, within the brick arch tops each arch opening. Above the windows and at the base of the parapet, a moulding runs as a band across the front of the building. The parapet is also symmetrical in arrangement and incorporates the building signage in raised lettering.

The central portion is higher that the two side sections and contains the word ‘MAGEE’S’,  with the words ‘Drapery’ and  ‘Emporium’ split to either side in the lower sections. These areas are separated by vertical elements, which have embossed urns in their upper region. Patterned rustication highlights these elements of the parapet. Ornamental scrolls sit to either side of the central raised section. Below the awning line the building is not especially intact with the addition of modern glass shop fronts, which have recently been coated in opaque paint. The majority of the building has been coated in this same paint finish. An awning is attached to the facade with metal rods offering further structural support. It provides shading for the footpath and entry level.

The building makes an important contribution to the streetscape of Stanley Street at Clarence Corner, opposite the junction with Annerley Road. The building’s form and materials are part of the pattern within the street, relating to the commercial usage.

being part of the 1927 major re-development of Stanley Street.

that is interwar commercial premises in the South Brisbane area.

as a well composed, finely detailed commercial premises with the original business name emblazoned on the parapet and designed by architect A.B. Wilson.

for its association with the drapery firm of Magee's that serviced the local community for almost four decades.