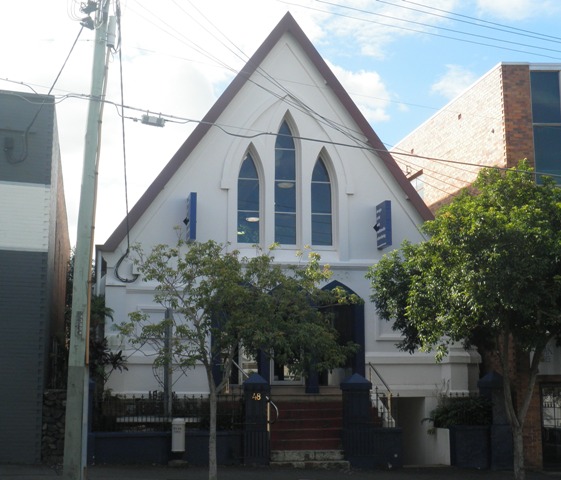 The former Leichhardt Street Primitive Methodist Church was constructed in Spring Hill in 1873-74. Spring Hill was one of the first suburbs laid-out in Brisbane after the Moreton Bay Penal Settlement closed and the area opened to free settlers. This modest church building was established to met the rising spiritual needs of the local community and is is the oldest surviving church in Spring Hill.

The Moreton Bay Penal Settlement closed in 1842 and Brisbane was opened to free settlers. Free settlement lead to an expansion of Brisbane’s boundaries with Spring Hill developing as one of Brisbane’s first suburbs as it filled with housing estates. German scientist and explorer Ludwig Leichhardt had led three expeditions from Brisbane during 1842-48. His 1848 expedition, comprising seven men, disappeared mysteriously in 1848 gaining him lasting fame. The track that followed one of Spring Hill’s ridgelines was named Leichhardt Street to honour the dead explorer.

The land containing 48 Leichhardt Street was part of a larger Suburban portion Number 208 (1 acre, 1 rood, 28 perches) that was first sold to George Byrne on 16 February 1857. In 1863, part of Lot 208 was sold to James Hope. On 6 January 1873, Joseph Buckle purchased subdivision 5 of Lot 208. This was a small block of 10 perches fronting Leichhardt Street. On 22 July of that same year, Buckle transferred ownership of the block to a group of trustees comprising himself and Thomas Harding, William Henry Paton, George Bedgood, John Batten and Charles Adsett.

The 1874 edition of the Queensland Post Office Directories that was surveyed and compiled in 1873 listed Joseph Buckle as a Minister of the Primitive Methodist Church residing in Bartley Street, Spring Hill. This was within a short walking distance from the Leichhardt Street church site. Buckle had been appointed the Minister of the Brisbane’s second Primitive Methodist Church in Adelaide Street, Brisbane in the early 1860s. The first church was in Fortitude Valley.

The men mortgaged the land through the Queensland Insurance Company for ₤400 on 24 October 1873. The money is presumed to have been used to fund the building of the Primitive Methodist Church building on the land. Prominent Brisbane architect Richard Gailey designed the brick and porphyry stone church and construction commenced in 1873. It was completed in 1874 with walls almost 30 centimetres thick. A separate, small public toilet (or water closet) was located at the rear of the site. The Leichhardt Street Church was one of six Primitive Methodist churches constructed in Brisbane by 1874, with the churches at West End, Indooroopilly and The Gap constructed around the same period as the Leichhardt Street church.

The Methodist Church disposed of the site on 30 March 1978.  It had been placed on sale as early as February 1977, with an asking price of $40,000. Included in the sale were 12 solid timber church pews. In 1979, the Brisbane City Council approved alterations to the interior of the former church building so that it could be reutilised as commercial office space (intially for the advertising agency Market Force Pty Ltd) and then leased to a variety of businesses. In recent years, the former church building has been used as a tax agent’s office, a restaurant & coffee shop and as architects’ offices.

Of the six churches built throughout Spring Hill by 1900, only three remain. St. Paul’s Cathedral (built 1889) is a major ecclesiastical building meant as the second Anglican cathedral within the centre of Brisbane, while the City Tabernacle (built 1890) was built as the headquarters of the Baptist Church in Queensland.  The only other church in Spring Hill is a twentieth century design, that is, the Brisbane Spiritual Church built in 1929. The smaller former Primitive Methodist Church is representative of the early spiritual development of the Spring Hill community when available resources allowed for churches of a modest scale.

built to service the Primitive Methodist free settlers in one of Brisbane's first suburbs.

as the earliest surviving nineteenth century church in Spring Hill.

operating for over a hundred years as Spring Hill’s Methodist Church.