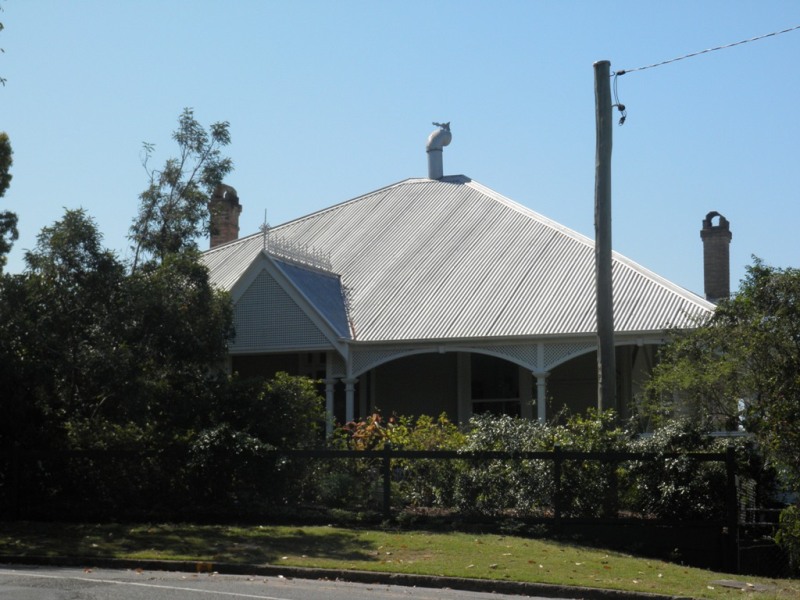 This high-set Bungalow style house was constructed between 1900 and 1904 for either F.C. Simmonds or, more likely, agricultural chemist Johannes Brunnich. Brunnich, who named the house ‘Daheim’ had purchased the land from Simmonds in 1903. Born in Austria-Hungary, he migrated to Queensland with his family in the late nineteenth century and after briefly working in the sugar industry was appointed Government Agricultural Chemist for the Queensland Department of Agriculture and was greatly respected in his field. After Johannes died in 1933, his wife Kate continued to live in the house for some time. The Brunnich family eventually sold the house in 1966.

At the time, Pethebridge was Secretary to the Marine Board, based in Edward Street in Brisbane. Pethebridge lived in Paddington. It is probable that he sold the land as a consequence of moving to Melbourne, with the transfer of the Marine Board functions to the Department of Defence, after Federation. He sold the land to agricultural chemist Johannes Christian Brunnich in 1903.

At this stage it is uncertain whether the present residence was built for Brunnich or for F.C.Simonds. The Post Office Directories (PODs) indicate an FC Simmonds could have living at this residence or at John Simmonds’ house. Despite the uncertainty of the exact origins of the house, it was certainly constructed by 1904, when the given land owner, Brunnich, is listed as living there.

Brunnich was born in Austria-Hungary, and studied chemistry at the Zurich Federal Polytechnic School. After migrating to Queensland, Brunnich initially worked in the sugar industry, but was soon appointed as Government Agricultural Chemist in the new Queensland Department of Agriculture. Brunnich also lectured at the new Queensland Agricultural College, Gatton. Brunnich is recognising as having had immense skill as a chemist and was reputedly held in great esteem by his colleagues.

When this appointment terminated, he moved to Brisbane, in 1902. He bought this land in July 1903, and presumably began to build immediately. Brunnich named the house ‘Daheim’.

Brunnich  died in 1933, but his widow Kate remained in the house for some time, at least until the 1940s. Although owned by a trustee company after Brunnich’s death, it seems likely that Kate remained there until the sale of the house in 1966, probably following her death. If so, the same family had occupied the house for over sixty years.

This building is a high-set house with encircling verandahs and large pyramidal corrugated iron roof with two chimneys. It is a Bungalow class of dwelling, having a continuous roofline, rather than separate verandah roofs.  External walls are single-skin T&G vertical boarding with exposed framing and diagonal bracing.

The house is situated on a large block of land high on a ridgeline of Taringa, with views to the north and east.

as evidence of the residential development of Taringa in the early twentieth century.