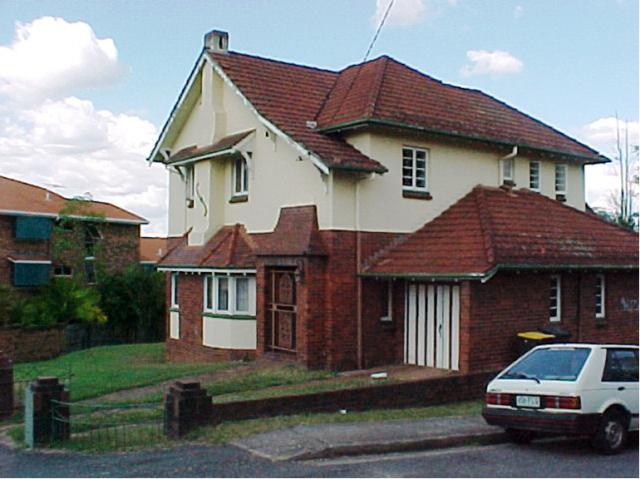 Constructed around 1938, this substantial Old English style brick dwelling is a good example of the Interwar residential development of the Taringa area. The house has significant aesthetic value.

The land for this particular house was made available by a small subdivision that occurred during the early to mid-1930s. The land belonged to Lottie Morrow, wife of Henry Morrow. The Morrow family were associated with the notable firm Messrs Morrows Ltd, biscuit and confectionary manufacturers.

The size of the allotment associated with the Morrow land stood at over 3 roods and 17 perches, on various title deeds. However in c1934, following on from a similar pattern throughout the Interwar period of reducing the size of larger residential properties for economic or practical considerations, the land was subdivided and offered for sale.

In April 1938 Joseph Hunter Mckenzie purchased 23 perches of land. In June 1938 an application was submitted to Brisbane City Council for approval to construct a brick dwelling at Taringa. The builder was given as B. Hollingsworth of Brisbane Street, Bulimba and the cost of the dwelling is disclosed as 1,950/-/-. This was a considerable sum for the period as generally applications for dwellings ranged in price between 500/- /- to 1000/-/-.

Taringa, along with Toowong and Milton had traditionally been one of Brisbane's "villa" suburbs, where wealthier members of society chose to build luxurious houses still within convenient distance to the City. Through the first half of the twentieth century these suburbs gradually filled with more modest houses, sometimes on the subdivided estates of the grander homes. Still in a premium suburb, however, this newer housing could often be of the more expensive variety. 20 Morrow Street is a good example of this pattern of development in Taringa. It was an expensive home at the time; architect designed and built in the Old English style.

Current evidence indicates that the architect for the residence could have been James Musgrave Collin. This dwelling would have been one of his last before he entered into partnership with A.M. Job. The architecture firm A.H Job and J.M Collin appears to have commenced in July of 1938 and lasted until 1954. While each partner appears to have done individual buildings after the formation of the partnership the firm, prior to June 1940 the firm was involved in a number of light commercial and residential projects, indicating they were quite successful in the early stages of their partnership.

This excellent example of an Interwar Old English (c1915 -c.1940) style residence sits in a prominent hillside position, on this busy street, facing north west. The large scale of the
house in combination with the contrasting colours and finishes gives the house a striking appearance, providing a landmark in this section of Taringa. Brisbane City Council Heritage Citation.

The house displays many features typical of the Interwar Old English style; a mediumpitch gabled roof, clad in terra-cotta tiles, with timbered, bracketed eaves. The walls are bedded into the site with a brick base in contrasting colour to the pebbledash stucco finish of the upper storey. Further detailing includes a prominent chimney to the front of the house, and bracketed window hoods. The large decorative bay window, wrought iron balustrade on the first floor ‘Juliet’ balcony and castle-like entrance portico all add to the picturesque qualities of this building.

The tiled roof underwent repair and restoration work in 2004.

as it is an existing example of interwar development in Taringa.

as it is a large and prominently located example of the Interwar Old English style, executed in brick and Marseilles pattern terracotta tile with contrasting render and exhibiting the particular detailing associated with the style.