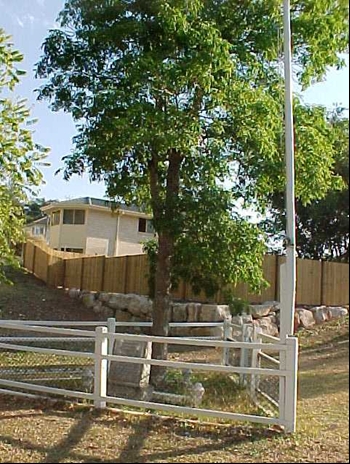 This modest war memorial situated on a grassy area of road reserve was dedicated to the memory of Andrew Clarke, believed to have been the only soldier from the locality to lose his life in World War I. It has social and spiritual significance to the local community of Tarragindi.

The exact date of the creation of this memorial has been difficult to pinpoint. It was erected to honour the memory of Andrew Clark, thought to be the only resident of the Tarragindi area, then known as Sandy Creek, killed in World War I.  Available evidence suggests the memorial was constructed after 1925.

In 1912, Andrew Clarke’s father, Andrew Senior, purchased three acres of land to the east of Fernvale Road between Bramston and Pope Streets. At this time Andrew Avenue did not yet exist. Soon after purchasing this land, Andrew Clarke Snr mortgaged it to the Worker’ Dwellings Board for 280. Under this Queensland Government scheme, residents could afford to buy their own home, choosing from a variety of housing styles.

According to a local history of the area, the Clarkes lived in a tent on their land for eighteen months prior to the construction of their house. The house, originally situated closer to the corner of Bramston Street and Andrew Avenue, was later moved to its current location at 105 Andrew Avenue. Postal directories first list Andrew Clarke as a resident of Sandy Creek in the 1913-14 records. The Clarke’s son, Andrew, was killed in France on 18 March 1918. It is not known if Andrew lived in his parents’ house.

After their son’s death, the Clarkes sold over an acre of their land (an area now bounded by Bramston Street, Andrew Avenue and Pope Street, and including the site of their home)  in 1918 to Charles Knight. The Clarke’s house has recently been raised and substantially altered by its current owners. The remainder of the Clarke’s land was sold in 1923.

In September 1925, although the amalgamation of the various local authorities into the Greater Brisbane Council had officially taken place, Stephens Shire Council applied to the Department of Public Lands to dedicate part of Andrew Avenue and Fernvale Road “as a Memorial Park”. The letter, dated 24 September 1925, stated that “[a] request for the Park has been made by the residents of Sandy Creek, in which area the proposed Park is situated, and this Council has agreed to their request, subject to your permission being obtained”. Presumably, permission was granted for the memorial to be erected, although the small triangle of land on which it is situated has remained as part of the road reserve and is not officially classified as a park.

The memorial to Andrew Clarke was one of thousands of memorials erected across Australia after World War I commemorating the 60 000 servicemen who died. Many, like the stone plaque at Tarragindi and others in Brisbane, for example at Hamilton, were dedicated to local residents who had been killed or wounded during the War. This memorial is, however, unusual in that it commemorates only one soldier.

In September 1925, after several years of petitioning by the local residents and the Progress Association, Andrew Avenue was officially opened by Councillor J. Soden. He named the new road, which provided access to a residential area, Andrew Avenue in honour of Andrew Clarke for his “supreme sacrifice in the Great War”. An article in the Telegraph at the time reported that Andrew Clarke’s parents were unable to attend the opening but wrote a letter of thanks to the Council. It is not known how long after the opening of Andrew Avenue the memorial plaque was laid. However, according to local historian, Mr George Dean, a crow’s ash tree was planted at the memorial in 1925. The current tree appears to be a more recent planting.

The Andrew Clarke memorial consists of a marble  plaque on a stone tablet with the following inscription:

This stone was erected and tree planted in memory of 2605 A, Private Andrew Clarke, 9th Battalion, A.I.F. killed in action in France, 18th March 1918, aged 26 years. “Greater love hath no man than this – that a man lay down his life for his friends”.

According to George Dean, the memorial was paid for by the Sandy Creek Progress Association. An adjacent area of land beside the Avenue, donated by the Grimes, Allsop, Cage, Knight, Clarke and Shanks families, was also dedicated to the memory of Private Clarke. The Sandy Creek Progress Association later constructed a hall near the junction of Fernvale Road and Andrew Avenue in 1932. In 1966, due to lack of use and a debt of 850, the hall was given to the Tarragindi – Wellers Hill Sub Branch of the RSL. It was renamed “Memorial Hall” in commemoration of its ties to local residents, particularly those who had built the hall.

The Andrew Clarke memorial is significant for the part it plays in documenting the area’s participation in World War I, a watershed in the lives of many Australian families. It is also significant as evidence of the gratitude of the Sandy Creek/Tarragindi community for the sacrifices made by one local family, also commemorated by the naming of Andrew Avenue.

The Andrew Clarke Memorial consists of a marble plaque on a stone tablet inscribed with the details of the local soldier’s service and death in World War I. Adjacent to the memorial is a small tree and a flagpole. The memorial is enclosed by a small white timber fence and located on a triangular grassy area at the junction of Andrew Avenue and Fernvale Road.

as an example of a modest World War I memorial constructed by the local Sandy Creek (now Tarragindi) community.

for the evidence it provides of the desire of the local community to commemorate the sacrifice made by a local family during World War I.

for its special association with the family of Andrew Clarke, who lived nearby in the 1910s and for whom Andrew Avenue was named.