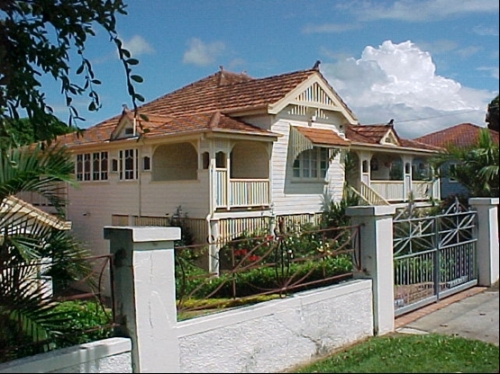 ‘Onival’ was built c1919 for motor mechanic Joseph Edyvean-Walker his wife Jeanne and their children. It is named after a French river in the Somme district that was made famous by the battles of the First World War. At that time, ran through the the Sandy Creek area was largely undeveloped and rugged, bush terrain surrounded the house. This Interwar, multi-gabled residence was built during the very early stages of gradual transformation of the fringe, bushland district of Sandy Creek into the residential area, Tarragindi.

This property was originally part of a larger, 55 acre section of bushland that was first sold for freehold purposes in 1862. As was the case with many of Brisbane’s early districts, this area was named after the nearest freshwater source – Sandy Creek. The creek ran down from Toohey Mountain then north through the Sandy Creek (Tarragindi) area until it joined Ekbin Creek near the modern site of Sexton Street. On 4 December 1862, property developer Robert Davidson, a resident of Brisbane Town, paid £49.10 for the undeveloped Sandy Creek block that was described as Portion 112 in the Parish of Yeerongpilly.

For resale purposes, Davidson subdivided Portion 112. In August 1864, he sold subdivisions 92 to 101, a total of 8 acres and 17.15 perches to Hugh Stowell and Allan Ravenscroft Wetherhall, also residents of Brisbane Town. From 1864 to 1886, a number of small mortgage loans were secured against this property. The amounts reflected the Sandy Creek district’s status as an undeveloped area of steep hills and brush-covered hollows located on Brisbane’s fringe. Sandy Creek was difficult to reach as Brisbane’s horse-drawn tram network along Logan Road only extended as far as Buranda. In March 1887, John O’Rourke and Thomas Ahern gained joint ownership of subdivisions 92 to 101. In October 1890, they dissolved their partnership and split the land between them. Ahern took 4 acres and 36.8 perches that included the current site 55 Tarragindi Road.

Ahern’s 1890 title deed shows no road markings either running across or around the boundaries of his land. By 1895, a government road adjoining Ahern’s land had acquired the name of Tarragindi Road. This road and, subsequently the modern suburb took their name from a Loyalty Islands man, Tarragindi Tasserone, who had been kidnapped by ‘blackbirders’ in the 1890s and brought to Queensland to work on a plantation. After his escape, he was found wandering along Ipswich Road by the Foote family who looked after him. He undertook land clearing work and while working for the Grimes family who were building a new house at Sandy Creek, he suggested ‘Tarragindi’ as the name for the new house. As “Tarragindi” reportedly meant ‘camp on the hill’, the Grimes adopted the suggestion. Tarragindi was soon used to name the government road that serviced the Grime’s homestead. However, the district remained known as Sandy Creek.

In August 1899, Ahern sold the land to Donald McKinnon, a mercantile clerk living in Brisbane. McKinnon hoped to make a profit from further subdividing the land into smaller blocks and then conducting a land sale. He was encouraged by the recent development of small scale farming in Sandy Creek that had resulted from the construction of the Yeerongpilly rail line in 1885. McKinnon mortgaged the land for just £30 through the City and Suburban Permanent Building and Investment Society, Brisbane in May 1901. He resubdivided the land and held a land sale. Perhaps, due to Sandy Creek’s isolation, the land sales were slow, as the first block was not bought until April 1914. The construction of the first public building, a congregational church, in the area, was a sign that the local population was starting to grow. But World War I (1914-18) further slowed the land sales. In February 1916, William J. Cook purchased a 1 rood and 31.9 perch block of land that included the future site of 55 Tarragindi Road.

On 22 May 1917, Jeanne Edyvean-Walker, the wife of motor mechanic Geoffrey Edyvean-Walker bought part (33.5 perches) of Cook’s land. At the time of purchase, the Walkers were living in South Brisbane. On 30 July 1917, they obtained a mortgage loan from the Queensland Government Savings Bank in order to build a new home at Sandy Creek. They had a standard, Brisbane outer suburban block that faced Tarragindi Road. The block contained large gum trees, some of which had to be cleared to make way for the new house. The house contained 4 rooms, a hall and a front verandah. Their new home had been completed by 1919, as they are registered for the first time at this address in the 1919 Queensland Electoral Roll. Joseph Edyvean-Walker is not listed as receiving mail at his Tarragindi Road residence until the 1925-26 edition of the Queensland Post Office Directories. At that time, Tarragindi Road, and therefore the Edyvean-Walker’s new home was an Annerley street address.  They added to their surrounding property holdings. In 1918, Joseph had bought a neighbouring 34 perch block (adjacent to 45 Tarragindi Rd.) and then a neighbouring 34.5 corner block in 1922. Thus by June 1922, they had acquired a large property totalling 2 roods and 22 perches that fronted both Tarragindi Road and Cavan Street.

Other developments saw Sandy Creek change from an isolated, fringe area to a recognised, outer Brisbane suburb. The Sandy Creek Progress Association had been formed circa 1919, soon after the Great War. In September 1925, after years of petitioning by the Progress Association, Andrew Avenue was officially opened by Councillor J. Soden. He named this road, which provided access to an expanding residential area, Andrew Avenue in honour of Andrew Clarke, who was thought to be Sandy Creek’s only World War I fatality. A memorial plaque and crow’s ash tree were placed at the end of Andrew Avenue. The Progress Association later constructed a community hall near the junction of Fernvale Road and Andrew Avenue in 1932. The opening of Tarragindi Hill Water Reservoir in August 1923 had placed the area on Brisbane’s water grid. A Brisbane City Council bus route was extended to Tarragindi Hill in the 1920s. By 1928, a semi-permanent encampment of old aged pensioners had been established in the bushland surrounding the Reservoir. Tarragindi was formally adopted as the new name for the area/suburb in 1931.

The house at 55 Tarragindi Road is an example of this early urban development in Tarragindi. The Edyvean-Walker home at 55 Tarragindi Road was given the name ‘Onival’. It was named after a seaside resort in the Somme District of France, where Geoffrey and Jeanne (Deléon) had spent some time during their courtship. The birth of their third child Ian in 1925, led to Geoffrey and Jeanne enlarging ‘Onival’. A third bedroom, two side verandahs, a new, enclosed  back landing and a new kitchen were added. While not a grand residence, it benefitted from its bushland setting. Tarragindi was generally viewed favourably as being a rural retreat. The area was described at the time as:

“ …a little known resort…in a secluded woody glade surrounded by pretty hills, picturesquely adorned with bush…it has the advantage over most rural resorts in that it is near the metropolis, being within easy walking distance from the Ipswich Road tramline at Cracknell Road.”1

However, the bushland setting of ‘Onival’ would also bring tragedy to the Edyvean-Walker family. On Thursday 14 December 1933, Jeanne Edyvean-Walker asked her eight-year old son Ian to go into the nearby bush to collect firewood for the kitchen stove. When the boy had not returned by midday, Jeanne notified the police and a search was organised. The searchers were hindered by the terrain surrounding ‘Onival’. It was reported that:

“In many places the scrub is so dense that it would be possible for the searchers to pass within a few feet of the boy without seeing him.”2

The next day an Aboriginal police tracker was called in but it was too late. Ian was found drowned in Sandy Creek by the police tracker on Friday 15 December 1933.

Geoffrey Edyvean-Walker had died of cancer on 8 July 1929. Geoffrey’s two blocks of land that he had purchased in 1918 and 1922 had been transferred into Jeanne’s name on 5 July 1929. After Ian’s tragic death, Jeanne continued to live at 55 Tarragindi Road, with her daughter Jeannette and her older son Raymond, who was a labourer. During the 1930s, an upstairs bathroom and enclosed study was placed on one side verandah, while the other side verandah was also enclosed and furnished. The main bedroom was converted into a billiards room.

The extension of the Ipswich and Logan Road tramlines during the late 1930’s encouraged further residential development and the clearing of Tarragindi’s bushland. By 1946, that part of Tarragindi Road situated across from ‘Onival’ was lined with houses, though the block containing the Edyvean-Walker home contained just two residences, ‘Onival’ and a house sited at the Percy Street corner. The 1946 aerial photograph reveals that the Edyvean-Walker family had laid a large, impressive, terraced garden on the large, adjoining block located at the corner of Tarragindi Road, across from the intersection of Laura and Kenneth Streets. A croquet lawn and tennis courts had also been built beside the house, with the tennis courts gone by 1946.

But the completion of the urbanisation of Tarragindi occurred in the 1950s during the post-World War II housing boom. In 1951, the elderly Jeanne Edyvean-Walker began further subdivided her large property. She sold a 25.11 perch house block (that became 49 Tarragindi Rd) to Arnold Hilbert and the remaining land including, her home to Onni W. Lindstrom, both on 17 March 1954. On that settlement date, Lindstrom immediately disposed of a 30 perch house block to Lillian M. Anderson. This was the corner site that had included the terraced garden that became 59 Tarragindi Road.

This house is a good example of a multi-gabled, Interwar style of residence that marks the transformation of the semi-rural district of Sandy Creek into an urbanised Tarragindi. It was altered and extended during the late 1920s and 1930s to meet the changing needs of the Edyvean-Walker family.

The residence is asymmetrical in design, with a broken-back tiled-roof with terracotta finials at all apexes and a street facing decorated gable with a decorative geometric motif of timber slats over the projecting front section of the house. The verandah roof has a hipped shape at the front corners.

Two small gabled pediments, one above the verandah roof to the front of the house and the other over the later enclosed verandah to the side, are both visible form the street.

Paired slender, square timber posts, with elegant timber brackets and slats infill in between, gracefully support the verandah roof. The verandah has a two-rail timber balustrading. The relatively narrow entrance steps are adjacent and to the right of the projecting gabled section of the house.

The house is raised on stumps with timber battening forming arches between the stumps. The exterior walls are clad with horizontal timber boards.

A skillion-tiled sunhood, with cut to shape timber slats to its sides, protects the wide timber window at the projecting gabled front of the house.

Casement windows now enclose what was originally the verandah to the side of the house.

The masonry fence with metal infill and gate appear to be of more recent construction.

as an early example of the residences built at Sandy Creek during the Interwar period, which was the first stage of the area’s change from bush land fringe to the residential suburb of Tarragindi.