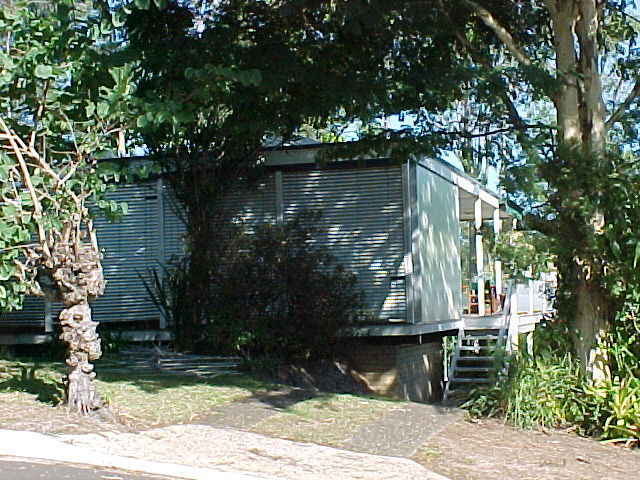 This innovative plywood house was designed by architect Peter Heathwood in the late 1950s. It embodies a departure from the traditional Queenslander in its building materials and form and displays the sensitivity to climate and landscape that was promulgated in this period. It won the 1958 Plywood House Competition and was displayed at the Brisbane Exhibition from 1958 until 1963 before being moved to this site at The Gap.

In the 1950s and 1960s in Queensland the wartime austerity, restrictions and shortages slowly gave way to affluence and a sense of optimism. Architects, influenced by modern international styles benefited from the postwar conditions as immigration and a baby boom contributed to the rapidly developing urban sprawl in Brisbane. Much of this development consisted of ‘fibro’ and timber bungalows as the traditional verandahed Queenslander fell victim to shortages of building materials and a perception of being ‘old fashioned’. Architects, adopting international and interstate trends, developed a new awareness of the importance of taking account of climate and landscape in the design of new buildings. Queensland architects, like Heathwood, John Dalton and Theo Thynne and Associates, were searching for “an architecture with an identifiable Queensland flavour” and incorporated “traditional devices, such as roof ventilation, screening and verandahs … but did not … imitate the forms of the traditional house."1

Peter Heathwood, then a newly registered architect, designed this ‘Plywood House’ in 1958 for the Plywood House Competition. With working drawings prepared by fellow architect John Dalton, the design won the competition. The house was constructed and displayed at the Brisbane Exhibition for a number of years and in 1963 was moved to this site in the bushland suburb of The Gap.

The practice of Heathwood and Dalton was formed in 1957. According to Hampson “It was an energetic practice that produced many innovative designs that received Australia wide recognition.”1 They designed a number of award-winning homes, including the (now demolished) Speare Residence at Indooroopilly. Peter Heathwood went on to establish his own practice and his work influenced a number of student architects in the ‘sixties and ‘seventies.

as an innovative, award-winning plywood house that was displayed at the Brisbane Exhibition from 1958-1963.

as an award-winning house designed by architects Peter Heathwood and John Dalton. 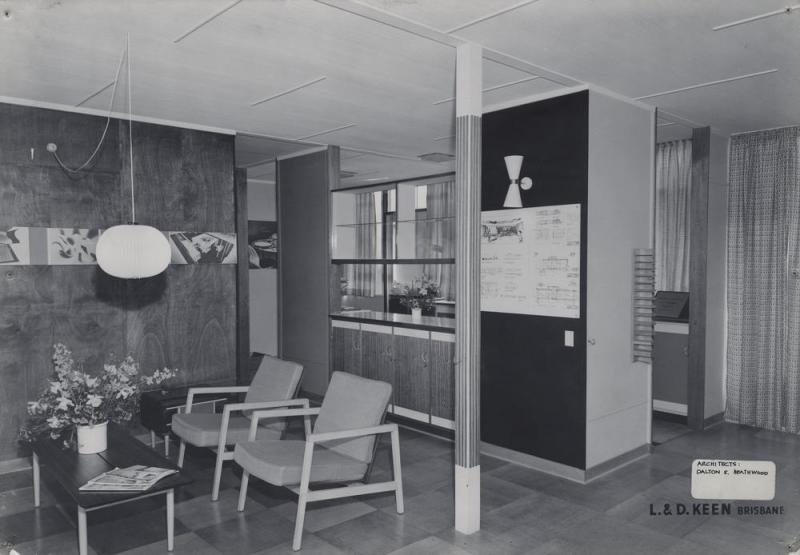 The house, designed by Peter Heathwood to exhibit the possibilities of plywood both externally and internally, was the winning entry in a competition held by the Queensland Plywood Board at the Brisbane Exhibition Grounds in 1958. The prize money enabled Heathwood and John Dalton to start their architectural practice. The house was purchased by Heathwood’s sister and removed to the Brisbane suburb of The Gap in 1963.
[Information taken from: Robert Riddel, Significant Queensland 20th century architecture: a report, retrieved 2 December 2013, from http://www.architecture.com.au/docs/default-source/qld-notable-buildings/20c_arch_final_report_for_review-%281%29.pdf?sfvrsn=2)]
(Description supplied with image)