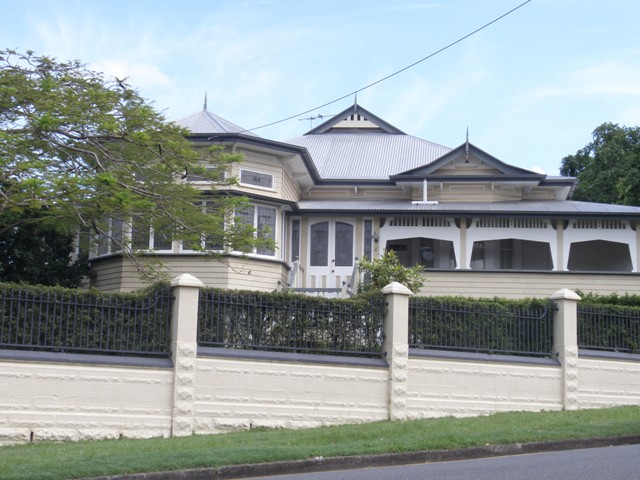 This fine residence, located in a prominent position in Toowong, was constructed circa 1912 for banker Richard Shears and his wife Ada. In 1936 the property was purchased by Arthur Fadden who that same year was elected to the House of Representatives as a member for the Darling Downs. He later became leader of the Federal Country Party and was acting Prime Minister in early 1941 before becoming the Prime Minister for a brief period from August to October later that year. After Fadden died in 1973, the property remained in the family until 1988. Subsequent owners have added a swimming pool and tennis court to the property.

In April 1912, banker Richard Shears and Ada his wife bought this land at auction as part of a 3/4 acre block. The Shears evidently built this house immediately, as the Post Office Directories (PODs) show them living in here in Bowersholme, as it was called, from 1912-3. In 1934 Richard and Ada divided and sold a 24 perch block, and in 1936 sold the house and remaining land to (Sir) Arthur Fadden.

At the time, Fadden was a chartered accountant in Queen Street. However, in 1936 he was elected to the House of Representatives as member for the Darling Downs. He was to later become leader of the Federal Country Party, acting Prime Minister in early 1941, and then briefly Prime Minister from August to October 1941. He lost office, and the Coalition lost power when Labor obtained the support of two independent MHRs.

He became Treasurer in 1949 when the Coalition regained office, serving until 1958. Known for his “rough-and-tumble” parliamentary style, Fadden died in 1973, and this property passed to family members. It remained under trust, administered by various members of the family until 1988, when it was sold. Subsequent owners have added a swimming pool and tennis court.

It is likely the house stands upon the site of the first Toowong State School (1880). The school moved to the present site in Quinn Street, Toowong in c.1910. A newspaper article in 1998 claimed that the house had been built by a Toowoomba builder, who purchased the land and built the house for his son (presumably Richard Blake Shears) as a wedding present.

An L-shaped timber Federation-style house with a corrugated iron roof, a prominent projecting wing with semi-octagonal roof and gabled bay window. A separately roofed verandah is screened with lattice and decorative arches to the front and enclosed with casement windows to the side, with timber cladding below sill level. The projecting wing is also enclosed with casement leadlight windows and small leadlight sashes above a bracketed window hood as a continuation of the verandah roof edge. Bifurcated timber stair leads to a pair of doors and glazed sidelights at the verandah line.

as evidence of the early growth and residential development of the Toowong area.