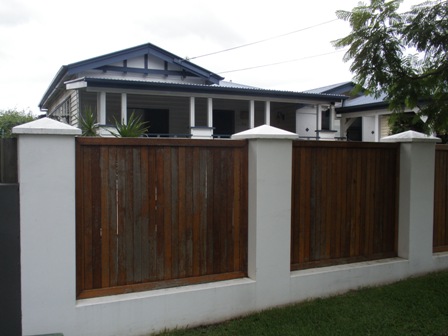 This farmhouse was built in 1936 for Friedrich George Pfingst and his family on what had originally been a 10 acre block. The Pfingst family, who migrated from Germany in 1863 were early pioneers of the Wavell Heights area. Hermann Pfingst purchased 10 acres in 1866 and this land was subsequently passed down to his family. Immediately after World War II, Wavell Heights was earmarked for development and more than nine acres of Friedrich’s land was acquired by the Queensland Housing Commission for the construction of low-cost housing. The remaining land and house were sold in 1957.

The land on which this former farmhouse now sits, was part of 10 acres of crown land purchased by German migrant Hermann Pfingst on 22 November 1866. Pfingst paid ₤10 for the property described as Portion 580 in the Parish of Kedron. The area of Pfingst’s land purchase was originally known as the German Station because of the German missionaries who established a mission for Aborigines at Zion’s Hill (now Toombul) in 1838. This mission closed in 1849 but many German families established farms on the surrounding land, thereby opening up the area for further development.

Hermann Pfingst arrived in Brisbane in 1863 aboard the ship Beausite. In addition to Portion 580, he also purchased Portion 124 giving him 14 acres, 2 roods and 3 perches of land situated between Edinburgh Castle Road (named after the hotel established in 1868) and Rode Road. However, it was Portion 580 that was to remain the primary farmland for Pfingst and the family home was constructed there. Portion 580 was bounded on one side by a government road that would eventually bear his name.

With the opening of the rail line to Sandgate in 1885, the German Station changed its name to Nundah. As a result, the area around Cocks (later renamed Rode) Road became known as West Nundah. It was a hilly area used principally for grazing cattle for the local slaughteryards operated by people such as Tom Cocks. The opening of the Nundah Railway Station on 21 June 1882 encouraged more people to settle in the Nundah district.

After World War One, West Nundah experienced a steady population growth prompted by returning soldiers moving into new estates such as the Rode Heights Estate, Shaw’s Estate, Westwood Estate and Glenora Park Estate. This development had little impact upon the Pfingst’s farming activities. By 1925 the section of Newman Road that ran between Hamilton and Rode Roads had been renamed Pfingst Road. Pfingst Road was then extended through to Edinburgh Castle Road,

Hermann Pfingst passed Portion 580 onto his son Peter Heinrich Pfingst on 6 August 1920. On 23 August 1927, the farm was then transferred to other family members. They were Hermann Heinrick Pfingst, Friedrich George Pfingst and Johannes Wilhelm Pfingst, who was age 16 and therefore considered a minor. When Johannes reached the age of 21 on 12 January 1932, he was accorded full rights to the farm. On 18 July 1932, the farm was transferred into the sole ownership of Friedrich George Pfingst. Friederich Pfingst, with his own family to raise, decided to build a new house on Portion 580. He chose a site facing a new thoroughfare that ran past his land. This was named Hillcrest Avenue. It is likely that the new house was completed during 1936, for according to the Queensland Post Office Directories, Friederich Pfingst began receiving mail at his Hillcrest Avenue in 1937. At that time, Hillcrest Avenue was considered part of Chermside rather than West Nundah. By 1939, Hillcrest Avenue contained three houses, with the Pfingst farm occupying all of one side of the avenue and William Catchpole’s and Frank Jolly’s houses occupying  the other side.

During World War II, West Nundah was marked for major changes. In 1941, when the war entered its third year, plans were made by the Brisbane City Council to turn West Nundah into the ideal new suburb for the postwar period. Modern Queensland Housing Commission homes were planned for wide streets that would meander along the hills of West Nundah. These homes would have views of the expanding city and modern amenities such as a new school and hospital were planned for the suburb. Initially it was proposed to change the name of West Nundah to Beverley Hills but due to the war situation, a more morale-boosting name was chosen. This was Wavell Heights and it was named after General Sir Archibald Wavell who, in 1940-41, was  commander of all allied forces in the Middle East. He was a popular hero of the time as he had led the forces, including Australian troops, that had defeated the Italians in Libya and East Africa and oversaw the defeat of the Vichy French forces in Syria. On 9 October 1941, a patriotic concert at the Imperial Theatre, Nundah, attended by the Lord Mayor and Lady Mayoress of Brisbane, was held to inaugurate the new suburb. Proceeds from this concert went to the Patriotic Fund.

With Wavell Heights marked as a post-war development suburb, it was not surprising that the Pfingst family lost most of their farm to new housing estates. Thus on 11 October 1946, the Queensland Housing Commission acquired 9 acres, 2 roods and 10.8 perches of the Pfingst farm for the purpose of building low cost housing in the area. As a result of this acquisition, the original Pfingst family home was demolished to make way for new streets and homes. Friederich Pfingst was left with his Hillcrest Avenue home set amongst just 2 roods and 20.08 perches from Hermann Pfingst’s original land purchase. Pfingst sold a further 24 perch subdivision to Mildred Lavina Parks on 6 September 1951.

The Pfingst farm was further subdivided into three portions on 23 April 1953. Resubdivisions 3 and 4 were then sold to Cedric John McGregor. This left Friederich with his Hillcrest Avenue home on a 35.3 perch block of land.  The Pfingst family ended their 91 years of farming this land, when they sold the property to Joy Walls and her husband Alexander Norman Walls on 8 October 1957. The Walls family financed their purchase through a mortgage provided by Friederich Pfingst. On 11 August 1960, Alex Walls applied to the Brisbane City Council to have a dwelling added to his land. In 1963, he added a garage extension to the property.

for the evidence it provides of farming in the Wavell Heights area which continued until the Second World War.

as a former farmhouse of the Pfingst family who were early pioneers in the Wavell Heights district.