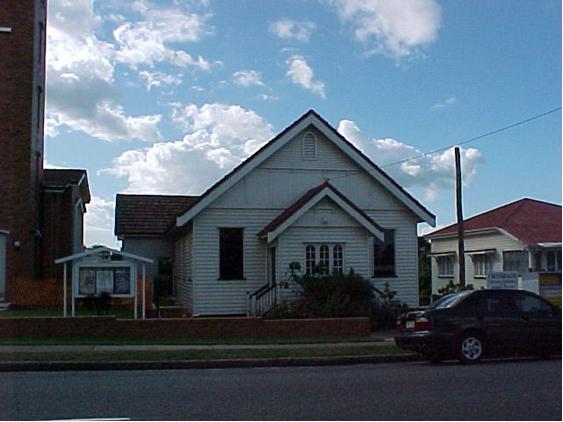 The West Nundah Church Hall was constructed in 1938 and has operated in a multi-purpose capacity as a centre for religious worship, education and social life for the local church community for over 70 years. After the amalgamation of the Presbyterian, Congregational and Methodist churches in 1977, the hall was transferred to the Uniting Church in 1988 and renamed the Uniting Church Hall.

The history of the Methodist Church in Wavell Heights (then called West Nundah) goes back to 1931 when a Sunday school was started in the coach house of Col. G.A. Ferguson residence. Three years later a Ladies’ Guild was formed in 1934.

1935 was an important year for establishing a Methodist presence in the area when the church trustees purchased four parcels of land fronting Rode Road and a decision was made to build a church hall.

The next step was the construction of the church hall on Rode Road which opened on 28 May 1938. This building appeared to function as a multi-use building providing a Sunday school, church services and social activities for the local church community. The Rode Road premises were listed in the Post Office Directories during the war years as the West Nundah Methodist Church.

As quoted in Annals Of Achievement: A Review of Methodism 1847-1947: ‘Wavell Heights, a new and thriving suburb, is the most recent area to be provided with the ordinances of the church. A fine hall has been erected and all branches of Christian work have been established and are in a flourishing condition’.

In 1955 Wavell Heights separated from the Nundah Circuit and became a separate Circuit, also embracing Geebung and North Wavell Heights.

It has been suggested that Wavell Heights, originally known as West Nundah, changed its name in 1941 because of confusion with postal deliveries. It was named after Field Marsh Archibald Wavell, Commander-in-Chief of Allied Forces in the Middle East during 1940-41.

The opening of the large brick Wavell Heights Methodist Church in 1957, next to what we now know as the Uniting Church Hall, was an important milestone for the church community. It reflected the optimism of the church to cater for the growing residential population in the post war years. This included the building of Housing Commission dwellings and the opening of schools such as the Wavell Heights State Primary School in 1948 and the high school in 1959.

A new title combining both parcels of land, amounting to nearly half an acre, was issued to the Trustees for the Methodist Church on 27 May 1958. The land was subsequently registered with the Uniting Church in Australia Property Trust of Queensland in June 1988.

There was further consolidation of church property on Rode Road when the property next to the Uniting Church Hall was purchased. No 147 Rode Road, a former worker’s dwelling, was transferred from Mary Crowe to the Methodist Church in August 1964. The property sale was presumably precipitated by the death of her husband in November 1963. This property was later registered with the Uniting Church Property Trust in June 1988.

The Uniting Church Hall has been an integral part of the Methodist and later Uniting Church community for 64 years, operating both as a church and church hall.

This interwar church is a timber-framed weatherboard clad building with a cross-shaped plan. The main building has a steep-pitch roof, small eaves and prominent front gable with louvred vent. There is a small projecting porch at the front of the building accessed on either side by timber steps.

The original round-headed, multi-pane windows appear to have been altered.

as a religious building constructed to serve the spiritual needs of the growing West Nundah (later Wavell Heights) population in the late 1930s.

as a purpose-built 1930s church hall whose design reflects its use as a centre for worship, religious education and social activity.

as a church hall that has played an important part in the lives of successive generations that have attended services, received religious instruction and participated in community activities on this site.