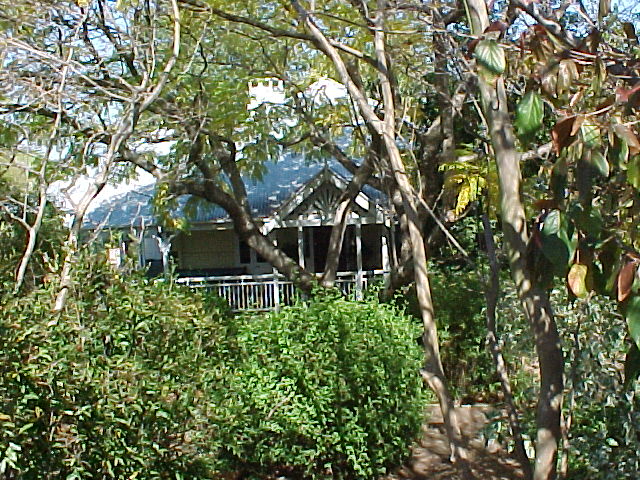 This Federation style residence was built circa 1910 for James Westwood, whose large landholding created a number of new streets in West Nundah when it was subdivided in 1914. Westwood Street is named after the Westwood family, who owned this property until 1946. The house was converted to flats around 1955 but has since been restored as a single dwelling and is one of the few remaining examples of a large Federation style house in the area.

The land, on which this house sits, was part of 14 acres, 2 roods and 3 perches of crown land that was purchased by Herman Pfingst on 13 September 1863. Stewart, a resident of Brisbane Town, paid ₤14.10s.5d. for this land described as Portion 124 in the Parish of Kedron. The land was bounded on one side by a government road that would become Cocks (later renamed Rode) Road. The area of Pfingst’s land purchase was originally known as German Station and it was named after the German missionaries who had established a mission for Aborigines at Zion’s Hill (now Toombul) in 1838. This mission closed in 1849 but many German families established farms on the surrounding land, thereby opening up the area for further development.

Pfingst held onto Portion 124 until 1867. In that year, he disposed of the land to Henry Biggs. Biggs also lived in Brisbane Town. Then on 3 March 1880, Biggs sold Portion 124 to Frederich Wilhelm Bienke. Bienke only held the land for a month before transferring title to Julius Raedel on 22 April 1880. With the opening of the rail line to Sandgate in 1885, German Station changed its name to Nundah. As a result, the area around Cocks Road became known as West Nundah. It was a hilly area used principally for grazing for the local slaughteryards operated by people such as Tom Cocks. Raedel used his land purely for investment purposes. He mortgaged his property for ₤150 on 5 October 1886 with the lender being Thomas Bridges.

Raedel transferred title to Caroline Roper, the wife of Thomas Roper, on 26 July 1887. The Ropers also used the land as collateral when they obtained a mortgage of ₤600 from Mathew Rigby, on 6 August 1888. This mortgage may not have been repaid because Rigby took control of the land on 11 November 1891. Rigby was listed as a resident of Brisbane at the time that he took over the property from the Ropers. When Rigby died on 16 July 1896, his estate passed to a trustee, the local landowner, William Langton Robinson. On 2 December 1896, Robinson allotted Portion 124 to Rigby’s heirs – James Atherton Rigby and John Benarett Rigby.

Then on 21 December 1906, James Westwood became the new owner of Portion 124. By this time, many of the original land grants in the area had been subdivided into allotments suitable for small farming. But Westwood did not immediately follow this trend and, instead, he mortgaged the land with the intention of building a home for his family. In fact, he took out two mortgages in quick succession. The first mortgage, for the amount of ₤200 was supplied by the Brisbane Permanent Building and Banking Company on 6 May 1908. On 7 July 1908, the same company provided a second mortgage for ₤25.

Westwood’s name appears in the Queensland Post Office Directories for the first time in the 1911-12 edition. As the address survey for each edition was conducted in the year prior to publication then it can be assumed that Westwood had built his residence in Rode Road by 1910. Prior to the erection of his Federation-style home on Rode Road, Westwood had lived in Milne Street, Albion. Westwood’s property was surrounded by small dairy and pineapple farms so his house style suited the rural character of West Nundah. This impressive home was graced at the back with views of Brisbane’s northern suburbs.

James Westwood possibly used his second mortgage to pay for the surveying and subdivision of Portion 124. West Nundah was considered suitable for redevelopment and the Westwood’s housing subdivisions may have been one of the first examples of the type of housing estate that would change the area and create the suburb of Wavell Heights. The first of Westwood’s subdivisions was sold to Joseph England Westwood on 31 December 1914 and the last block was not sold off until 1951. Westwood retained 1 rood and 8 perches for his own home. Westwood’s estate created two unnamed (later Zeehan and Deloraine) streets. The nearby Rode Heights Estate would create Barker and Palomar Streets in the 1920s. By 1917, James Westwood had left West Nundah and a relative, Richard Westwood was residing at 214 Rode Road.

During World War Two, West Nundah was marked for major changes. In 1941, with the war entered its third year, plans were made by the Brisbane City Council to turn West Nundah into the ideal new suburb for the postwar period. Modern Queensland Housing Commission homes were planned for wide streets that would meander along the hills of West Nundah. These homes would have views of the expanding city and modern amenities such as a new school and hospital were planned for the suburb. Initially it was proposed to change the name of West Nundah to Beverly Hills but due to the war situation, a more morale-boosting name was chosen. This was Wavell Heights and it was named after General Sir Archibald Wavell who, in 1940-41, had been commander of all allied forces in the Middle East. He was a popular hero of the time as he had led the forces, including Australian troops, that had defeated the Italians in Libya and East Africa and he overseen the defeat of the Vichy French forces in Syria. On 9 October 1941, a patriotic concert at the Imperial Theatre, Nundah, attended by the Lord Mayor and Lady Mayoress of Brisbane, was held to inaugurate the new suburb. Proceeds from this concert went to the Patriotic Fund.

The end of the war saw a postwar housing boom in Wavell Heights. By 1946, Westwood’s home was only one of three houses situated on that section of Rode Road between Deloraine Street and Pfingst Road, though a row of eight had been erected straight across the street from 214 Rode Road. Thomas Henry Andrews bought Westwood’s home on 10 July 1946. Andrews mortgaged the house and land twice during his period of ownership. On both occasions, the finance was provided by Charles Edward Cranston, Henry Hamilton Stone and William George Thorne. The first mortgage was on 10 July 1947 while the second mortgage was on 15 October 1951. By 1950, the Federation house at 214 Rode Road was completely surrounded by new, mainly brick homes.

On 10 September 1953, Mary May Ann Easton, the wife of Gordon Easton became the next owner of the Westwood residence. On 5 May 1955, Mary received Brisbane City Council’s permission to covert her large house into two flats and these may have been the first flats to appear in Wavell Heights. Her husband was the builder who handled the conversion. She mortgaged the property through the National Bank on 11 November 1957. The mortgage had not been repaid by the time of Mary Eaton’s death in 1970 and the Union Fidelity Trustee Company became joint owners with Gordon Easton on 8 September 1970. After Gordon’s death in 1974, the house and land at 214 Rode Road passed to the company’s control. It was sold to the current owners, Terence Neil Evans and Terry Elizabeth Evans on 18 April 1984.

as a substantial Federation style residence built in the West Nundah farming district circa 1910.

as one of the few remaining examples in Wavell Heights of a large Federation style residence.