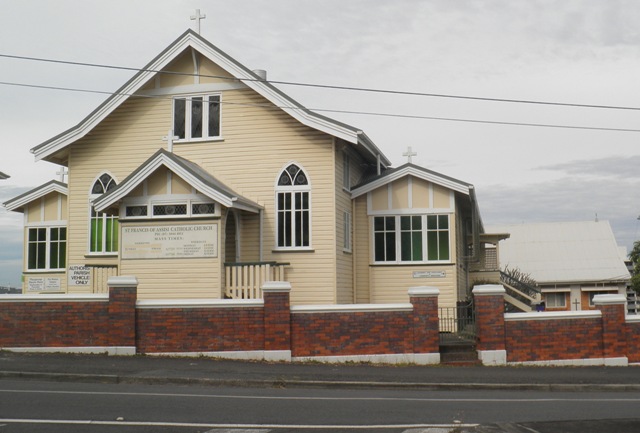 This 1923 church and 1928 school are part of a religious precinct that came from the plan of the prominent Brisbane Archbishop James Duhig to expand the influence of the Catholic Church throughout Queensland after World War One. This religious precinct was the focal point for the Catholic Church’s religious, social and educational activities in West End/Highgate Hill from the early 1920s onwards. It is a religious and educational precinct built along Dornoch Terrace that includes the adjacent St. Francis Presbytery (1928) and the Sisters of Mercy’s St. Francis Convent (1928). The entire precinct is fronted by a brick fence that acts as a unifying marker for the four separate buildings within the precinct. Architecturally, St Francis’s Church is significant as an example of an interwar church designed in the Carpenter Gothic style by George Trotter. The timber school building has been designed with elements of the domestic bungalow style of the interwar period.

In 1919, James Duhig was appointed the Archbishop of the Diocese of Brisbane by the Catholic Church. Known as ‘James the Builder’, he oversaw a massive expansion program for the Catholic Church in Queensland during the 1920s. By 1930, Duhig had established 21 new parishes, 28 new schools and 100 new churches, just within Brisbane.

As part of this building program, a new Catholic Church building and school were proposed for West End. The architect George Trotter Jnr designed St Francis Church in 1923. In April of that year, Trotter called for tenders for the construction of a new Catholic church on Dornoch Terrace. On 10 June 1923, the foundation stone was laid by the Apostolic Delegate, Monsignor Cattaneo. The church was opened and blessed by Duhig on 26 November 1923, but at that time it had been constructed across the road from its present site at 47 Dornoch Terrace.

It was soon discovered that the original site was not large enough for both the new church and the proposed school. In 1926, the Catholic Church took the opportunity to acquire a large block (8 acres) of land, located just across the road from the new St. Francis Church that belonged to the O’Reilly family who were Scottish Presbyterians. Duhig liked to select sites that were at the centre of a suburb, preferably on high ground. O’ Reilly’s Paddock along ridgeline of Dornoch Terrace fitted Duhig’s strategy perfectly. Duhig stated at a St Francis School ceremony in 1961:

“We were very fortunate in being able to secure this fine property which has made the headquarters of a flourishing parish …The site is an ideal one on the banks of the          Brisbane River and in the midst of very delightful natural scenery”.1

So St Francis Church was moved across Dornoch Terrace to its current location. In February 1927, Duhig separated West End and Highgate Hill from St. Mary’s Parish of South Brisbane to create the new West End Parish. The first parish priest was Father E.J. Keating who arrived in West End February 1927. Upon his arrival, Keating found that his new parish had poor facilities. Keating recalled that in 1927, he had found:

“…a small church, a ramshackle building where the convent now stood, a 40 year old fence along the front, a cow hall and a large number of gum trees”.1

The church building was enlarged twice between 1927 and 1937. In order to meet the payments still due on the land, the Catholic Church subdivided about five acres of it on the river side and the blocks were placed on the market soon after the completion of the proposed school. These riverfront subdivisions, some of the few such blocks left undeveloped in the area at that time, sold quickly and delivered much-needed funds to the building program.

The building of the proposed school by H. Cheetham was finally commenced in 1927. The single school building was designed by the architectural firm of Hall & Prentice, who were also engaged, at this time, with the construction of Brisbane’s new City Hall.   St Francis of Assisi School was blessed and opened by Archbishop Duhig on 22 January 1928. The total cost of the school’s construction was ₤3,320. The school started with 113 enrolments. Within a few years this had increased to 250 pupils.

From 1932-36, the Catholic Church obtained labourers from the Relief Work Scheme, supervised by Mr. Joe Donnelly and Mr. J. Rymer, to level and improve the school grounds. They had built a rock and concrete retaining wall using over 1,000 tons of quarried stone including material dug from the site; two tennis courts and a basketball court.  A brick fence that fronted the Church and School and the adjoining Catholic Church buildings was completed by 1934.

In November 1937, celebrations were held to mark the tenth anniversary of the West End Parish.  The main ceremony was officiated at by the Administrator of Brisbane’s main St. Stephen’s Cathedral Dr. J. English.

In 1961, the St Francis of Assisi School building was supplemented by a brick and concrete addition situated to the southern side of the original building. The extensions were opened and blessed by Archbishop Duhig on 23 July 1961 in the presence of the parish priest Monsignor E.J. Keating. The 1961 renovations cost £24,000. A brick block was added to one end of the school building thus providing three extra classrooms on the upper level and a domestic science department on the ground level.

The reduction in housing in the parish due to industrialisation; the conversion of many old houses into flats and boarding houses for single people and changes to the education system such as end of the state Scholarship exam and the policies introduced under the Radford Scheme were all contribution factors to the school’s declining enrolments in the late 1960s and early 1970s. The school closed in 1974. Since then it has served as the Remediation Centre for the Archdiocese of Brisbane

The timber chamferboard and galvanised iron roofed church is a late example of Federation Carpenter Gothic design incorporating later bungalow influences. The Church features a large pitched roof, sitting proud of the wall line at the front and with side eave lines extended within the main roof span. The main building is flanked by expressed gabled verandahs. The gables are sheeted and battened in an interwar style, and are crested by simple timber crosses above the gable ridge. The side eaves feature exposed rafters.

The streetscape elevation is symmetrical, and exhibits a grace and sense of order appropriate to the use of the building as a place of worship. The composition includes gothic arched and other casement windows of deep green glass in timber frames. The entry to the church is a dual access porch with timber battened interwar balustrade design.

This broad terracotta tiled and timber building displays characteristics of the bungalow style found in domestic design throughout Brisbane in the interwar period. The large low pitched roof with its gabled rear extension features sheeted and battened gable treatments, with the gable of the Dornoch Terrace frontage marked in an arched gothic shaping in the centre. The roof edges show expressed rafters below generous sloping eaves. The verandah posts are supported with tapered brackets, with the verandah bays infilled by a range of shading screens including flat faced balustrades, lattice and opened screenwork.

The building is significant as a largely intact example of interwar school design incorporating adaptation of contemporary residential style. The broad, lower pitch of the roof is a prominent streetscape element, in contrast to the late Federation gothic church to the east.

Both buildings have a prominent presence, or are complimented in the local streetscape. This position is highlighted by the face brick and rendered coping fence with wrought iron gates, which extend along the frontages of the adjoining Convent.

as part of a precinct which is representative of the vibrant 1920s Catholic Church construction program initiated by Brisbane Archbishop James Duhig.

as an example of a Carpenter Gothic style church from the interwar period.

as a purpose-built Catholic Church and School built to serve the new West End Parish during the Interwar years.