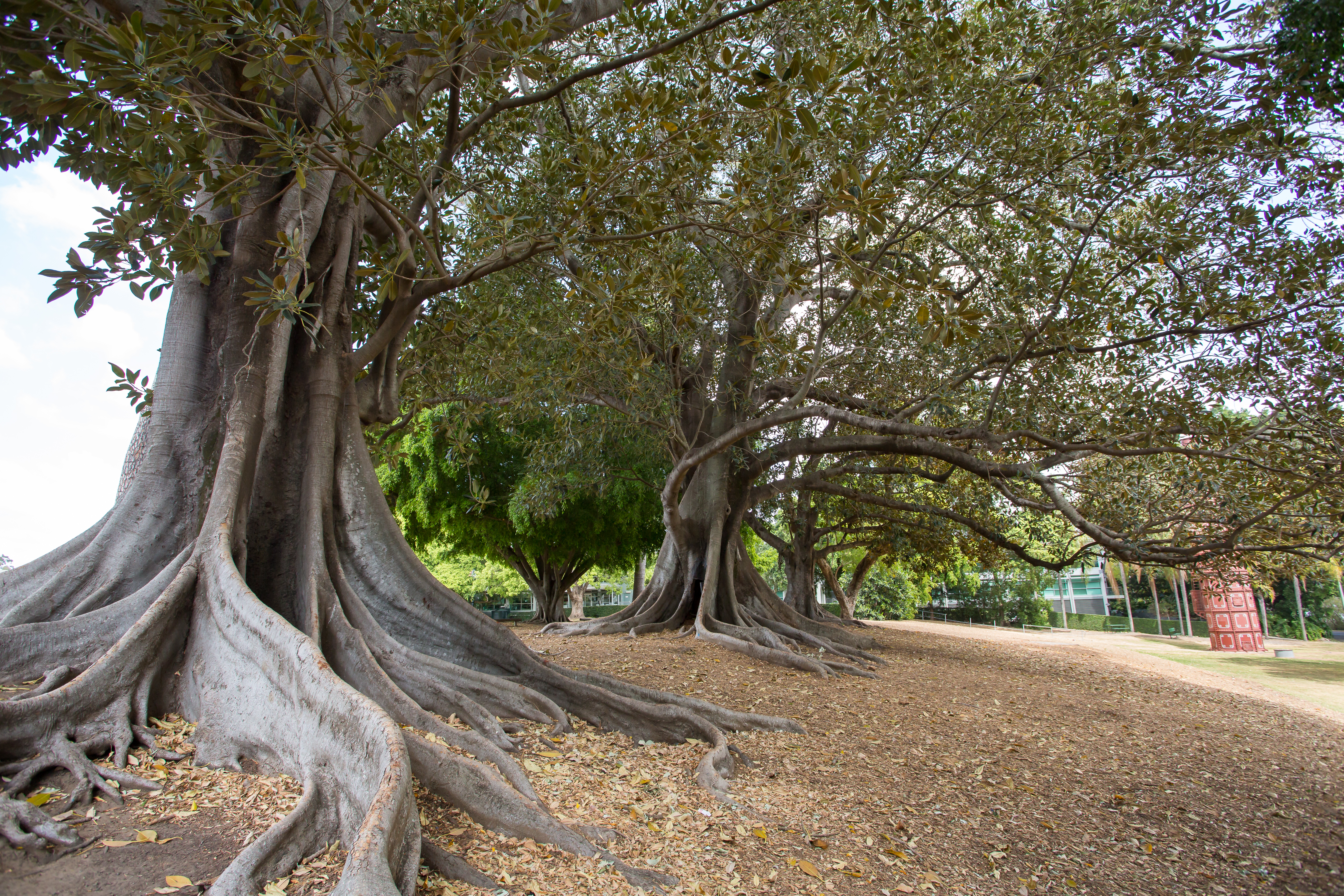 Gazetted by the South Brisbane Municipal Council in 1901, Davies Park is situated at the corner of Jane Street and Montague Road, West End, and overlooks the Milton and Toowong reaches of the Brisbane River. The park became the responsibility of the new Brisbane City Council after the municipal/shire amalgamations of 1925. It has a long association with Rugby League having been leased by the Queensland Rugby League (QRL) from 1910 and became the home ground of the ‘Souths’ club. Extra land was purchased in 1919 for public baths that operated from 1920-67. The park was used as the Olympian Motor Speedway from 1927-30. During World War II, temporary buildings were added as the US Navy requisitioned the park for a receiving barracks and the Australian Army for a military post office. The construction of Riverside Drive in the 1970s isolated the park from the Brisbane River. Its primary use has been as a venue for organised sports and recreational and leisure pursuits.

Dramatic residential growth in South Brisbane in the late nineteenth century precipitated calls for the creation of parks and recreation reserves. Concerns about overcrowding and overdevelopment combined with a desire for outdoor recreation to be provided in suburban areas. Reserves were created at Musgrave Park and the Woolloongabba Cricket Ground, but these quickly became inadequate for the widespread and booming South Brisbane population.

From the early 1890s, residents of the increasingly industrial West End played cricket and football matches on a disused piece of farmland on the river. Following rumours of the sale and development of the site, South Brisbane Council Mayor Philip Nott and Alderman John Davies called a public meeting in April 1899 to promote the idea of a reserve for West End. The West End Recreation Reserve Committee was formed at the meeting, headed by Alderman Davies, and began fundraising and agitating for the reserve. ‘Ald. Davies keeps on pegging away on that West End recreation reserve business,’ wrote The Telegraph in June, ‘he may succeed; may he succeed.’1

The requirements for the West End reserve were varied. The Committee decided that the reserve should be a combined sports ground and public reserve, without high fencing which had discouraged users of the Woolloongabba ground. The South Brisbane Council alderman prioritised a river frontage for the park, to provide public river access which West End also lacked. Floods in the early 1890s had inundated most of West End, including the proposed park site, but this was less concerning because, as the Mayor of South Brisbane later put it, ‘persons were not anxious to patronise recreation grounds in flood weather’. The riverfront farm site met all the desired criteria, and after some negotiation the Municipality of South Brisbane purchased it in 1900. Former owner Phillip Hardgrave was paid £4,400, funded by the Council, the local community and a State government loan. The seventeen acre site was simply known as the ‘West End Reserve’ or the ‘West End Recreation Reserve’.

The official opening ceremony was held on 14 December 1901 and was attended by a large crowd. A cricket match and sailing displays were held, though at that point the only improvement to the site was the installation of a fence.

After the opening, the West End Recreation Reserve Committee directed work necessary to make the park suitable for recreation. Ornamental shade trees, donated by the Botanic Gardens curator and a local nursery business, were planted in 1904. Seating was also provided. Funds for improvements were limited, and fundraisers were held, such as a fancy-dress cricket match in 1908 which drew a crowd of 2,000 people. There were, however, complaints about the smell coming from rubbish dumped on the site, while cattle still grazed on the site.

Changes came in the late 1900s and 1910s. In October 1909 the reserve was renamed Davies Park in honour of John Davies, after a petition signed by six hundred local residents was presented to the Council. Control of the park was transferred to the South Brisbane Park Committee in 1910, and improvement works followed. A number of sporting fields were constructed and cricket, football and tennis clubs vied for ground space. Gardens and additional trees were planted by the Council’s new gardener. A revetment wall and steps were built to provide safe access to the river, while the land along the river was levelled to create a promenade. Carnivals, fetes and band concerts were held. A jetty was also installed, and later a row-boat ferry ran between Milton and the park. By 1932 the park drew remarks that, ‘if all the river bank were as neat and green as this, what a lovely waterway the Brisbane River would be!’1

Davies Park’s association with Rugby League commenced when fields were leased to Queensland Rugby League from the 1920s and the park has been the “battleground” of many interstate and international football matches. Grandstands were built around the main oval for spectators. The first, a memorial grandstand, was opened in 1914. Alderman Davies had died in April 1911, and the Reserve Committee raised £200 to erect a grandstand in his memory. A marble stone recorded that the grandstand was built ‘to the memory of the late Alderman John Davies, whose efforts had enabled the park to be secured as a recreation reserve for the citizens, and after whom the park was named’. The grandstand was extensively altered in 1934, and advertised for sale and removal in 1954.

A section of the park which was not part of the original gazettal was a small allotment of land in the north corner. This was purchased in 1919 and public baths were constructed on the site. The baths existed as an important feature of the recreational pursuits offered by Davies Park until its demolition in 1967.

In 1927 a segment of Davies Park was utilised as Brisbane’s first speedway, the Olympia Motors Speedway. A quarter-mile track was laid on a section of the rugby ground (No. 1 Oval) for the motorcycle races. A contemporary newspaper report judged the speedway to be a great boon for the suburb, as business improved and land values in the suburb increased. A tram loop line, passing the main gates of Davies Park, operated for some time in conjunction with the speedway. However, the Olympian Motor Speedway Company went into liquidation in 1930. Further attempts to use the speedway were unsuccessful and the speedway track was removed in 1939.

Davies Park also became home to some of Brisbane’s residents as the impact of the economic depression was felt in 1929. ‘There is quite a well-ordered little group of “settlers” on land near No. 2 oval,’ reported the Telegraph. The media reported favourably on the condition of the park encampment, and declared in 1935 that ‘the dozen men at Davies Park are probably the most contented campers in Brisbane’. The encampment continued into the early 1940s.

During WWII the park hosted the USN Receiving Barracks and USN Head Quarters and Australian 3rd Base Post Office. Accommodation huts were dotted around the oval, and two parabolic buildings (igloos) were erected on the playing fields. These were later demolished.

The park’s connection with Rugby League continues to the present day as the home ground for the Southern Suburbs Club. The No. 1 Oval was renamed Bill Tyquin Oval in 1978 in honour of Tyquin, a long standing member instrumental in forming the Club. Facilities for the club were installed in the park through the twentieth century, including a club house (1965), canteen (1969) and seating (1970).

The park has also played host to other social and recreational pursuits in South Brisbane. Tennis and basketball courts have been present in the park. Various GPS schools in Brisbane have used the riverside section of the park for boat pontoon sheds. The extant Brisbane Grammar boatshed was constructed in 1974-77. The West End Scout Group maintained a clubhouse and headquarters in the No. 2 Oval of the park until the group merged with the Dutton Park Scout Group in 1989. The Tugun Sporting and Recreation Club took the lease of these premises after the Scouts vacated.

In the 1950s and 1960s the construction of a major riverside roadway, Riverside Drive, effectively separated Davies Park from the river. In 1979 the riverfront promenade was further altered with the addition of the South Brisbane Gas and Light Company’s gas stripping tower. It was relocated to Davies Park about 150 metres from its original location. It is listed on the Queensland Heritage Register [600342].

The river edge of the park was redeveloped to accommodate expanded rowing facilities in 2002.

Davies Park is a large rectangular wedge of land overlooking the Milton and Toowong reaches of the Brisbane River and is bounded by Montague Road, Jane Street and the Brisbane River with light industry to the southwest boundary. The park has entrances from Jane Street and Montague Road. Riverside Drive now runs through the park to the northwest separating the rowing shed facilities from the body of the park.

The park consists of two sporting ovals and associated clubhouse, sheds and seating, rowing sheds, beach volleyball courts, car parking and rich plantings of mature trees. The largest oval, named the Bill Tyquin Oval, is the homeground for Souths Rugby League Club. The second smaller oval is also used for rugby league and houses the Tugun Sporting Club. A roadway off Jane Street runs into the park, separates the two ovals and runs across the park exiting onto Montague Road. The recent freestanding rectangular masonry clubhouse stands off this road and looks across the main oval. A series of bleacher-type stands provide additional seating around the oval. A referees’ box and player enclosure stand to the edge of the oval. A turnstile is located to the north of the oval and is approached from Jane Street. A small freestanding masonry building to the northeast accommodates change rooms and a kiosk.

The park accommodates soccer fields on the second oval and beach volleyball courts between the two ovals. The park is notable for the striking row of mature shady Moreton Bay Figs to Montague Road and an avenue of figs west of the second oval. It is also distinguished by plantings of bauhinias, weeping figs, white figs, cigar box cedars and white beeches.

Brisbane Grammar School and other club rowing sheds stand to the river edge northwest of the park. The early Gas Stripping Tower stands to the west corner of the park. A drinking fountain in quarry-faced porphyry, erected to the memory of James Montgomery, stands to the east corner onto Montague Road.

as a major twentieth century recreational area in the district.

as a sportsfield laid out for playing the game of Rugby League.

as an important element in the streetscape and riverscape, distinguished by its lush plantings of mature trees surrounding open playing fields.

as the homeground for Southern Suburbs District Rugby League Football Club and accommodating the rowing sheds for a number of Brisbane rowing clubs including the Brisbane Grammar School.