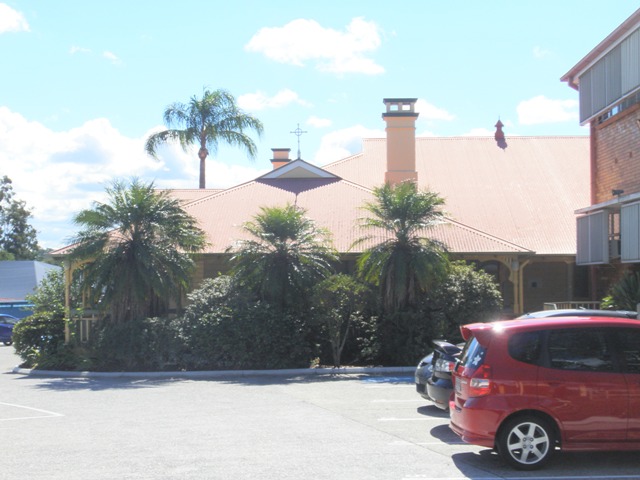 This timber building was constructed around 1901 as a private residence for John Stewart, a prominent member of Brisbane society and the son of successful clothing merchant Alexander Stewart. The Stewart family built the nearby house of ‘Glen Lyon’ set on 250 acres in 1876. Purchased by the Sisters of Charity in 1925, the building was converted into St Finbarr’s Primary School which opened that year with 28 pupils. Due to Ashgrove’s interwar residential building boom, this number had increased to 175 within two years and the decision was made to introduce secondary students. In 1941 the school was renamed Mt St Michael’s College and this building has since remained an important part of the school precinct through its use as a convent.

Grantully was built around 1901 for John Stewart, the eldest son of Alexander Stewart, a successful merchant and one of Queensland's largest clothing manufacturers.  It was named after a location near Alexander Stewart's birthplace in Scotland.  The name of the house has since been incorrectly spelt "Grantuly".

Alexander Stewart purchased a 250 acre property at Ashgrove in 1875-76 on which he built his home stately home Glen Lyon. The property was bounded by what is now known as Stewart's Road and extended along both sides of Enoggera Creek.

In 1901 just over eight acres on the eastern edge of the Glen Lyon estate was transferred to Jeannie Maxwell Stewart, the wife of John Stewart. Grantully was built soon after.  Prior to building this house, Stewart and his family lived at Glen Lyon, and for a few years in a house at Ashgrove named Upotipotpon.

At the time Grantully was built, Ashgrove was a sparsely populated rural community.  Despite its close proximity to the city, Ashgrove was relatively slow to develop.  The district's earliest extant house was built at St John's Wood around 1865.  The following year Waterworks Road was built to provide access to Enoggera reservoir and a few scattered farms and gold diggings were established.  By the mid 1870s when construction began on Alexander Stewart's home Glen Lyon, the district was still mostly bush and vacant land.  Among the area's first suburban housing estates to be offered for sale was the Holmesbrook Estate (later the Grove Estate) in the late 1870s, but the lack of public transport to the area meant that suburban expansion was slow.  By the mid-1880s just 67 residents were recorded in Ashgrove.  By the turn of the century, the area was still mostly rural, dominated by dairy farms, market gardens and some scattered houses.

Alexander Stewart emigrated to Brisbane in 1858 and established a small clothing retail business.  He later entered into a partnership with his friend William Hemmant, opening a general drapery on Queen Street.  The partnership dissolved in 1871 when Hemmant was elected to parliament, although Stewart continued to trade under the name Stewart and Hemmant.  In 1898 he opened a clothing factory in Fortitude Valley, one of the first in Queensland devoted entirely to the manufacture of clothing.  The company and its products became household names, producing clothing such as moleskin trousers under the Manx label and shirts under the Thistle brand.

In 1924, the same year in which the Glen Lyon estate was subdivided for housing, Grantully was also put on the market.  Over five acres were sold to T. M. Burke, the developer responsible for creating the Glen Lyon Gardens housing estate, and the remaining land, comprising two and a quarter acres, and the house were sold to Thomas Joseph Moore.  Moore mortgaged the property in 1924, but the following year sold the house and land to trustees for the Sisters of Charity, a teaching order from Sydney.

On 1st June 1925 St Finbarr's Primary School opened its doors and the five sisters taught 28 pupils on the verandahs of the house.  A week later, Catholic Archbishop James Duhig opened and blessed the convent, which occupied the old Stewart house.  The school and convent were named in honour of Sister M. Finbarr Sullivan who was the first Sister of Charity to be buried in Queensland.

The school grew rapidly, reflecting the residential growth that occurred in Ashgrove in the 1920s and 1930s.  By 1927 there were 175 pupils enrolled.  The sisters held frequent fund raising events to help keep the school going, and these were strongly supported by the locals, highlighting the importance of the school to the local community.

The St Finbarr's Parish Church was established in 1927 and the primary school was transferred to classrooms below the timber church building.  At this stage the decision was made to introduce secondary classes, and secondary girls took over the verandahs at Grantully.  The two acre property was steadily built upon over the ensuing years with additional facilities.  In 1934 a kindergarten was opened to cater for the many young families that had moved to the district.  In 1941 a new brick secondary school building was completed and the secondary school became known as Mt St Michael's College.  Several further additions were made over the following decades.

Grantully still serves as a convent, and is the heart of the school precinct.  It was the focus of the School's Diamond Jubilee celebrations in 1985, serving as a stage for entertainment, with audiences gathered on the lawn in front of the house.  The Sisters of Charity Education Council still conducts the College, but their charge over the Primary School ended in 1981.

as it provides evidence of the development of the rural residential nature of Ashgrove around the turn of the century.

for the important role its has played in the lives of generations of students who have attended school there since the 1920s.

for its association with the Stewart family who owned a large estate in Ashgrove from the mid-nineteenth century.