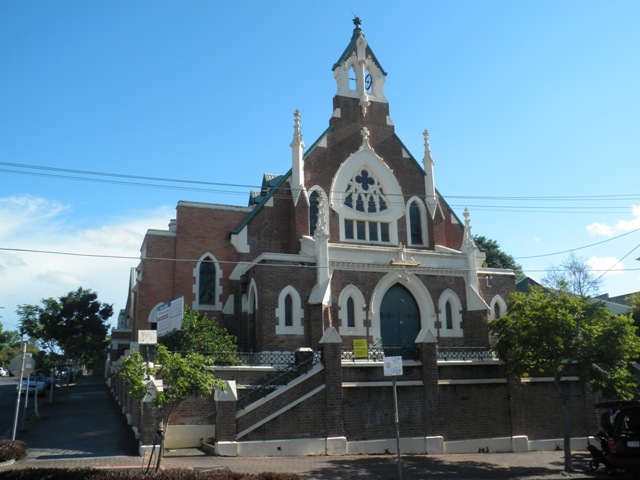 This large brick Gothic style church was completed in 1885 in response to the needs of the growing Methodist population in West End. It has been in continuous use as a place of worship by the local Methodist and Uniting Church congregations since that time, and has a longstanding and enduring significance for that community. The church is a local landmark and is important for its aesthetic qualities.

Methodist worship officially commenced in Brisbane in 1847. By 1849 there were two churches, one in North Brisbane and one at Ipswich. There were also three other preaching places, at Kangaroo Point, Zion’s Hill and in South Brisbane. Through missions and other work, Methodism spread, so that Wesleyan Methodists made up 6.5% of the Brisbane population in 1881. Another 1.78% were Primitive Methodists or belonged to the United Methodists Free Church. In the economic boom period of the mid-1880s the figure rose to 6.1% Wesleyan and 2.2% Primitive, however by 1891 the figures had fallen to 3,029 or 5.4% and 1,099 or 1.6% respectively.

Although the idea of erecting a Wesleyan Church in West End had been first raised around 1870, it was abandoned as churches of other denominations were built in the area. The founding group for a West End church began in 1884 in a cottage in Stephen Street, West End, where the Reverend H. Wiles held services. Rev Wiles was the Superintendent Minister of the Stanley Street Methodist Circuit. During that first year the church group grew steadily. Increased numbers led to the appointment of a committee to gather finance for the provision of a permanent place of worship. From funds raised, the committee purchased land on the corner of Sussex and Vulture Streets, West End and vested it in trustees. The finance committee was comprised of Messrs J. Harris, W. Steele, R. Rogers, J. Nicklin, D.T. Stewart, C.H. Gardner, W.L. Brierly, J.R. Campbell, F.A. Narracott, T. Lee, F.T. Brentnall, J. Potts and J.T. Snow.

The foundation stone of the West End Methodist Church was laid by J. Potts JP on the 1 January 1885. A bottle containing copies of local papers and a memorial identifying the district's Wesleyan superintendent, the church trustees, architect and contractor, was placed under the stone. The contractor, W. Neville, built the church to the design of architect Alexander B. Wilson.

Born in 1857 Alexander Brown Wilson worked in the Queensland Department of Public Works from 1875 until 1882 when he became ‘principal’ draftsman in the private practice of former Colonial architect F.D.G. Stanley. In 1883 travelled overseas to study and qualify for admission to the Royal Institute of British Architects before opening his own office in August 1884. During the economic boom of the time Wilson was inundated with work. During 1884-85 he designed 35 fine houses as well as speculative cottages and non-residential projects. He entered and won design competitions from the early 1880s. In 1884 Wilson won the architectural competition for this Wesleyan Church at West End. From being the only Queensland member of the Royal Institute of British Architects, Wilson in 1888 was “a foundation Fellow of the Queensland Institute of Architects, architect and surveyor to the Imperial Deposit Bank, Building & Investment Company of Queensland, the South Brisbane & Suburban Permanent Building & Investment Company and the Bowkett Benefit Building Society. A devout church-goer Wilson was also honorary architect to the Presbyterian Church of Queensland and consultant to the Queensland Congregational Union.”

The Brisbane Courier reported that the expected cost for the church would be £1300. It took until November to complete the brick church which was actually erected for the sum of £2500. The Reverend George Brown of Sydney performed the opening service on the 15th of that month. The Brisbane Courier of 16 November reported that the church
is constructed of brick and stone with concrete foundations, and is 60ft long by 30ft wide. The floor is of cement and the walls are covered with cement in imitation of stonework. The windows are glazed with tinted cathedral glass, and those in the gables and chancel with stained glass. In the front of the building is a vestibule floored with encaustic tiles, having communication with the aisles of the church by means of two swing doors. The roof is constructed with pine principals and purlins, boarded and covered with shingles, the material being left in plain unpainted wood. The building is of the “decorated English” design, and is capable of seating about 150 people.

In 1888 church attendance numbers made it possible for the West End district to be proclaimed by the Methodist Church hierarchy as a separate circuit in the charge of probationary minister, the Reverend W. Brown.

Limited finance postponed the erection of a parsonage until 1902 and a church residence until 1916. During 1924 the interior of the church was altered and a new organ was donated to the church by the choir master, Mr R.J. Archibald. Extensions were later made to the church's porch and choir area. By 1926 the debt stood at £1,700. Probably due to the severe financial hardships associated with the impact of the Depression of the 1930s, it was not cleared by the church's Ladies Guild until 1939. Further alterations based on designs by Cook and Kerrison, were made during the 1960s.

In 1977, when the Uniting Church was formed by the amalgamation of Congregational, Presbyterian and Methodist Churches, the church was renamed the West End Uniting Church. It continues to serve the local Uniting Church community.

This tall church, rising from an elevated entrance level raised above Vulture Street, has a commanding presence in the streetscape. The strongly contrasted dark brown face brickwork and painted rendered trim increases the visual impact of this building. The Gothic style ornamentation of the church front effectively accentuates the height of this building: it begins with capped buttresses to the street front retaining wall, extends through rendered pinnacles on the entry porch and mid-gable buttresses and culminates in a twin-bellcote strongly massed against the sky at the gable apex. A significant number of alterations to the original building have occurred over time.

The original facade is symmetrical around the flat parapet roofed entry porch. The central gothic arched entry door is flanked by two smaller gothic arched windows. The entry porch has since been extended, using matching coloured bricks. Above the entry porch the original three-sided central leadlight window has had flanking gothic arched windows added and a mullioned strip window inserted below. A new side aisle with discernibly new brickwork has been added, running outside the original side wall to Sussex Street. This addition with a flat parapet roof and simplified rendered cornice, is divided into bays with buttresses and is lit by flat topped windows, one to each bay. This side aisle is terminated at the front elevation with a new mid-height corner tower with flat roof. A new colourbond steel roof has replaced an earlier roof cladding. The number of irreversible alterations to the original church is considerable and while the new side aisle could be seen as generally complying with good conservation principles, its prominence on the Sussex Street frontage impacts considerably on the cultural significance of the building.

The adjoining kindergarten is a gable-roofed brick structure with its roof form at right angles to the church. This building abuts what appears to be the vestry of the original church, with heavily moulded rendered surround to a pair of gothic windows centred on a gable end wall with buttressed corners. A new door appears to have been cut into a corner of this wall. The kindergarten has a new entry porch in the same style and materials to match the new side aisle to the church. The kindergarten has three lancet windows over the entry with a taller middle window pushed toward the gable apex. Pairs of sprung arch topped windows flank the entry. A poorly resolved addition has been constructed along one side of this building with lighter coloured bricks and a lower pitched roof altering one side of the frontage to Sussex Street.

A simple timber and tin, Federation period highset house to the rear of the site, beside the Kindergarten, completes the precinct. This house is elevated behind a rendered retaining wall to Sussex Street.

as it is a purpose built place of worship that was constructed in response to the needs of the growing West End Methodist community during the 1880s.

as it is a large brick church of attractive form with complimentary fence occupying a prominent position on Vulture Street and possessing landmark qualities.

as it is a Nineteenth century church that has remained in continuous use thereby playing an prominent and enduring part in the lives of the successive generations who attended services and or who received religious instruction on the site.

as a church designed by esteemed Brisbane architect A.B. Wilson, the first Queensland member of RIBA and foundation Fellow of the Queensland Institute of Architects.