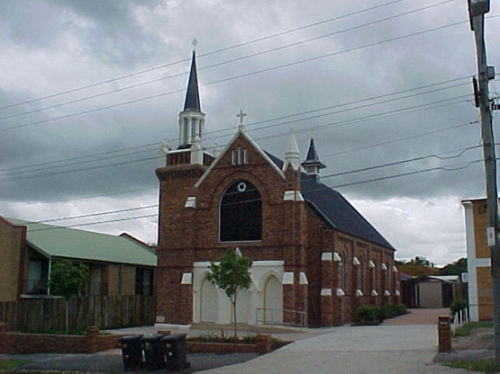 This Federation Gothic style church, designed by prominent architect Charles McLay, was constructed in 1896 for the local Lutheran community. The church was renovated in 1937, and again in 1996, before being badly damaged in an arson attack in 2000. However, it was decided to rebuild the church and in September 2001 it was reopened. With its attractive architectural features, this late nineteenth century church continues to make a fine contribution to the streetscape.

German Lutheran settlers formed a congregation at South Brisbane in 1862. They erected a small wooden church on an acre of land bounded by Cordelia, Merivale and Gleneg Streets. The land had been obtained by a deed-of-grant signed by the first Governor of Queensland, Sir George Bowen. The little church was enlarged in 1882 and four cottages were also erected on this land. By the early 1890s, the population base for the congregation had moved more to the East Brisbane, Annerley and Woolloongabba areas. The 1893 flood of the Brisbane River did considerable damage to the four cottages and helped to facilitate to move the church site.

Land was purchased in Hawthorne Street, Woolloongabba and the prominent architect Charles McLay was asked to design a new church. The bricks and timber from a three-storeyed hotel situated near the Stanley Street Bridge, in East Brisbane, that was due to be demolished, were purchased by the congregation for 35. The bricks were then transported by horse-drawn dray to the site. The number of second-hand bricks available, plus finances, limited the size of the church. The size of the church is 67 feet in length and 26.5 feet in width. It was designed to seat about 200 people. In total, it cost 1,000 to erect and furnish the church. On 12 October 1895, the Queensland Governor, Sir Henry Wylie Norman, laid the foundation stone of a new Lutheran Church. The church was dedicated on 10 May 1896, with 1,000 people in attendance, with a contemporary report describing it as a ‘neat building in the Gothic style.’

The old church building in Cordelia Street was dismantled and re-enacted as a hall and schoolhouse beside the new church in Hawthorne Street. Two railway cottages were purchased for 35 and from these a single parsonage was erected near the church, on the western side.

On 31 May 1896, the first English Service was conducted although only 62 ft long and 32 ft wide, and capable of seating 250 worshippers, was built to allow extension should that be required. It had a loft ceiling, ornamentally arched, with a modern ventilation system.

The hall, formerly the old Cordelia Street church, was demolished in 1936 to make way for a new purpose-built hall. For the 75th Anniversary of the congregation in 1937, the church was renovated and new stained-glass windows installed. The sudden influx of American servicemen in 1942-45 benefited the church financially, and the congregation was finally able to pay off the church debt. Over the years a number of other congregations were started by members from Nazareth Church, including the Wynnum, Sherwood, Carina and Mt Gravatt congregations.

The parsonage was demolished in 1961 and the house on the eastern side of the church became the new manse. The wooden vestry attached to the church was also replaced by a brick structure. In 1963, a new hall was erected beside the church, on the site of the old parsonage. Fire destroyed most of the old church hall behind the church in 1964. The toilets survived and extra rooms were added to this structure.

In 1977, a second-hand pipe organ (built in 1926) was purchased from the Nundah Anglican Church. Some independent living units for older people were constructed beside the church in the mid-1980s, replacing the manse. A house in Wilton Street became the new manse. For the centenary celebrations in 1996, the church was completely renovated. In addition to weekly English Services, regular services are also held in the Finnish, Swedish, German, Latvian and Estonian languages at the Nazareth Church.

On 7 May 2000, an arsonist broke into the church and set multiple fires. Major damage occurred. All that remained were the solid brick walls, which fortunately retained their structural soundness. The decision was made to rebuild the church as close as possible to its original design, with insurance paying for the majority of the work. At the same time, a new administration building with a vestry/meeting room, pastor’s office, kitchenette and toilets were built behind the church. After many months of planning and construction, the church was reopened on 1 September 2001, with the current Governor of Queensland, Major General Peter Arnison in attendance.

The Nazareth Lutheran Church at 12 Hawthorne Street, Woolloongabba was constructed in 1895-96. Charles McLay, who was a versatile architect, designed it. He is best known for his design of the Customs House in Brisbane and the post offices at Bundaberg and in Fortitude Valley. He was also responsible for the design of the Albion Racecourse and the Queensport Hotel at Hemmant.

The church is built of reddish brick in a simple Gothic Revival style. It has the pointed arches in the doors, windows and chancel, the steeply angled roof and buttresses on the outside of the walls. They are characteristic of the Gothic style. A square, brick tower is located in the north-eastern corner of the building. It is topped with a tall spire with a metal cross at the apex. The spire contains the church bell. A second, smaller spire or ridge turret is located at the apex of the roof, about two-thirds of the length from the front of the building. Both spires have louvred vents that provide ventilation and air circulation.

The front entrance consists of three arched doorways facing Hawthorne Street. They lead into the foyer, which in turn leads into the main section of the church. At the far end is the altar, set in an alcove. Three circular stained-glass windows are set into the walls of the alcove. The interior brick walls are rendered with plaster, which is painted in a pale cream colour. Four narrow stained-glass windows are positioned along each side of the church. The ceiling consists of stained timber. The roof’s interior design is clearly intended to reflect the classic hammerbeam roof. On each side there are three simple, horizontally projecting hammerbeams that are underpinned by large wooden brackets resting on projecting brick brackets. The hammerbeams do not really serve a structural purpose but are largely ornamental. The floor consists of polished timber.

The choir loft is located above the foyer and is reached by a narrow, spiral staircase in the tower. The pipe organ is placed in the choir loft. The dominant feature of the frontispiece is a large arched stained-glass window, which lights the loft. The window has at its apex the Luther Rose. Apart from the pews, which are made of hoop-pine, the furniture of the church is made of silky oak stained to a dark reddish brown council. The altar, pulpit, lectern and hymn-number board all reflect a Gothic style, in keeping with the style in which the church was built.

as a good example of a late nineteenth century Lutheran church.

as a fine example of a late nineteenth century architect-designed Federation Gothic style church which makes a strong contribution to the streetscape.

as a place of worship for the local Lutheran community for more than a century. 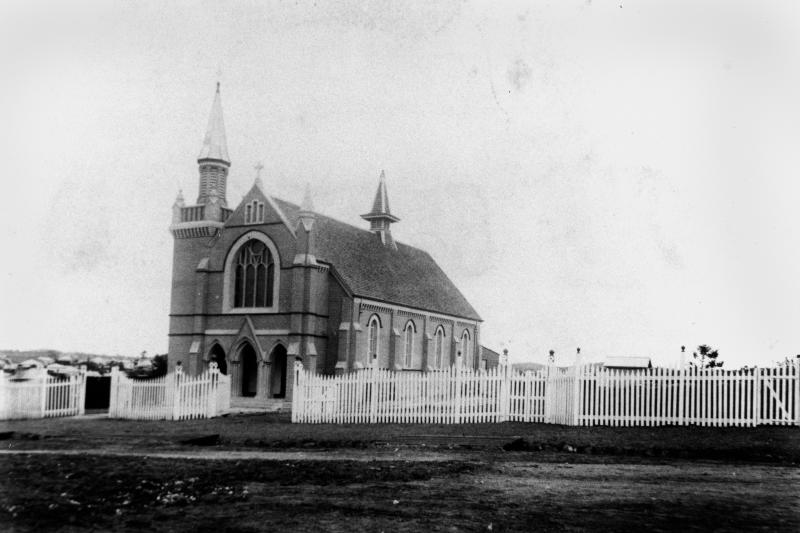