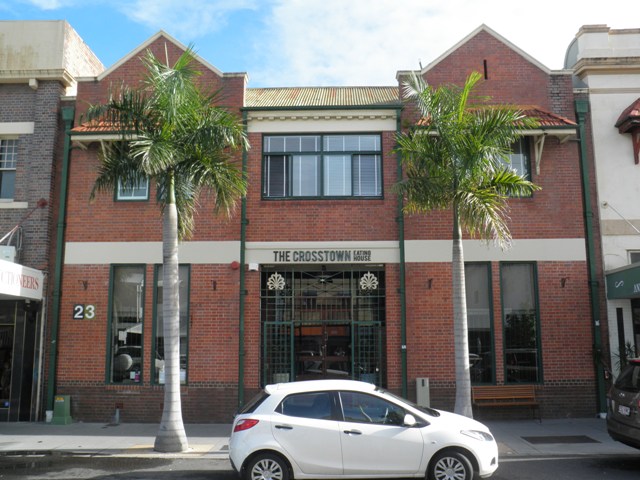 The Baby Clinic was built in 1928, following the Queensland government’s introduction of the Maternity Act of 1922. The Clinic replaced an earlier and smaller Infant Welfare Centre that had been established across the road. Five baby clinics had been built in Brisbane by 1928. Four of these clinics were constructed using a specific state government design. The Woolloongabba two-storey brick building is a unique baby clinic design.

After charitable institutions approached the Labour Government to aid in setting up ‘Baby Clinics’, infant welfare centres began operating in Brisbane in 1918. Four were established in Brisbane: at Fortitude Valley, Woolloongabba, Spring Hill, and West End. Following the introduction of the Maternity Act of 1922 that provided for the establishment of maternity wards and cottage hospitals throughout Queensland, the scheme was expanded. In 1924 the first purpose designed and built clinic was erected in Fortitude Valley.

The government also decided to fund these works from revenue raised by the Golden Casket Art Union. The Art Union was initially run by the Anzac Cottage Committee to fund the building of cottages for the widows and children of Anzacs killed during World War I. With that task in hand, from 1922 until 1975 all revenue from the Golden Casket Art Union was transferred to the Maternal and Child Welfare Trust Fund for maternity wards, baby clinics, bush nurses and a number of other health initiatives. In 1923 an initial amount of £150,000 was available from the Golden Casket.

Under the infant welfare scheme, trained nurses attempted to visit all newborn infants so that they would not suffer from mistakes due to mothers’ lack of knowledge, however it was also reported that increasing numbers of mothers were bringing their babies to the clinics before they were visited at home. Woolloongabba was a high attendance area, second only to Fortitude Valley. In 1925-26 there were 10,907 attendances. By 1927-28 the rate was up to 13041.

The Department of Works had provided a standard plan for the clinics, and rented premises gradually gave way for new Georgian style buildings. The Baby Clinic which had been established in Woolloongabba in 1918 on the opposite side of Logan Rd was obviously too small to cope. So it seems was the standard design. The decision to erect a new Baby Clinic at Woolloongabba consequently represented a departure from the norm, and a non-standard two-storey design was constructed and opened in 1928.

In the Director of Infant Welfare’s second annual report of 1927-28, it was noted that a corresponding fall in attendances at West End clinic was probably directly related to the increase at the new Woolloongabba clinic. In 1927-28 the Woolloongabba Baby Clinic was one of only fourteen clinics operating throughout the State - only five of these were in Brisbane.

This building is an important element in the streetscape of this part of Logan Road. It features two two-storey gabled parapet walls of consistent height, built on the street alignment. A small slit roof vent is in the centre of both gables. The corrugated iron roof is visible between the two parapets over the central section of the building. The brick building has a symmetrical front facade, built around a central recessed porch and features prominent terracotta tiled hoods on timber brackets, to the upper windows.

All the windows have brick sills and powder-coated aluminium joinery. The central window has no hood, but the concrete beam of the upper level ceiling is expressed in the exterior facade along with decorative corbelling. Between the two levels a concrete beam is also expressed as a strip right across the front facade. The porch is enclosed with metal security screens and doors, but with several decorative fan features to the top on both sides.

The building is partially intact externally. It is of note that an awning has been recently added to the front of the building in line with the neighbouring building’s awning.

particularly the role of Government concerns with the health and welfare of babies and their mothers.

as a clinic of non-standard design it is a unique building in Brisbane.

as a purpose-built maternal and child welfare Clinics in Queensland.

as it is linked to the Queensland Government's establishment of child welfare clinics.

as it served the families of Woolloongabba and surrounding suburbs.