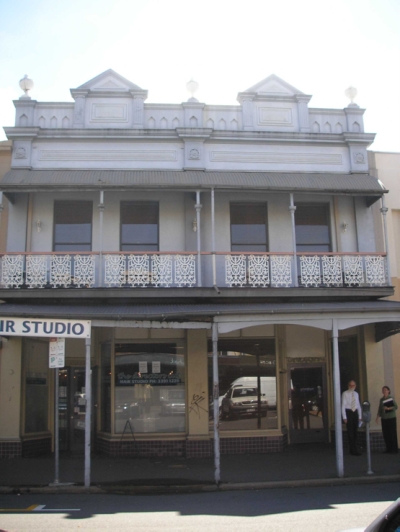 This charming two-storey shop, erected prior to 1893, is significant as evidence of the Woolloongabba Fiveways as a principal shopping district of Brisbane in the late nineteenth and early twentieth centuries. Variously the premises of confectioners, wine merchants, fruiterers and grocers, it also housed a State Fish Shop during the 1920s. A well composed two-storey masonry building with a decorative facade and double shop front, it has intrinsic aesthetic significance as well as making an important contribution to the streetscape.

This shop was constructed on a subdivision of portion 165, an area of just over 16 acres originally granted to James Gibbon in January 1857 when the land was still part of New South Wales. This 12 perch subdivision was purchased by Margaret Ellen Earley, a Brisbane widow, in October 1879.

During the 1880s Woolloongabba boomed as a commercial centre and working class residential district. This was partly stimulated by the development of new transport links: A rail link for passengers and goods was established between Ipswich and South Brisbane in 1884; horse-drawn trams linked South Brisbane to Mt Gravatt via Logan Road from 1887; and the Cleveland railway, terminating at Woolloongabba opened in 1889. By this time, this part of Logan Road was an established shopping centre containing Thomason Brothers, chemists and dentists; a draper, hairdresser, saddler, grocer and produce merchant, wholesale fruiterer, the Bon Accord market, a tobacconist and a carpenter.

The shopping district appears to have weathered the 1890s economic depression reasonably well, having 15 businesses and only one vacant shop in 1893. In October 1893 Margaret Earley mortgaged this property, taking out a loan of £2200 and further advances from the Commercial Banking Company of Sydney. The store was built as two identical adjoining shops. While tenancies changed frequently in this shopping strip at this time, in 1894 a grocer and confectioner joined the shops selling furniture, fruit, boots and meat. These tenancies continued with the grocer expanding his range to include fruit and fish in 1897.

The property was transferred to Allan Nesbitt Foot in 1911. By that time, Thomas Blackburn and his wife confectioners were established tenants having occupied the store from 1900. Their confectionary store was obviously well-patronised, Blackburn confectioners remained in this premises for 17 years. Sellers of fancy goods, a milliner and hairdresser occupied the adjoining shop in the first decade of the twentieth century.

In 1918 when Thomas Blackburn no longer operated his sweet store, Joe Loefiter opened a fish store. In 1920 this became the State Fish Shop, one of a number of state-owned supply stores established by the radical Labor government of the time. It operated alongside a fruiterer and confectioner for about 3 years until the state enterprises financially collapsed in the mid 1920s.

In the 1930s, despite the financial straits of the ‘great Depression’, the stores continued to be occupied. J. Butler, fruiterer leased the store from 1927 until the late 1930s. R. May briefly operated a café and confectionery adjacent to the fruiterer in 1930 until Hughes returned the store to a confectionery from 1931. Ownership of the building passed to Eric Foot and William Tingwell following Allan Foot’s death in 1933.

In January 1942 Penfolds Wines Pty Ltd bought the property. A wine store was operating adjacent to these stores from the 1920s. With the influx of Allied servicemen, particularly the Americans during World War II, the adjacent business could well have expanded. Penfolds continued as owner until the late 1970s.

It has been an investment property since then with a number of owners and uses.

as a double-fronted shop built circa 1893 when the Woolloongabba Fiveways was one of the four principal shopping districts in Brisbane.

as a fine example of a two-storey double fronted nineteenth century shop.

as an attractive, two-storey nineteenth century shop with fine proportions and detailing.