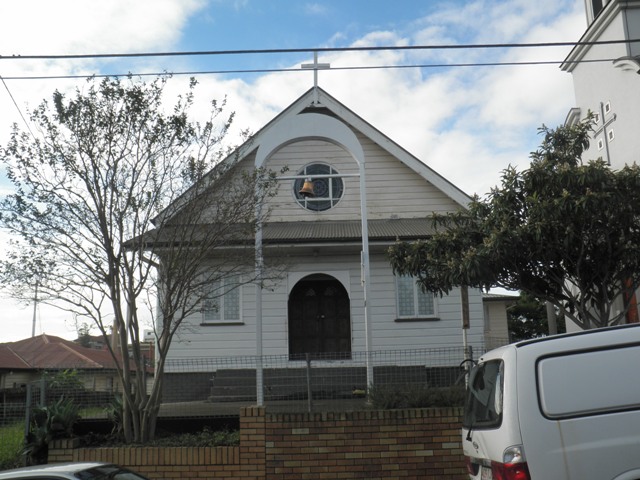 The church on this site is associated with the Serbian Orthodox Church, having been purchased by that religious organisation in 1974. Prior to that, it was a Methodist Church.

The church had a corrugated iron-clad gable roof with three ridge vents. The side windows were pointed arches with a fixed glass top and three pivot sash windows under. The eaves were supported by arched brackets. The front gable end had a collar tie and a finial that extended downwards to form a pendant. Within the gable end walls was a circular stained glass window. The front porch was symmetrical with two street-facing gables over the two identical entries to the porch and was highly decorative. The church was low-set on stumps and had a picket fence to the street.

The church was administered by the West End Primitive Methodist Church Circuit until 1924 when it was transferred to the control of the Annerley Methodist Circuit. In June 1935 Jubilee celebrations were held for the church. As a result of these celebrations, it was decided to undertake a major renovation of the building. Brisbane architect WJE Kerrison was commissioned to renovate the church, which led to the front porch becoming a vestibule enclosed with a combination of dark timber battening and sheet paneling, lending a fashionable Old English air. The side windows were replaced with fixed stained glass.

These renovations took two months to complete at a cost of £266. A rededication service was held on 14 August 1935. Reverend TC Rentoul, the Director of the Methodist Inland Mission carried out the ceremonial opening of the church doors. In later years a church hall was added to the site behind the church for the use of the Girls’ and the Boys’ Clubs, the WCH Society and for the conducting of Sunday school lessons. In 1956 a memorial brick wall was built at the front of the church and the building was repainted. The church played a central role in the religious and social life of Methodists in Woolloongabba. Family names associated with the church included Nilmer, Beeston, Peterssen, Exley, Low, Rowton, Dahl, Clarke, Block and Roe.

By the late 1960s the number of people attending the Merton Street Methodist Church had dwindled due to Woolloongabba’s decline as a residential area. By this time large numbers of migrants from eastern European countries had moved into the West End/Woolloongabba area. Members of the Serbian Orthodox religion began to use the church and on 19 April 1974 this community purchased the property and it was renamed St Nicholas (Nikolas) Church.

The Serbian Orthodox community made minor changes to the church. The porch was altered to a simple skillion roof and its cladding and windows were replaced. The rear of the church was separated from the hall and bricked. A new church hall and priest’s house were added to the site. A tall freestanding metal arch with a decorative cross finial was built at the front of the church that holds a bell. In the 2000s a large masonry church was built to the east of the original church.

Until the construction of the new church beside, the church remained the primary place of worship for the Serbian Orthodox Ecclesiastic School Community in Brisbane for more than 30 years. Many prominent Serbians have been associated with this church, including members of the Ilic, Mirkovic, Crnomarkovic, Licina, Grubnic, Milic, Bojic, Aleksijevic, Djudurovic, Popadic, Mircic, Nikolic, Crnjanin, Petrovic, Milosevic, Jovic, Kostadinovic, Jankovic, Gojkovic, Radovic, Stojcinovic families.

This is a late nineteenth century, timber church. Although its front has been altered slightly externally, it has retained much of its original form and characteristic features.

The roof is a steeply pitched gable with overhangs, which are supported by arched timber brackets on the sides. The walls are clad with weatherboards and it has pointed arch side windows with stained glass. The front of the church is clad with chamferboards and features a central circular window and the gable end has a cross finial. The church has an enclosed front porch.

Internally, the church is relatively intact in its 1880s form, retaining a lofty open nave and featuring boarded linings and exposed timber trusses.

as an attractive 1880s timber church with characteristic architectural features.

as a place of worship for the local Methodist community for almost ninety years and the Serbian Orthodox Ecclesiastic School Community for more than thirty years.