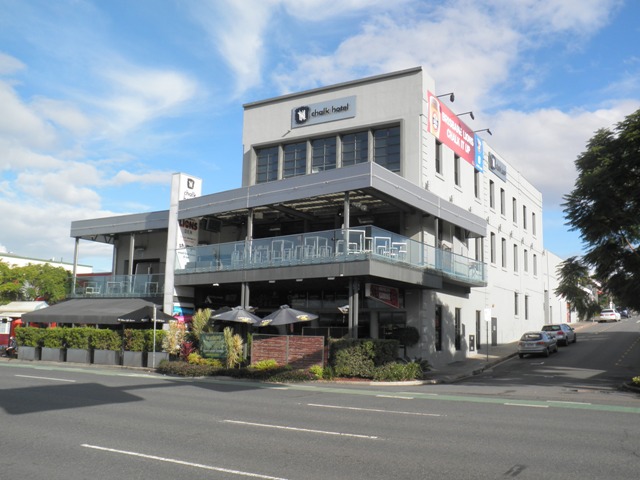 The Railway Hotel was constructed circa 1889 for local businesswoman and entrepreneur Mary Tynan. Mary engaged prominent architect Richard Gailey to design the three-storey brick hotel, which upon construction was leased out to various publicans. Mary remained the sole owner of the hotel until her death in 1907 and by 1908 title of the property had been passed to the Fearron family. In 1918 the hotel was purchased by Castlemaine Brewery and Quinlan Gray & Co Brisbane Limited who retained ownership of the hotel until 1976. The former Railway Hotel is now best known as the Chalk Hotel.

James Reid, after whom Reid Street is named, began to subdivide his ten acres of land, comprising eastern suburban allotments 73 and 74, in 1865. Labourer, John Tynan purchased Subdivision 6 of ESA 74 in April 1871. This 18 perch allotment was adjacent to the site of the present Railway Hotel. The Tynan’s were resident there from at least 1878, but probably earlier. In August 1878 John Tynan died, leaving Mary to provide for her children.

The month following his death, Mary Tynan acquired the neighbouring block of vacant land, Subdivision 5 of ESA 74, probably as an investment. In April 1882 Mary borrowed £50 from the Corporation of the Brisbane District Branch of Independent Oddfellows Manchester Unity Friendly Society. The loan was presumably to establish the grocery business that she operated from her home from 1882. By June1889 Mary Tynan had repaid her loan, and then began to further consolidate her financial position.

The extension of the South Brisbane railway and the construction of the Woolloongabba Goods Yard during the 1880s, no doubt provided Mary Tynan with an opportunity almost literally on her doorstep.

During 1889 she engaged prominent Brisbane architect Richard Gailey to design a hotel to be erected upon subdivision 5. The three story brick ‘Railway Hotel’ was erected by 1890. In March 1890 she was issued a Victualler License, current only to 30 June 1890. In the following month Mary took out a mortgage of 6000 to the Brisbane Permanent Building and Banking Company, Limited, presumably to finance the erection of the hotel.  On the same day she leased the property to publican James Kelly, to whom she transferred her license in July 1890. The lending of such a large sum to a woman at that time might be considered highly unusual, and would appear to indicate strong confidence in her entrepreneurial abilities.

Renowned for the number of its hotels, Brisbane had 117 hotels to service a population of just over 47000 in 1881. Other hotels in the immediate vicinity were the Buffalo Inn (1864), Woolloongabba (1868), Burkes (1891), Broadway (1890), Clarence (1864), Norman (1890).  According to Lawson, public hotels functioned primarily as working men’s clubs. As the population in Woolloongabba grew, and local industries such as the Dry Dock and the rail yards developed, the Woolloongabba Hotel would undoubtedly have fulfilled an important club function for those living in the vicinity.

In the decade following 1890 the Railway Hotel passed through the control of a number of lessees, though Mary Tynan remained the owner. In 1901 the lease was transferred to Perkins & Co Limited, an early indication of the interest in outlets by the brewing companies. The lease went back to an individual again shortly afterwards.

In August 1907 Mary Tynan died at the age of sixty-four. By June 1908 the Railway Hotel had sold, and the new owner Matthew Fearron used the property as security for a 6000 loan from The Brisbane Permanent Building and Banking Company Limited. It remained in Fearron family ownership until 1918, when the Castlemaine Brewery and Quinlan Gray & Co Brisbane Limited obtained title. Castlemaine operated the hotel until 1976 when the brewery began to divest itself of assets.

Although this building has undergone alterations and refits over the years – it is not known when the verandahs were removed - the basic form of the exterior is still apparent and elements of the original detailing remain intact. Freeland has argued that pubs are among the most socially significant, historically valued, architecturally interesting and colourful features of Australian society. The Railway Hotel provides evidence of these attributes.

This is an example of a converted late nineteenth century Hotel building built on the street alignment of Stanley and Reid Streets in Woolloongabba.

The structural expression of Hotel buildings developed as part of the building boom of the 1880s. The ‘Railway Hotel’ was an outstanding example of Victorian Classic Revival in its day. The whole front facade was clothed lavishly in cast iron hiding the simple building in shade.

The verandahs to this building have been removed.  Presently, the front face of the main building is of three-storey rendered brick construction with a symmetrical street frontage above the awning line.  The windows located along the Reid Street elevation have deep reveals characteristic of the Victorian-style of architecture used in the period of construction. Original french doors to the Stanley Street façade have been replaced by large windows within a projecting frame.

The existing parapet is plain and no longer incorporates the age of the building in raised lettering.  A suspended awning has replaced the once sloping corrugated iron awning and supporting Corinthian posts.

as a hotel constructed in the late nineteenth century during a hotel building boom in which many of Brisbane's finest and most well-known hotels were constructed and hotels became an iconic feature for which Brisbane was renowned.

as a hotel designed by influential Brisbane architect Richard Gailey who designed a number of Brisbane's landmark buildings.

View of the Railway Hotel situated on the corner of Stanley and Reid Streets, Woolloongabba. The hotel was erected in 1889 for James Kelly and underwent extensive alterations in ca.1958. The name was changed to the Recovery Hotel in 1977.
(Description supplied with photograph)