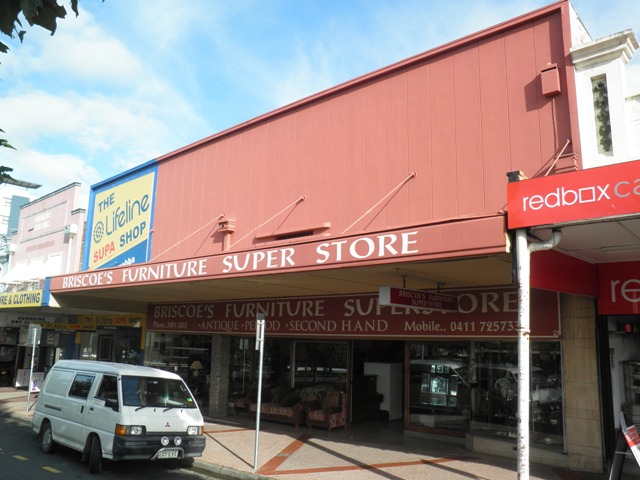 This conjoined two-storey shop building was constructed circa 1895 for George Gough and Robert Skerritt Exton who had purchased the block in 1891. From 1909 to 1954, at least one of these buildings was leased and/or owned by Tacey and Co, one of the longest serving drapery businesses on the southside. Woolworths also operated a retail outlet from one or both of these buildings from 1939. Despite the concrete facade erected by Woolworths in 1956 when the buildings were joined together, the original 1890s buildings remain largely intact.

This site is part of a 5-acre crown land purchase made by James Reid of “Camboon” in May 1854. This land, classified as South Brisbane Eastern Suburban Allotment 73, was subdivided by Reid in May 1865 after he had purchased the adjoining Allotment 74. In September 1871, Patrick McLea purchased subdivision 15 off Reid. Reid sold subdivision 16 to Charles Mullen in April 1872.

William Underwood purchased Lot 16 in November 1876 and he passed it onto a relative, Frances Underwood in 1897. Thus Lot 16 remained in the hands of the Underwood family until July 1900, when they sold it to James Brown of Gympie. During the same period, Lot 15 saw numerous changes of ownership. Frederick Thompson purchased Lot 15 in September 1886 and within two hours he had resold it to Charles Clark, Richard Hargrave, and Mathew Buscall Griggs. They in turn sold the land, in January 1890, to Thomas Lee, who, with his partners James Robertson, Ross and Edward Orjinand and Walter Hill, disposed of Lot 15 to Thomas Lane in December 1890. Then in July 1891, George Gough and Robert Skerritt Exton purchased Lot 15 and held it for the next 27 years. A two-storey shop was erected on Lot 15 and Lot 16 in the mid-1890s. The pattern of the pressed-metal ceiling which can still be seen in the shop that was built on Lot 16 dates that particular building to circa 1895.

In October 1910, Thomas Henry and Mary Jane Blackburn bought Lot 16. Then in November 1918, Ernest St. Lawrence Tacey bought Lot 15. Tacey had been renting a shop on this site since 1909. With his partner John Sleep, Tacey ran a clothiers and drapery from Lot 16, which had the street address of 775-77 Stanley Street. Next door at 779 Stanley Street (Lot 16), the Blackburns leased their shop to Walter B. Blocksidge a real estate agent, who had been dealing from that address since 1908. By 1918, Tacey’s shop was in the commercial hub of Woolloongabba, with the post and telegraph office and Bank of New South Wales nearby, while the block containing Tacey & Co also accommodated a B.A.F.S. chemist, a piano shop, cabinet maker, baker, fruiter, butcher and milliner.

In 1916, the London Optical Company rented the premises at 779 Stanley Street. The next year, B.T. Francis took up this lease and ran his optician practice from there until 1922. During 1919, David Webster also leased part of the building thus beginning a period of multiple occupancy of this site. Webster used the top floor of the two-storey shop as a dance hall but when he tried to sublease the floor to Tacey and Sleep, the Blackburns intervened. In June 1923, the Blackburns leased Webster’s space for the next six years to Tacey & Co thus giving it premises at both 775 and 779 Stanley Street. The extra room allowed Tacey & Co to operate both a cafe and a drapery. Then in April 1925, James and John Henry McDonald subleased part of the ground and top floor of 779 Stanley Street, to establish another cafe. Tacey & Co soon found that it had serious competition on its own doorstep and the Tacey cafe closed in 1927.

In July 1926, cabinetmakers E. Crafti & Co Ltd purchased 779 Stanley Street from the Blackburns. It passed to Goodwins Ltd in January 1929, then to Edwin Cashmore Corbett in March 1933, before being sold to Neville Richard Fogarty of Hamilton in October 1934. This rapid turnover in ownership of the site, caused probably as a result of the economic downturn experienced in the Great Depression, was also mirrored in the changing tenancies of the 779 Stanley Street shops. When McDonald’s cafe closed in 1930, it was replaced by pastry cook H.G. Lait in 1931, S. Nittes fish and chip shop in 1932, M.V. Lynachan’s haberdashery in 1934 and Isobel McMain’s cafe in 1935. By November 1938, McMain’s cafe was sharing 779 Stanley Street with Claude Archibald Fraser and William James Park’s small business.

During the 1920-30s, Tacey & Co continued to have its main shop at 775 Stanley Street. After Ernest Tacey died on 30 June 1933, the title deed passed to his widow Annette, while their son Ernest Vincent Tacey took over the family company. But the advent of chain stores such as Woolworths saw the demise of many such family businesses. Established in 1924 in Sydney, Woolworths opened its first Brisbane store in the CBD in 1928. In February 1939, Woolworths signed a twenty-year lease on the Tacey family’s 775 Stanley Street store. This would have been one of the first suburban Woolworths stores to be opened in Brisbane.

The front facade of this two-storey commercial building has a tall masonry parapet wall with vertical groves and a thickened edge. Towards the right side is a series of horizontal slats that conceal a small window behind. An awning shades the footpath and the lower floor, attached with metal rods to the upper portion of the parapet wall. The ground floor has been fitted out as per the present shop usages but with large display windows comprising the majority of the exterior facade. The walls and columns visible within the elevation are clad in a variety of white and grey small ceramic tiles. Signage has been painted on the parapet wall, awning edge and above the display windows and doorways to the shops.

The interior shows the existence of two separate buildings of similar size but the original brick dividing walls have been removed. In their place is a flimsy wall placed in such a way that it has created one large and one smaller shop space. Evidence of the upper floors of the two original buildings remains, as there exists a split-level second storey at the back of 777 Stanley Street. The ceiling above this second storey is pressed metal. It features a ceiling rose design containing a flower astride a six-pointed star within a square border. The main pressed metal panelling is a “Wild berries” design. It is likely that this is an 1895 pattern manufactured by Ernest Wunderlich’s Patent Ceiling and Roofing Company of Sydney. Ian Evan’s 1988 book Caring for Old Houses states on page 121 that “much of the pressed metal made in Australia constitutes an irreplaceable resource. Few of the patterns will ever be reproduced.”

The materials and form of this commercial building is consistent with the pattern of Stanley Street and its commercial usage.

as an 1890s suburban commercial premises that has been occupied by a variety of retailers over the past century including Woolworths and well-known drapers Tacey and Co.

as a commercial premises occupied by drapers Tacey & Co and retailers Woolworths, both of which are of importance to Woolloongabba's social and commercial history.