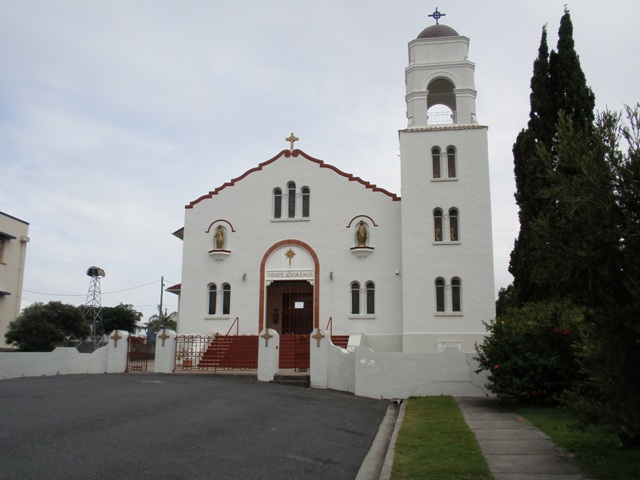 St Luke’s Catholic Church is a fine and rare example of a Spanish Mission style church designed by Brisbane architect Frank L. Cullen. It was constructed as part of Archbishop Duhig’s extensive building program for the Catholic Archdiocese of Brisbane and is part of a Catholic precinct of educational and spiritual buildings that has served successive generations of Catholics in Woolloongabba. Its prominent position on a hilltop at the end of Taylor Street makes a fine contribution to the streetscape.

St Luke's Catholic Church at Woolloongabba was opened in 1937 by the Apostolic Delegate, Dr Panico, accompanied by Archbishop Duhig and the Rev Dr English. Designed by Brisbane architect F.L. Cullen and built in the Spanish Mission style, the church provides an impressive termination to the vista along Taylor Street. Frank Cullen, a relative of Archbishop Duhig, was responsible for the design of several Catholic churches in the post-war period.

The Buranda district developed rapidly during the 1880s economic boom when many businesses were established along Logan Road and Ipswich Roads. By the outbreak of World War One in 1914, Buranda had recovered from the floods and economic depression of the 1890s and developed as an industrial, commercial and residential area.

Prior to the construction of St Luke's, Buranda, the Catholic community in the area was part of the parish of the combined districts of Coorparoo and Ipswich Road formed in 1913 when Father J. O'Leary was appointed the first parish priest. The early decades of the twentieth century were a period of building and expansion for the Catholic Church in south-east Brisbane with St James's Church-School at Coorparoo opening in 1913, the opening of the first Mary Immaculate Church-School at Ipswich Road in 1914 and St Benedict's Church opening at East Brisbane in 1917. Between 1913 and 1936 the Catholic Church, led by Archbishop Duhig, established sixteen new parishes on Brisbane's south side and built seventeen new churches as part of his drive to establish Catholic facilities in all areas of Brisbane. Initially, timber church-schools were constructed due to financial considerations, and although timber buildings continued to be erected during the 1920s, more substantial brick churches began to be built at this time. The parish of St Luke's, Buranda, was formed in 1937 with the opening of their new brick church. Father Costello was appointed the parish priest.

According to a contemporary report in the Courier Mail, Duhig had "for several years ... had his eye on the site, and finally had succeeded in purchasing it from the Reis family". Previously, the site had been the home of Monsignor McKenna of Toowoomba. Duhig donated the site to the parish for the purposes of building a church. The building contract was awarded to K.D. Morris for £2,900. A house on the site was removed and a campaign to raise funds for the establishment of new churches provided £2,500 towards the cost of building St Luke's. The parishioners of Buranda subscribed more than £200 towards the cost of the church prior to the ceremony, a significant amount considering the severe economic depression of the period.

The foundation stone of the new church was laid by Duhig on 20 December 1936. A sum of more than £100 was collected at the ceremony.  The opening of a church by the Apostolic Delegate was a significant event in the life of the Catholic Church. The opening and blessing of St Luke's took place on 11 April 1937, in the presence of several senior members of the Catholic Church of Queensland. A crowd of between two and three thousand attended the opening.

Like many other Catholic parishes in Brisbane, St Luke's has provided a centre for social, spiritual and educational activities for Catholics in the local community for many decades. St Luke's school, which opened in 1949 in a building also designed by Frank Cullen, closed in 1977 as there were several schools serving the area. The two residences adjoining the church site are the presbytery and the former convent. Both buildings were purchased with the land. Today, the school building is used for parish meetings, and as a venue for plays performed by the Villanova Players theatrical group. The suburb of Buranda was physically divided in the early 1970s by the construction of the South East Freeway which passes only a block from the rear of the church. Despite this disruption, St Luke's continues its role as a focus for Catholic worship at Buranda.

The church is rectangular in plan form with an attached bell tower on the north eastern corner. A later addition at the western end provides a chancel and vestries.

The external walls are constructed in brick, rising from a rendered brick plinth. The high walls are strengthened internally by the use of pilasters. Tie rods under the roof trusses tie pilasters on opposite sides of the building together. All brick walls are rendered.

The pitched roof is sheeted with terra cotta pantiles. The exposed rafters to the unlined eaves overhang are decorated by the shaping of an ogee mould into the underside of the rafter.

The eastern end is terminated with a parapeted gable, the parapet capping being slightly decorative and containing a cross finial mounted on the apex. This east elevation comprises a central entry porch opening, coupled lancet type windows positioned on either side of the entry, aedicules above these windows and three lancet type windows located centrally above the entry porch.

The porch entrance is defined by a face brick lined jamb and semicircular arch. The lintel and panel over the entrance opening being supported on concrete volutes. Security to the entrance porch is provided by a pair of decorated mild steel gates incorporating quatrefoil motifs.

The windows to the front are lancet type windows with semicircular arch heads and are united by a pier which is faced with a half column complete with base and capital. These timber framed windows contain lead lighted casements with fanlights above.

The windows to the nave are coupled lancet type windows with semi-circular arch heads. The timber framed lead-lighted windows comprise a combination of lower casement and upper hopper with a fixed fanlight over.

Doors to the main front and side entries are framed vertical joint timber doors. As the nave is elevated above the slightly sloping ground level all doors are accessed by means of concrete steps, each containing a central pipe handrail. No provision is made for access by the disabled.

The square bell tower contains three levels of coupled lancet type windows on the eastern and north sides. These windows are of similar detail to those in the eastern parapeted gable front. Positioned on top of this tower structure is a rendered brick belfry containing four openings each with a semi-circular arch head.

The transition between tower and belfry is roofed with terra cotta pantiles identical to those covering the nave roof.

The belfry is decorated with three bands of copings. The first is located at the springing line of the semi-circular arches with the next band at a point above the head of the arches where the belfry walls are slightly stepped back. The final band is located at the top of the wall at the base of the metal sheeted cupola. A metal finial is mounted on the top of the cupola. Protective, fabricated mild steel balustrading is installed in each opening to the belfry.

The rear timber framed extension is sheeted externally with weatherboards and the pitched roof sheeted with pantiles similar to those used over the nave. The chancel extension rises above the vestry roof and is separately roofed with a pitched pantile roof. This chancel contains two stained glass windows in the western wall and are located either side of the altar.

The internal pilasters are finished on either side with quarter round columns terminating at the top with a capital under a rectangular impost block. Five exposed timber trusses with king post tie rods support the roof framing. The nave and entry porch ceilings are sheeted with fibrous cement with timber cover strips over joints.

Internal walls are rendered and painted. The timber floor to the nave is sheeted with vinyl tiles along the aisles and walkway areas.

For the evidence it provides of the development of the Woolloongabba area.

As an attractive, architect-designed Spanish Mission style Catholic church that makes a fine contribution to the streetscape of Taylor Street.

As a rare example of a Catholic church built in the Spanish Mission style in the 1930s.

For its association with Archbishop Duhig, being built at the height of the era of Church expansion under his influence and as an early example of a church designed by Frank Cullen.