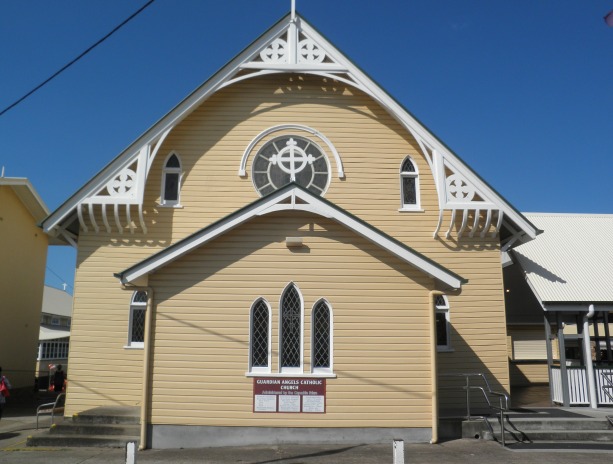 The Guardian Angels Catholic Church was opened by Archbishop Dunne in November 1905. Prior to this time local Catholic parishioners worshipped in the Wynnum Town Hall. The small timber church was designed by architects Eaton and Bates in the Federation Carpenter Gothic style and, prior to development of the surrounding area, had an excellent view of Moreton Bay. A parish school designed by prominent architect Richard Gailey was constructed in the grounds of the church in 1914 and now serves as a school hall. A presbytery was also built here in 1914, however it was later removed. In 1940, architect Frank Leo Cullen carried out improvements to the church which included the addition of a sanctuary and two sacristies. The current presbytery and parish centre, built in the 1980s, are not included in this heritage listing.

The Guardian Angels Catholic Church was officially opened by Archbishop Dunne in November 1905. It was the first church to be built on the site that was described in the Brisbane Courier of the time as "a magnificent one on an eminence overlooking Moreton Bay".

While a history of the church published in 1955 gives Richard Gailey as the architect for the church, a contemporary report in the Catholic Age newspaper several days after the opening of the church records Messrs Eaton and Bates as the architects. Eaton and Bates had previously had commissions from the Catholic Church in Queensland including the church in Barcaldine (1898), and additions to St Joseph's Cathedral, Rockhampton (1899). Richard Gailey was responsible for the design of the school associated with the Church of the Guardian Angels which opened in 1914.

The first land sales at Wynnum took place in the 1860s. Development in the area continued during the 1880s, with several residential estates for sale. The opening of the railway to Cleveland in 1889 was the stimulus which saw the district develop into a popular seaside resort by the turn of the century. A second railway station, Wynnum South, opened in 1898. At this time, the district had a population of some 200 with around 50 dwellings. Wynnum, previously administered by the Divisional Boards of Bulimba and then Kianwanah, was created as a Shire Council in 1902. In 1913, Wynnum Shire was raised to the status of a town. As the population of the district grew, churches were founded to cater to the needs of the community. The first churches to be established in the area were the Anglican, Methodist and Catholic denominations.

Prior to the erection of the Guardian Angels Church, mass was celebrated in the Wynnum Town Hall by Fathers Dorrigan and O'Leary, who travelled from South Brisbane. The district of Wynnum was originally administered by the Parish of South Brisbane. Father Thomas Enright was in charge of the area from 1904. At this time, the Wynnum area came under the umbrella of the Logan and Albert Parish. Under the guidance of Father Enright, a committee was established for the purposes of procuring a site and the funds for a church. The site of the future church, school and presbytery was purchased by Archbishop Dunne for £420 and donated to the parish. The committee then turned its attention to raising funds for the construction of a church.

In early April 1905, the foundation stone of the new church was laid. Archbishop Dunne was to have been present but was unable to attend. Father Enright was delegated to perform the ceremony in the place of the Archbishop. After the ceremony, £50 was collected towards the building fund. This sum was added to the £260 which had already been collected leaving only £90 remaining of the estimated £400 needed. One substantial donation came from Rev Molesworth, the minister of the Wynnum Church of England. The contractor for the building was Mr J.P. Little of Ipswich. The contract price for the church was £425.

The church was officially opened and dedicated to Our Guardian Angel on 26 November 1905 by Archbishop Dunne. An "immense congregation" was present at the ceremony, some of whom travelled to the opening from Brisbane by train. The church's position at South Wynnum made it ideally situated to serve the people of Manly, Wynnum and the surrounding district. Archbishop Dunne congratulated the people of the district for their achievement of opening their church almost free of debt. A collection taken up on the day realised around £80, including £1/1 from Father Duhig, then Bishop-elect of Rockhampton. Extras such as seating increased the cost of the church to £500. The church was one of the first buildings to be erected on this ridge and much of the surrounding area remained bushland during the 1910s.

The church, which could accommodate 400 people, was built of Queensland hardwood, lined with pine. The interior of the church was painted in "delicate shades of cream and pale green". The importance of the church to parishioners is suggested by their gifts to the church which included a stained glass window above the altar, a holy water font and a bookstand.

In 1913, when Wynnum was formally made a parish, Father Enright was appointed parish priest. From 1911, he also had the care of the Cleveland district until 1919 when his health deteriorated. Father Enright died later that year. The parish continued under the care of Diocesan priests until 1945, when it was transferred into the care of the Capuchins, an order of priests who were brought to Wynnum from America to cater to the needs of local Italian settlers who could not speak English.

A parish school, designed by Richard Gailey, was opened in the church grounds in 1914. The foundation stone of the building, which cost a total of £1,105, was laid by Archbishop Duhig on 3 May 1914. The archbishop returned for the official opening on 4 October 1914. By the end of that year, 109 children were enrolled in the school. Several school buildings have been added to the site in succeeding years. The original school building now serves as a hall. The former presbytery on this site, built in 1914, was moved to Nanango and replaced by a modern presbytery and parish centre in the late 1980s.

On 8 August 1915, a two-storey brick convent was opened on a site opposite the church for the Sisters of Mercy, who since 1903 had travelled from Brisbane to instruct the youth of the district.

The convent, named Mt Carmel, was designed by the Brisbane architectural firm of Hall and Dods. Mt Carmel College, a secondary girls' school opened by the nuns in 1957 closed in 1992 due to the declining number of school aged children in the district.

In 1940, improvements to the church, presbytery, convent and school were carried out. This work was blessed by Archbishop Duhig on 25 August 1940. Extensions to the church which included a sanctuary and two sacristies, were designed by Brisbane architect F.L. Cullen, and cost £800. The contractor for the church extensions was H. Doyle of Ascot.

This Federation Carpenter Gothic style church is located close to the Bay Terrace street frontage in the centre of the site. Other buildings and facilities on this site include presbytery, car park, school hall (former primary school), classrooms, playground and netball court.

The symmetrical fronted single storey building is rectangular in plan form with a small entrance porch attached to the western end. Later extensions to the original building include the addition of confessionals to the nave on the northern and southern sides and vestries attached to either side of the sanctuary.

Photographic evidence indicates that the western porch had been enclosed and the projecting gable altered, prior to 1952. This alteration most probably took place at the same time as the construction of the confessionals since the projecting gable details were identical. Subsequent alterations have resulted in an enlarged, enclosed porch with a flatter pitched roof.

The chamferboard clad timber framed building is seated on concrete piers and a brick base wall across the front. Vertical timber battens fixed between piers provide security to the underneath area of the building.

The steeply pitched roof is sheeted with ribbed metal decking, similar to Spandek, and is a replacement of an earlier roofing material. Three dormer-type ventilators with fixed timber louvre vents along each side of the ridge line allow ventilation to the roof space.

The eaves overhang along each side of the nave, which is supported on timber struts, and around the sanctuary is unlined. The eaves soffit to the projecting gable at the western end is lined with tongue and groove boarding.

The front decorative projecting gable is supported on shaped timber brackets and the decoration incorporates fretwork quatrefoil motifs at the apex and the bases of the gable. Timber framing in the shape of a semi-circle link these decorative features together. A timber cross is fixed to the apex of the gable.

The western gable is dominated by a stained glass wheel window installed above the entry porch roof. A semi-circular timber label mould is mounted above this window. A small lead lighted window with lead lighted pointed arch fanlights is located each side of this wheel window.

Projecting gables to the side confessionals are decorated with vertical timber battens supported on a shaped timber frame. The gable eaves are lined with tongue and groove boarding and the side overhangs lined with flat fibro cement sheeting.

Windows to the confessional consist of timber framed casements glazed with opaque glass on the northern and southern sides and aluminium framed sliding glass (opaque) windows on the eastern and western walls.

Entrance doors on both sides of the porch are flush sheeted doors with routing to represent framed panelled doors.

Access to the porch doors is by a small concrete ramp on the southern side and concrete steps on the northern side.

The concrete floor to the entry porch is covered with mosaic tiles.

The timber floor to the nave is covered with slate tiles to the area under the pews and elsewhere the floor is carpeted. The raised floor to the sanctuary is also carpeted.

Three timber, rose shaped ventilators are installed in the ceiling crown to allow air relief to the nave. In addition, pairs of ventilating panels are installed in each truss bay in the second lowest segment along each side of the nave.

The structure is stiffened by the installation of four king post tie rods. Ceiling fans are suspended from these tie rods.

The ceiling to the sanctuary is lined with flat fibro cement sheeting with timber cover strips over the sheet joints.

Access to the choir gallery is by way of a narrow flight of timber steps located in the south west corner of the nave. The choir floor framing which provides four stepped levels is supported on two dressed timber columns complete with stop chamfers and moulded timber cornices and skirtings.
The timber balustrade to the front of the choir incorporates a quatrefoil motif.

The building is in sound condition and has been well maintained.

The former old primary school building which is now used as the school hall is a high set timber framed building with surrounding verandas. The building has undergone minor modifications to suit its present use.

as one of the first churches to be built to serve the needs of the growing population of Wynnum at the turn of the 19th century.

as an excellent and relatively intact example of a Federation Carpenter Gothic timber church.

for the church's fine proportions and detailing which make the building a striking presence in Bay Terrace.

as a centre of worship and education for the Catholic community of the Wynnum area since the early 20th century.